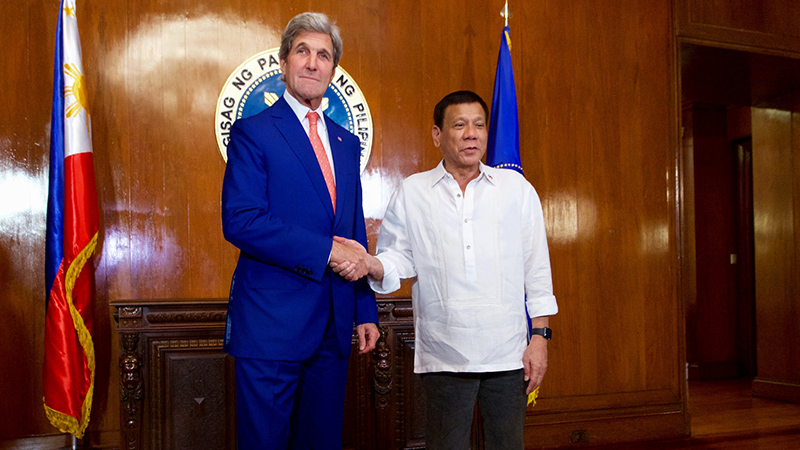 President Rodrigo Duterte (right) is pivoting away from the US towards China (Pic: State Department/Flickr)

Philippines president Rodrigo Duterte backed down on his threat to ignore the Paris climate deal after a meeting with top US diplomat John Kerry.

The Manila Sun Star news agency reports Duterte and Kerry spoke on 27 July during the US secretary of state’s visit to the capital, where they discussed climate change.

“The President said in one of his interviews before that he was not in favour of this because of our economic situation in the country,” said Duterte’s head of communications Martin Andanar.

“But after the President spoke with the Secretary of State John Kerry the President said that as long as it is fair to our economic situation, then everything should be okay.”

The website quoted another government official as saying Kerry had been “helpful in defining certain issues about the Paris pact.”

Duterte’s criticism of the 2015 Paris climate deal on 18 July received global coverage. The new president had claimed the pact would “stifle” economic growth across the country.

Filipino climate activists say the country’s carbon cutting pledge at the Paris summit is too weak and will lock it into long term use of fossil fuels.

“It smacks of hypocrisy to claim that we will cut emissions by 70% – but only if our palms are greased by largesse from the international community,” he said.