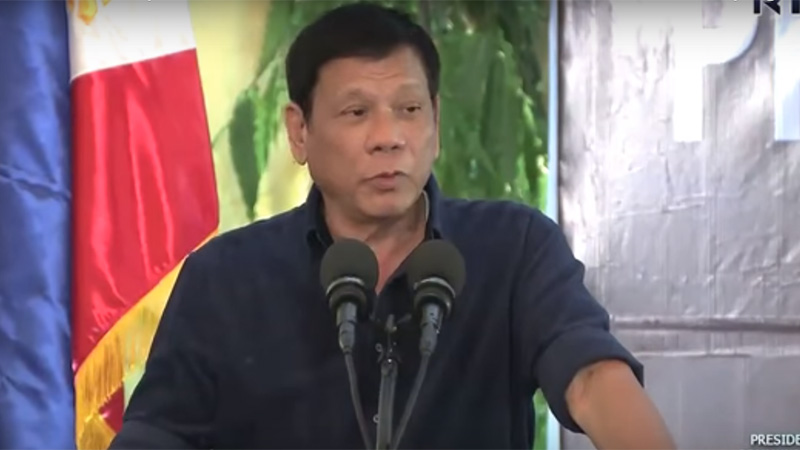 The Philippines will not honour commitments it made under the Paris climate change deal, president Rodrigo Duterte said in a speech on Monday.

“You are trying to stifle us,” Duterte said in widely reported comments. “That’s stupid, I will not honour that. You signed… That was not my signature.”

Agreed by 195 countries including the Philippines last December, the UN pact aims to limit warming to well below 2C from pre-industrial levels.

It comes into force when 55 countries covering 55% of global emissions formally join. The Philippines accounts for less than 1% of the world’s emissions, and has not ratified the deal.

President Duterte said he felt like attacking an ambassador to the Philippines at a recent meeting, after he was asked about plans to cut the country’s greenhouse gas emissions.

“I’m mad at this ambassador. I want to kick him,” he said. Limits on carbon emissions for the Philippines were “nonsense,” he added.

“You who have reached your peak and along with it spewed a lot of contaminants, emissions… Good for you. We are here, we have not reached the age of industrialisation. We are on our way to it.”

PH climate submission is conditional on support. Meaning, no support no carbon reduction. Pres Duterte probably taken out of context

Lucille Sering, a former climate negotiator, said the country’s action plan had always been contingent on financial and technology support.

The president’s remarks were “probably taken out of context,” she tweeted.

It is not the first time Duterte has criticised the international climate agreement, however. He previously accused the UN of being “hypocrites” for fixing a pact which requires all countries – not just the rich – to make greenhouse gas cuts.

The UN deal also encourages countries to develop better climate resilience strategies, vital for a nation as vulnerable to extreme weather as the Philippines.

Storms are likely to become more severe say scientists, raising the prospect of future catastrophes like Typhoon Haiyan, which left over 6000 dead in 2013.