Does Glencore’s business model work in a 2C world?

Coal producers face an uncertain future. Demand will grow in some parts of the world, in others it will fall. Business needs to be ready for both eventualities

This was in response to shareholder pressure to report transparently on risks and opportunities posed by climate change.

Glencore, as the world’s largest producer and trader of seaborne coal, has been a particular target for activities, analysts and investors arguing that the transition to a low-carbon energy system could threaten its business model.

It’s a good thing that major companies, like Glencore, are starting to look seriously at the implications of climate change for their business models. In this spirit, this article examines some of the arguments made.

Firstly, it argues that the coal reserves valued on the company balance sheet are not the same thing as its much larger potential resources, not yet valued on its balance sheet, and that implicitly the 2C constraint applies only to the longer-term to resources.

Thus Glencore has ‘investment optionality’ to invest in converting ‘resources’ to ‘reserves’, rather than committed assets that risk being stranded.

It should be noted that Glencore writes that by 2030 its production base would decline by 25% without further investment to acquire new marketable reserves.

This implies that maintaining its asset base would require strategic long-term investment in production assets.

The ‘investment optionality’ noted above is going to be pretty short-lived; unless it exercises this optionality and invests in new resources, its asset base will decline and with it, shareholder value.

At the same time, exercising this option means taking a bet on the long-term market for coal beyond 2030. Moreover, the valuation of existing assets is affected by short-term price changes. In the short-term, these will likely not be due to climate change policy.

But by 2030, a point at which 75% of Glencore’s existing production base (which is valued on its balance sheet) will still be operational, this seems increasingly unlikely.

While climate policy may not pose a ‘quantity constraint’ on the marketing of these reserves, it may depress their price, and increasingly so by 2030.

This is fine, although it must be noted that the level of emissions achieved by even the most efficient coal technology (without CCS) is well above what is required from the power sector to limit warming to 2C, and that CCS technology is far from being developed at necessary scale.

But more relevant information, for investors at least, would be expected cost performance of coal technology versus other low-carbon technologies. Here, recent ultra-competitive tenders for renewable electricity for major emerging markets should give pause for thought.

Finally, it is argued that continued economic and population growth, coupled with urbanization and industrialization will drive continued growth in the seaborne coal trade, by 290 million tons (Mt) by 2030 to be precise. Let us look at demand prospects in three major importing regions.

China is going through a period of major economic transition, the outcome of which can already be seen in global energy markets. This trend is ineluctable: either headline growth will slow significantly, or the Chinese economy will reform and restructure.

Probably, there will be a hit to growth either way, at least in the short-term. McKinsey Global Institute contrasts annual growth of 2.9% in a continuation of the ‘investment-led’ economic model from 2015-2030, versus 5.0% in a ‘productivity-led’ economic model.

The latter would be both significantly lower than the recent historical average of ca. 10% over the last 15 years, and very significantly less energy intensive. Moreover, the structure of energy consumption would be different too (less in the industrial sector, more in the household and transport sectors).

Slower growth, less energy intensity, and a ‘tertiarization’ of energy demand: none of these trends is favourable to coal consumption. Add into the mix the war on local air pollution, at it seems possible, indeed probable, that Chinese coal consumption has already peaked.

The graph below shows net Chinese coal imports (left), and Chinese share of the global coal market (right). The boom and bust cycle is stark. Coal export is a capital intensive, cyclical industry: cycles of boom and bust are part of the game. 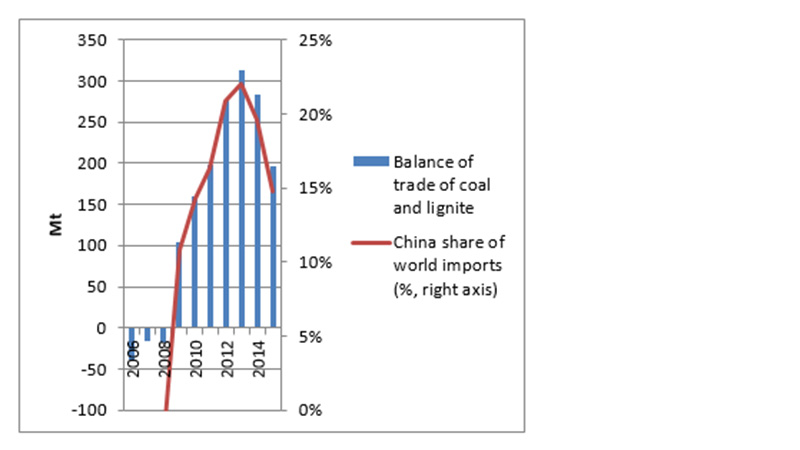 The problem is that this time the cycle was driven by China, a country of exceptional size and economic dynamism, and whose economic and governance model contained an inherent risk of massive misallocation of capital investment.

The IEA provides a vision of this scenario in its 2015 mid-term coal market outlook in its so-called ‘China Peak Coal Scenario’, in which Chinese domestic demand for coal falls from 4 billion tons in 2013 to 3.7 billion tons in 2020. Instead of increasing, global coal trade declines slightly to 2020.

The only thing is that China’s coal consumption has already fallen to 3.7 billion tons in 2015. It seems very reasonable to expect that Chinese coal imports will continue to fall.

Some might claim that this is not due to climate policy. This is true, but misplaced in the longer-term.

The slow-down and restructuring of the Chinese economy will facilitate a much cleaner economy: a much less energy intensive economy will make it much easier to decarbonize the lower aggregate energy demand.

Analysis: How China could peak CO2 emissions by 2022

India is a very different country to China. Its per capita GDP is just 1680 USD at market exchange rates (139th in the world), and energy consumption just 0.66 tons of oil equivalent per capita (76th in the world).

Surely India will ramp up coal consumption, and hence imports? India currently has 202 GW of installed coal capacity, and coal capacity grew at 10%/yr over the last five years. However, two indicators suggest that increases in electricity supply could be achieved, before needing to add significant new coal fired capacity.

The first is the low load factor for the coal fleet (and the power fleet more broadly) – coal plant load factor was 59% in 2015 and declining.

The second is the large losses in transmission and distribution, which were still high at 25% in 2015 but down from 37% in 2005. There is thus significant scope to supply more electricity without locking India into new coal fired capacity.

In the modelling project MILES, managed by IDDRI, India’s coal consumption is expected to more than double by 2030 (growth of 136%), under an ‘INDC type’ scenario, reaching about 1415 million tons of coal equivalent (Mtce). Total domestic consumption was about 600 Mtce in 2015, of which 28% was imported.

Let us assume for argument’s sake that this import ratio continued to 2030 (the Indian government has announced plans to become import independent, but let’s assume this is not achieved), Indian imports would grow by 228 Mtce by 2030.

Let’s turn to Japan, the US and the EU, currently responsible for almost a third of global coal demand. Studies such as the IEA World Energy Outlook or the MILES project, taking into account their climate targets, estimate that coal demand in these economies will fall by about 35-50% by 2030. This would be more than enough to offset the growth in demand and imports from India, with some margin.

The overall picture that emerges is of an uncertain future. Demand will certainly grow in some parts of the world, as demonstrated by the discussion above of India.

However, it seems possible perhaps probably that this would be sufficient to offset declines in the OECD world, and notably the emerging transformation taking place in China.

Are we still stuck in the ‘China syndrome’, expecting future growth in emerging markets to be as energy intensive as it was in China, despite China’s exceptionality and the now proven challenges of the Chinese growth model?

McKinsey, for example, recently revised downwards its global energy demand projections and stated: “The downgrading of our energy-demand outlook has material implications for investments, including decisions being made today”.

Their outlook sees coal demand growing slowly, and peaking by 2025. In this context, Glencore’s report might be questioned for not exploring possible futures and company strategies in such as world.

Thomas Spencer is Program Director Energy and Climate at IDDRI