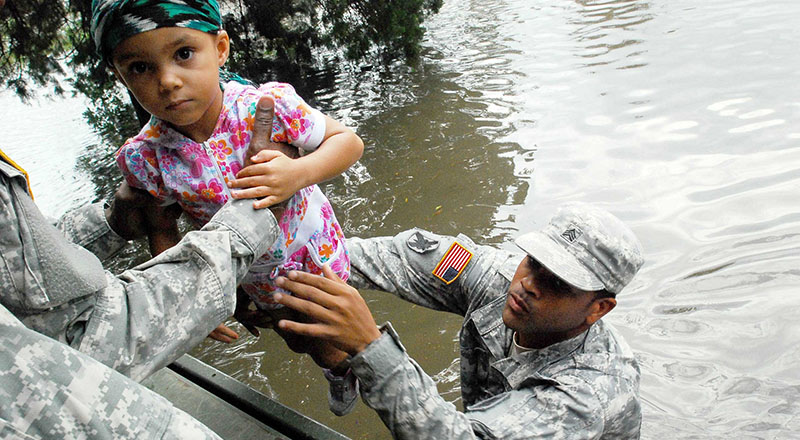 Sgt. Lee Savoy from the, Lousiana National Guard evacuates a child from the flood waters caused by Hurricane Isaac in 2012 (Pic: US Army/Flickr)

By the century’s end, millions of US citizens could become climate refugees.

A study of US counties vulnerable to sea level rise warns that if the coasts are not protected, the movement of people could match the scale of the 20th-century “Great Migration” of African-Americans from the south to the northern states.

And another study of vulnerability worldwide suggests that, everywhere, the chance of being affected by sea level rise has been underestimated. What matters in such calculations are the concentrations of population in the coastal zones.

Finnish scientists report that 1.9 billion people live within 100kms of the coast and lower than 100 metres above sea level. By 2050, this number will have increased to 2.4 billion, and 500 million will dwell less than 5 metres above the high-tide mark.

Studies such as these are not scaremongering, they are a sober attempt to provide basic information for city planners, coastal engineers and policy-makers.

Mathew Hauer, a population scientist, and colleagues at the University of Georgia in the US report in Nature Climate Change that they looked at the end-of-century population forecasts for all 319 coastal counties in the continental US to see who would be most at risk from storm surges and flood tides by 2100.

This is not the first such study. Researchers have previously made ominous projections on a global scale, and a number of US cities have been warned of the growing hazard.

But the implication of the Georgia research is that the numbers of those potentially vulnerable may have been underestimated.

Some of the fastest-growing communities face the highest risks. More than a quarter of all the people living in major cities such as Miami and New Orleans could face coastal flooding by 2100, unless steps are taken. In the Florida Keys, and parts of North Carolina, four-fifths of the population could be affected.

“The impact projections are up to three times larger than current estimates, which significantly underestimate the effect of sea level rise in the United States,” Hauer says. “In fact, there are 31 counties where more than 100,000 residents could be affected by sea level rise.”

His study invokes the great mass movement of African-Americans as a parallel to the migration that climate change will bring. Between 1916 and 1970, more than six million abandoned their homesteads in the rural southern states and moved to the crowded cities of the north.

Given that the resettlement of one Alaskan coastal village is put at $1m per resident, the cost of such relocation on a scale of millions could reach – at 2014 values – an estimated $14 trillion.

But rural hinterlands could, conversely, become steadily more important in a world of rising tides.

Matti Kummu, post-doctoral fellow in the water and development group at Aalto University in Finland, and his European colleagues report in Environmental Research Letters that while the planet’s people and their wealth are concentrated in coastal zones, the more sparsely-populated highland and mountain areas are likely to become increasingly important as food-producing regions.

Their study is a back-to-basics survey of economic and population geography in a century of change, and they too conclude that the hazards have been under-estimated.

They warn that even if the sea-level rise may have a limited effect overall, “our results indicate that effects on the economy and people may be substantial.

“Moreover, our findings suggest that food is being produced further and further away from where people live. As a result, more and more elevated areas of the globe might be experiencing increasing pressure to utilise land and water resources.

Read more on: US | Climate Refugees US