COMMENT: BC’s carbon pollution is going up while five other Canadian provinces are bringing their greenhouse gas emissions down 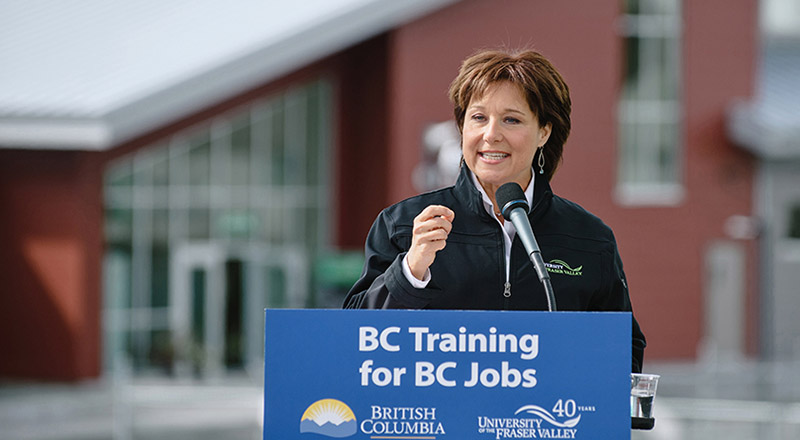 BC premier Christy Clark came to power in 2011 (Pic: University of the Fraser Valley/Flickr)

Whenever Premier Christy Clark is asked about her climate change plans, she touts the success of the policies put in place by her predecessor Gordon Campbell in 2008.

But Clark won’t be able to ride on Campbell’s “climate leader” coat-tails for much longer.

That’s because British Columbia’s carbon pollution is going up while five other Canadian provinces are bringing their greenhouse gas emissions down.

According to the latest projections from Environment and Climate Change Canada, B.C.’s emissions will climb from 64 megatonnes of carbon dioxide equivalent in 2005 to 72 megatonnes in 2020. The province’s legislated emissions target for that year is 43.5 megatonnes.

Meanwhile, Canada’s Second Biennial Report on Climate Change forecasts that emissions will fall in Ontario, Quebec, New Brunswick, Nova Scotia, and Newfoundland and Labrador between 2005 and 2020. Emissions will stay flat in Prince Edward Island and the three territories over that period.

Since taking over the premier’s office in 2011, Clark’s lack of action on the climate file has taken the province in the wrong direction. In 2013, Clark froze B.C.’s internationally lauded carbon tax for five years.

She continues to champion the development of a liquefied natural gas industry in the province that will make meeting these targets more difficult if not impossible.

It’s time for B.C. to step up and shift the province’s emissions trajectory in the right direction. Clark’s government can shed its “climate laggard” status by increasing the level of ambition for the forthcoming Climate Leadership Plan, due to be finalized later this spring.

Here are four ways the government could make good on the promise of the Paris Agreement and Vancouver Declaration, and deliver the courageous Climate Leadership Plan we need. (For more details, see the Pembina Institute’s submission on the plan.)

Implement all of the Climate Leadership Team’s recommendations

In May 2015, Clark set up the Climate Leadership Team, made up of experts from the business, academic, and environmental communities, and representatives from the B.C. government, First Nations, and local governments. The province released the team’s report in November.

The 32 recommendations of the Climate Leadership Team collectively represent the baseline for an acceptable plan to get B.C. on track to meeting its 2050 targets. In fact, to date they represent the only plan B.C. has to achieve that goal.

They include positive steps such as increasing the carbon tax by $10 per year starting in 2018 (with targeted support for emissions intensive, trade exposed sectors as well as low income, northern, and rural residents), reducing methane emissions from the natural gas sector, powering the electricity grid with 100% renewable energy, setting greener building standards, and transitioning to zero-emission vehicles.

On February 29, Environment Minister Mary Polak made a key observation in the legislature. “I’m not aware of any modelling with respect to reducing GHG emissions that would show a pathway to getting to 2050 targets, such as the ones that we’ve signed on to, without having an increasing carbon price, be that cap-and-trade or carbon tax,” Polak said during a debate.

Act quickly to broaden the carbon tax to cover all emissions

While the Climate Leadership Team recommends broadening the carbon tax to include all accurately measurable carbon emissions in 2021, this can be done earlier.

That’s because the reporting infrastructure for these sources is largely already in place. It’s worth noting that the cost of abatement is low for sources of non-combustion emissions.

Rethink the development of an LNG industry

B.C. should not proceed with the development of an LNG industry unless the government can demonstrate a credible path to meet the Climate Leadership Team’s recommended 2030 target and the province’s legislated 2050 target.

Contrary to claims by the B.C. government and project proponents, LNG is not a climate solution because of inadequate policies in B.C. and importing jurisdictions to prioritize renewable energy, energy efficiency, and methane reductions.

One project, Pacific NorthWest LNG near Prince Rupert, could account for 75-108 per cent of the emissions allowed under B.C.’s 2050 target. Clearly, LNG and associated upstream gas development risks making the province’s — and Canada’s — climate targets impossible to attain.

The government can address this issue by undertaking an objective, fact-based and statistically valid analysis of methane emissions from B.C.’s natural gas sector.

Time for action is now

Realizing a Climate Leadership Plan that lives up to its name will require input from businesses, organizations, local governments, and people like you. The deadline for public input is Friday, March 25 at noon.

So please take a moment to tell the government that you want to see a courageous plan that incorporates and goes beyond the Climate Leadership Team’s package of recommendations, and commits to strengthening the carbon tax and reclaiming “climate leader” status for B.C.

Stephen Hui is the communications lead for British Columbia at the Pembina Institute, a non-profit think-tank that advocates for strong, effective policies to support Canada’s clean-energy transition. Follow him on Twitter: @StephenHui.