US president will leave his successor with a low-carb present: A roadmap to slash US emissions 80% on 1990 levels by 2050 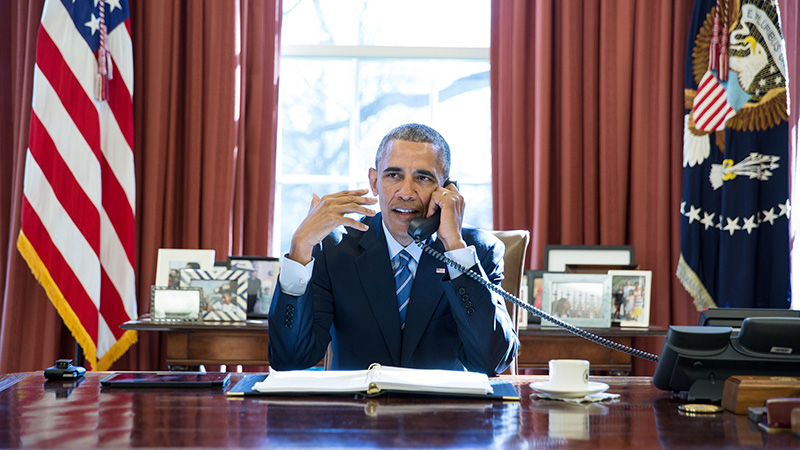 Buried away in the newly inked US-Canada climate deal there’s a line that may be President Barack Obama’s most enduring low carbon legacy.

It’s where the White House and Canadian PM Justin Trudeau agree to deliver long term low emission greenhouse gas development strategies by the end of 2016, and to encourage the G20 to follow.

The US document could be ready for publication by November’s UN climate summit; and it will become a guide for measuring US carbon cuts over the decades to come.

“We want to show development of those plans is possible,” said Dan Utech, deputy assistant to the president for energy and climate change.

The White House could have passed this onto the next administration, but “Obama obviously wants to do that before leaving office,” said veteran US climate policy analyst Alden Meyer.

“It’s easy to do the modelling but the key piece is exploring what the investment decisions are,” said Jake Schmidt, head of international climate policy for the NDRC green group.

Last December’s Paris summit saw 195 countries agree to limit warming to below 2C, and ideally 1.5C. To fit that trajectory the US will need to radically up its game over the coming decades.

We already have a sense of what the US plan could say, thanks to the Deep Decarbonization Pathways Project (DDPP), which released a new report in November 2015.

Sixteen research teams from countries covering 75% of greenhouse gas emissions collaborated in a modelling exercise to work out how the world’s top polluters could radically cut pollution by 2050.

Specifically, for the world’s second largest carbon polluter, the goal is cutting net greenhouse gas emissions 80% below the 1990 levels by mid-century.

-Deep decarbonization will profoundly transform the physical energy system of the US, with fossil fuel use decreasing by two-thirds from today while decarbonized energy supplies expand by a factor of five.

-US energy costs actually decrease as a share of GDP over time, from about 7% today to about 6% in 2050. While the overall impact on energy costs is modest, the transition to deep decarbonization nonetheless offers significant benefits for the U.S. macro-economy, such as insulation from oil price shocks.

Other significant conclusions were that the net change in consumer energy costs would likely be low, demand for energy would continue to rise and existing or near-commercial technologies would be sufficient.

But we are talking of a profound shift.

The amount of energy used to produce a unit of GDP in the US needs to fall 70% by 2050; electricity needs to be completely decarbonised. Per capita emissions need to drop 5.5% a year.

And the report came with a warning. Government needs to think radical, not always an approach associated with US energy policy.

“Policies that produce incremental changes without facilitating transformation can lead to technology lock-in and emissions reduction dead ends,” it said.

That means not relying on gas to meet carbon goals while ignoring nuclear and renewables, or focusing on the potential of ethanol to replace petrol but not investing in car battery development.

The US commitment to Mission Innovation – a 2015 pledge to double green research and development is one example of the policies needed to unleash a wave of green energy.

But a deeper approach means sectors need to advance together, rather than working on technology in silos, as evidenced by research into emission intensity of electric vehices (EVs).

Plans to develop regulations to slash methane emissions from oil and gas wells are a more immediate sign of Obama’s desire to leave office with tougher climate laws in place.

Oil and gas lobby groups north and south of the border are already groaning at a goal to slash the potent warming gas 40-45% on 2012 levels by 2025.

A crackdown on gas flaring, HFCs and aligning emission standards on heavy-duty vehicles after 2018 are other notable policies outlined.

Politically, the US-Canada alliance looks astute. Should a Republican win the White House, they will have to think carefully about Ottawa relations before dumping climate policy for 4 years.

“If a new US president went rogue on the issue, it would have implications for relationships with key partners around the world, including Canada,” said Meyer. “[Today’s deal] is a good basis for a strong relationship in this area, but there are no guarantees.”

And it’s unlikely to be Obama’s last play as he prepares to leave office.

Domestically, the battle over the Clean Power Plan will rage. Internationally, he’s set to push a hawkish climate stance, said his advisor John Morton in a press call.

“I can tell you we are working actively on ensuring that in final year of the administration we see continued progress bilaterally and multilaterally,” he said.

Obama travels to Vietnam in May, followed by Japan for the G7 the same month. In September he’ll be in Laos and China for the G20, while there’s also a visit to Buenos Aires planned.

There will be a science ministerial of Arctic nations in the Autumn, which includes Russia, China and Norway. Notably, the two leaders agreed: “If oil and gas development and exploration proceeds, activities must align with science-based standards.”

According to Schmidt, there’s also talk of a trilateral climate deal between the US, Canada and Mexico – perhaps focused on integrating clean energy markets.

He expects Obama to push climate hard on his final “victory lap” of engagements before he has to relinquish Air Force One. There may yet be more to come.

Read more on: US | Canada | Decarbonisation US