A revised ‘clean’ text resolves some issues, but divisions over differentiation and finance remain ahead of 8pm meeting 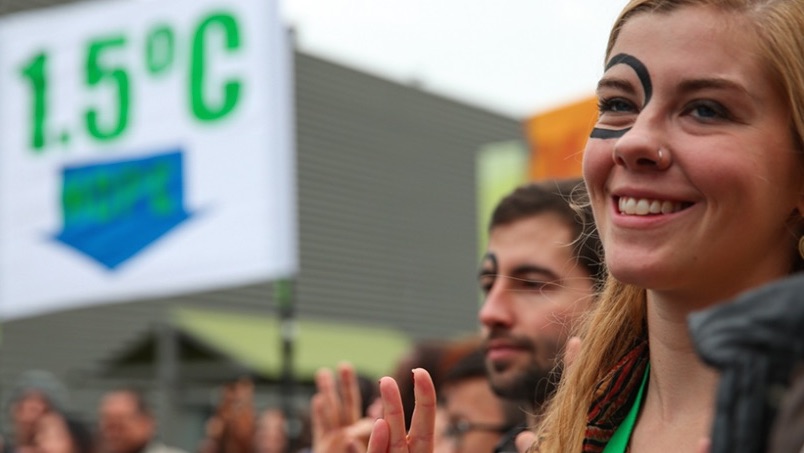 Campaigners call for a 1.5C warming limit (credit: IISD/Kiara Worth)

A new ‘clean’ version of a UN climate agreement has met with mixed reviews at talks in Paris.

The 29-page draft, compiled overnight by the French presidency of the talks, is 14 pages shorter than a previous iteration.

Ministers now have a vastly reduced number of options to choose from and will openly discuss their views tonight from 8pm.

Veteran observers expect the session to be lively and run late as they get stuck into politically volatile issues around finance and fairness.

President of the COP Laurent Fabius assured delegates it was not the final version: “The focus is now on open questions that still need to be settled at a political level,” he said.

The mood was far more positive than the last time countries tried to strike a deal, at the Copenhagen summit in 2009, according to veterans.

“At this stage in Copenhagen we had stopped talking. The process had pretty much broken down,” said Michael Jacobs, advisor to the New Climate Economy think tank.

By contrast, last night there was a “slightly embarrassing love-in” as everybody praised the French presidency for the way it handled the process, he added.

That doesn’t mean the deal is done – far from it.

Some of the less contentious elements have been more or less resolved, including how to treat adaptation to climate impacts and support poor countries with technology and training.

There is also evident progress on periodic reviews of national contributions towards the global effort. The first stocktake is scheduled for 2018/19, to be repeated every five years.

But with less than two days until a deal is due to be signed off, the division of responsibility between rich and poor countries is still an open question.

Linked to that, there is no consensus on finance flows or indeed the target for limiting temperature rise – major battlegrounds at the talks.

Monica Araya, former Costa Rica negotiator and advisor to the Climate Vulnerable Forum, welcomed the fact that a 1.5C warming threshold was still in play.

“1.5C is alive and kicking and that is good news, because that was not the scenario many months ago,” she told journalists. “That shows you something is shifting in the talks.”

Backed by more than 100 countries, “1.5 to stay alive” has become a rallying cry for campaigners in Paris. Major economies have including Canada, Germany and Australia voiced solidarity with those on the frontlines of climate impacts.

As a relatively recent development in the talks, however, it is not backed by the same depth of analysis as the previous 2C goal. Sticking with that is also an option.

“I have my baby here in Paris and by the time she is my age, there will be no more fossil fuels,” she said. “Let’s hope governments have the courage to spell that out… and face the reality of these temperature goals.”

Neil Thorns, director of advocacy at Catholic aid agency CAFOD, agreed. “There’s a serious game of smoke and mirrors being played here in Paris,” he said in a statement.

“A temperature limit of 1.5C is being put on the table, but it doesn’t mean anything until we get a clear plan on how the world would achieve it.”

Comment: Paris climate deal must not leave vulnerable to foot the bill

For many, action on climate change hinges on cash support.

Adriano Campolina, head of ActionAid International said the proposed deal leaves “developing nations hanging” as it does not include enough provision on finance.

Of particular importance to the least developed countries is money for initiatives like flood defences and drought-resistant seeds, to prepare for impacts that are already biting.

“Adaptation hangs on a thread but there is recognition of the need for grants and innovative sourcing to help meet climate funding needs,” said Oxfam executive director Helen Szoke. “There is still a long way to go: this is crunch time.”

And talks appear to have stalled on the issue of irreversible “loss and damage”, such as Pacific islanders losing their homes to rising seas.

Running through the text are references to what is expected from rich and poor countries. This is particularly controversial when it comes to carbon cuts and providing finance.

One option is always a binary division between those classed as developed in 1992 and the rest. Promoted by the likes of India, it holds the first group responsible, as big historic emitters, for everything.

That is not going to fly, said Greenpeace advisor Ruth Davis: “I would not in any way expect to see a bifurcated outcome.”

Other forms of words acknowledge the growing share of emissions and wealth accruing to China and other emerging economies.

It would be “bizarre” if the final version didn’t reflect the different development stages of countries in some nuanced way, Davis added.

Ministers from Brazil and Singapore have been tasked with leading side discussions on the question of a fair split of efforts. Reporting back to the main session on Tuesday night, they said “fault lines remain” and countries were not ready to put their final negotiating positions on the table. Those are likely to emerge in the coming hours.

“The next 24 hours are critical. This is where the real negotiations will begin,” said Christian Aid senior policy advisor Mohamed Adow.