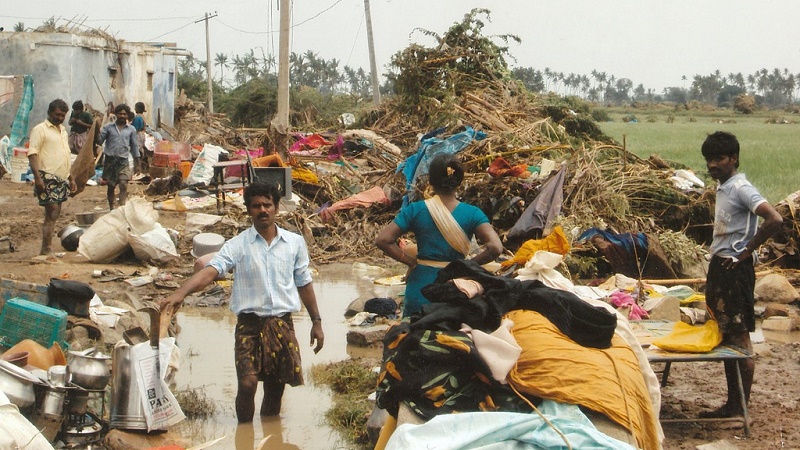 The aftermath of flooding in Andhra Pradesh, India (Flickr/Heather Cowper)

Collaboration and solidarity are important tenets of international cooperation. They become even more critical in a globalised world where the major challenges are intertwined and global in nature:  financial meltdown, food crises, conflict or climate change.

As I’ve argued in another blog, all crises share the same “genetic code” of inequality. Most of these crises cannot be solved without fixing culpability of those who cause them.

North-south cooperation rather than antagonism is indeed the solution, as Monica Araya argued in a recent article for Climate Home. But ensuring cooperation means recognising that the playing field has been, and remains, grossly uneven.

Today’s climate crisis is a result of unrestrained industrialisation in the West over the last 150 years. Developed countries, which pumped over 70 percent of accumulated greenhouse gas emissions into the atmosphere, cannot wish away the principle of “common but differentiated responsibility, with respective capabilities,” enshrined in the UN Framework Convention on Climate Change.

Industrialisation has brought decades of wealth, including hospitals, schools, technology and a host of other advantages that citizens of rich countries benefit from.

Unfortunately, their benefit has come at a substantial price: developing countries are now bearing the brunt of climate impacts. Even as poorer countries try to improve the lot of their citizens, their development efforts are being constantly set back by hurricanes, droughts, floods and climate disasters.

Climate change hits poorer communities and countries hardest – not just because they’re less prepared, but also because the tropical areas of the globe will experience much more severe impacts. Climate change is outpacing economic development, exacerbating inequality between countries. We therefore need an ambitious climate deal in Paris this December.

The current draft agreement is just a shadow of what is needed. We need to make sure that solutions to climate change are fair and take into account this inequality between countries.

The recent Civil Society equity review of countries’ climate pledges, to which ActionAid contributed, presents a rigorous methodology for quantifying those differing responsibilities. The calculation of fair shares entails dividing the required climate action between all countries, according to their responsibility and capacity.

Responsibility is reflected by a nation’s contribution to climate change and is represented by its cumulative greenhouse gas emissions from a specified initial year. Capacity, on the other hand, is defined by national income and national income distribution.

As a result, this approach offers a comprehensive vision for north-south cooperation based on fairness and equity. Only such a vision can truly begin to solve the daunting crisis we currently face.

It also shows that the current model, in which countries simply pledge what they feel is “realistic” for them to achieve, inevitably means that rich countries will simply get away with doing far less than they must – which they have already been doing for the last twenty years.

North-south cooperation begins with all countries recognising that they each have a role to play. So far, given the pledged climate action or the intended nationally determined contributions (INDCs) that 174 countries have prepared and submitted in advance of the Paris summit,  the wealthy countries of the north are failing to understand their required role.

In fact, developing countries have committed to do more than developed countries, even though they have contributed far less to the problem of climate change. The onus still lies on rich countries to shoulder their responsibilities. This is not about north-south antagonism; it is about a sober assessment of who is doing what and who needs to do more.

A just transition to a clean economy is an opportunity rather than a burden. However, a country like India – which has at least 300 million people with no access to modern energy – cannot simply make a sudden and rapid transition away from cheap, dirty coal to clean renewables without leaving a vast number of people quite literally in the dark.

India, which ranks at 135 out of 187 countries  in the Human Development Index, does not have access to the kind of finance and technology necessary to make such a transition, and must still overcome a massive development challenge. It certainly can – and, as we highlight in our report, must – take the first step towards that transition. But the bulk of the transition must be financed by international support.

India needs at least US$2.5 trillion to implement its ambitious climate change actions between now and 2030, which cannot come solely from domestic resources. This is true for India and it is certainly true for even poorer countries like Ethiopia, Senegal or Bangladesh.

Without adequate financial support from rich countries, most developing countries simply won’t be able to implement those commitments. This is why finance is such an integral part of climate action. Poor countries need energy for development, but don’t have the means to invest in renewables. Meanwhile, many are being wooed by private coal and oil companies.

Unless climate finance helps them to make greener choices – which even with falling prices require upfront capital investment in technology and infrastructure – many developing countries simply feel they have no option. Providing finance is a key obligation of rich countries.

The moral and legal responsibility of the north to act based on their fair shares cannot be papered over in the climate agreement at and beyond Paris. The world is watching.