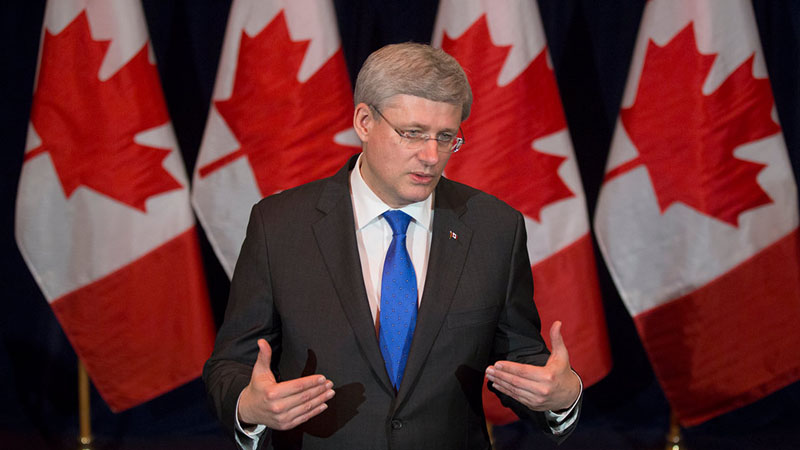 “The Harper decade ends with a tangled legacy and an abrasive style that alienated friend and foe,” wrote CBC News in its political obit of Canada’s now resigned prime minister (Flickr/ Stephen Harper)

The centrist challenger won a 14-seat parliamentary majority, taking 184 of Canada’s 338 districts and 39.5% of the vote, the elections body said.

It paves the way for a climate policy refit, 40 days before a decisive UN climate summit.

Under Harper, Canada junked its membership of the Kyoto Protocol, went all out on tar sands extraction, enfeebled environment agencies and muzzled climate scientists.

The Conservative leader meanwhile pledged to slash greenhouse gas emissions 30% by 2030 on 2005 levels, and backed a G7 commitment to decarbonise the global economy over the course of the century.

On the campaign trail, Trudeau refused to revise Canada’s pledge, which activists say is inadequate, before the Paris summit, but said he would talk with provinces within 90 days of the event.

The 43-year-old son of a former prime minister supports linking the country’s myriad carbon markets and has promised to ramp up green infrastructure worth C$20 billion (US$15.3 billion) over the next 10 years.

He has committed to fulfill a G20 pledge to phase out subsidies for the fossil fuel subsidies and appoint a chief science officer to “ensure that government science is fully available to the public, that scientists are able to speak freely about their work”. Harper had axed that position in 2008.

Trudeau is constrained by the federal system’s dispersal of power from Ottawa to provinces, however.

Others are reticent to herald major policy reversals given Canada’s reliance on oil production.

We’ve battled Harper for 4+ years on KXL. Trudeau ain’t all that, but my is it sweet to watch Harper fall with KXL still in limbo.

Tony Clarke at the Polaris Institute, an advocacy group, told Climate Home: “You could drive a truck through [the Liberal] platform. “They are playing the process card rather than being too specific on content so as not to get trapped.”

Green Party lawmaker, Elizabeth May offered her help on Paris. “I’m happy with the result… More important than Green seats is that we saw the end of the Harper era,” she told the Globe and Mail newspaper.

Others drew comparison to a fallen ally, Tony Abbott.

Wonderful news that Harper is out and Trudeau is in after Canada’s election. As with Australia’s ouster of Abbott, perhaps climate sanity. — Jeffrey D. Sachs (@JeffDSachs) October 20, 2015