George Marshall: We need to engage the Tories on climate change

Green groups must stop ignoring the elephant in the room: a huge mass of centre right voters who hold power of change 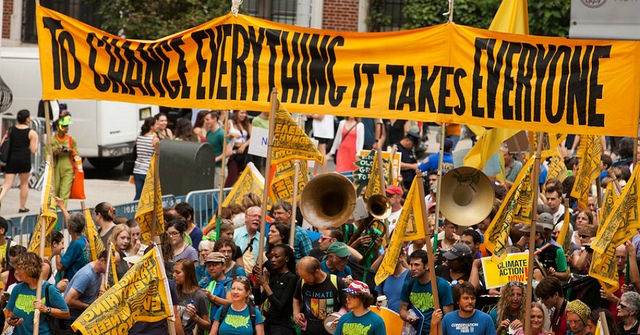 I regard myself to be a radical.

However, I now believe that the most radical thing that I can do is to break out of the safety zone of left/liberal environmentalism and actively engage with conservatives.

I have two decades in the radical environmental movement, and I believe strongly that the crisis of climate change requires systemic changes. I make no apology for this and am utterly convinced, from my reading of history, that these changes will only emerge from strong and outspoken political movements.

But no movement will win unless it has strength of numbers and influence. We should not delude ourselves that a highly motivated minority – what Marxists used to call the vanguard– can ever win this. This issue is far too large to be overcome without a near total commitment across society.

Yet, throughout the Anglophone world  there is a dangerous political polarisation around climate change.

In one particularly disturbing US poll, attitudes to climate change were a better predictor of respondents’ political orientation than any other issue- including gun control, abortion and capital punishment.

Denial of climate change is not just an opinion, it has become a dominant mark of people’s political identity.

Blog: Seven ways to get the Tories to back ambitious climate policies

This is no small problem. People with conservative values (some of whom may also vote for centre-left parties) constitute the majority in almost all countries. In US surveys people who identify strongly with these values outnumber those who identify with liberal/left values by a factor of 2:1.

In my book, Don’t Even Think About It: Why Our Brains Are Wired to Ignore Climate Change, I argued that climate change exists for us in the form of socially constructed narratives built upon our values and identity.

It is these narratives- not the underlying science or even the evidence of our own eyes- that leads us to accept or reject the issue.

Unfortunately one of the dominant values in the climate movement is a disregard, if not outright contempt, for the right-leaning mainstream and their concerns. Activists often talk with disgust of the selfishness, greed and stupidity of conservatives.

This is intolerant and unpleasant. The denigration conveniently ignores the diversity of opinion and life experience among conservatives. A struggling rural family, an elderly Christian on a small pension, a community shopkeeper and a Wall Street Banker are combined into one faceless enemy.

More often, though, conservatives are just ignored. Few people in the climate movement want to deal with them, talk to them, or find out more about them. They simply don’t exist.

Last week I led a communications workshop for one of the largest international environmental networks: one I respect and have worked with for many years. I asked them “do you think that the climate change movement has a problem with its diversity?”

Absolutely, they replied, it’s too dominated by middle aged men, too white, too middle-class, not enough involvement from minorities or indigenous peoples, not many disabled people. Nobody mentioned the absence of conservatives, and certainly no-one in the room was admitting to being one.

Diversity’ is a powerful frame for progressives but its components have been entirely defined by the struggles of marginalised groups for representation. It makes us blind to our own failure to involve the majority of our fellow citizens.

Last year I was thrilled to attend the People’s Climate March in New York (I think I can justify the carbon-I was there on a six -state book tour). 350,000 people marched with placards declaring “To Change Everything We Need Everyone“.

But, just as diversity only includes the groups that conform to the progressive ideology, the definition of everyone excludes the majority of the population.

There was a great deal of progressive diversity at the march: indigenous peoples headed it up, followed by environmental justice groups of all colours and ethnicities and labour unions.

As someone who has campaigned for over twenty years for indigenous rights, and led large programmes with trades unions, I was thrilled to see such broad representation.

But as I watched the banners and placards pass by, I imagined how this would seem to mainstream America. The dominant messages were about banning, stopping, protecting, boycotting things.

Among them were hard left-wing messages about overthrowing capitalism and destroying Wall Street.

A woman with a placard reading Never, Never, Never, Ever Vote Republican (see above) was clapped and whistled. To balance this a posse of cigar-chomping Republican frat boys turned up with cut outs of Ronald Regan to wind up the lefties.

But there was nothing, not even a word that so much as hinted that mainstream conservatives had a place alongside everyone in the climate struggle.

A small pack of Nebraskan ranchers, converted to the cause by their fight against the Keystone XL Pipeline, told me freely, proudly, that they were lifelong Republicans.

They were hidden within the mass of the march when they should have been at its very front: a symbol of an extraordinary unity of purpose and our shared destiny.

Ironically we know how to change this. The process to increase representation of conservatives in the climate change movement can be taken directly from previous experience with building diversity- whether it be economic, gender, or race. First of all actively hire new people from the underrepresented group who can work through their networks.

Then enable them to develop communications that speak to others like themselves using their own values.

The process by which we respond to climate change creates the tramlines for our future adaptation.

If we use it to build a narrative around our interconnectedness and shared humanity then we stand a good chance of pulling through, just as divided communities can settle their differences to pull together after a hurricane.

If we build our movement through distrust and division we create the preconditions for future in-fighting, blame and scapegoating. The only reason why the minority vanguards ever won was that they got their hands on guns and then ruled by them.

So my challenge to all people concerned about climate change is this: when are we going to accept the challenge of reaching across partisan boundaries and building a broad social consensus for action?

We do not even have to agree about the details of the solutions- indeed I hope we maintain a strong debate.

But surely we can come together in the recognition that dealing with climate change is the greatest calling of our age?

George Marshall is the founder if the Climate Outreach Information Network (COIN). This article first appeared on his blog Climate Denial. Follow him on twitter @climategeorge