Moves are afoot to lower expectations ahead of upcoming Paris deal, with long term costs for the planet 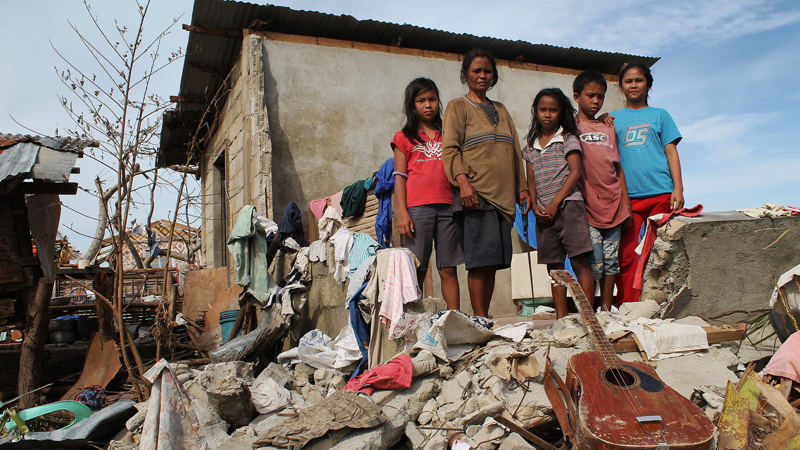 Corazon dela Cruz and her four children in the wreckage of their home destroyed by Typhoon Haiyan
(Pic: Pio Arce/Genesis Photos – World Vision)

You can already hear the sounds of the goalposts shifting.

As the 21st conference of parties (COP21) of the United Nations Framework Convention on Climate Change (UNFCCC) looms, some countries and groups are managing expectations.

Levels of ambition, funding and the temperature target are all being questioned.

There’s a reason for this. Many blame heightened expectations for the collapse of the 2009 UN climate summit in Copenhagen, the previous attempt to reach an ambitious global agreement.

Hence, there is an attempt being made to lower expectations for COP21 so that the outcome can be couched as a success even if it fails to achieve an ambitious and legally binding agreement.

This is clearly happening with regard to the 2C temperature target.

The globally agreed target of warming of 2C above pre industrial levels represents the threshold of globally dangerous temperature rise which must be avoided.

An alliance of vulnerable developing countries including the Least Developed Countries, Small Island Developing States, and the Africa group have argued for the target to be made 1.5C.

The UNFCCC has a review of the temperature target ongoing.

There are arguments now being made by some that the 2 Degree target is “unrealistic” and should be dropped.

This argument based on perception of political situations in developed countries where there is a reluctance by some groups of vested interests, primarily the fossil fuel industry and their lobbyists and paid politicians , to take the decisions and implement the actions that are needed.

What these “political realists” fail to realise is that there is another, “realism of physics” that trumps their political realism where an increase in global temperatures above 2C will condemn many millions of poor people in the developing world.

The rich won’t escape the consequences. Its children will face the costs of which will be many multiples of the costs of taking action now.

There are limits of applying a cost benefit analysis to the problem of taking action to tackle climate change: the costs of inaction are borne by others (namely the poor and future generations) while the benefits of inaction are accrued to the rich polluters of today.

Analysis: Is development the best kind of climate adaptation?

Hence why should the polluters pay for action to stop polluting when they will not benefit from those investments in pollution control (as one polluter has been known to say: “what have future generations ever done for me?”).

Thus there is really no incentive for polluters to stop polluting, other than regulation.

Even with regard to the 2C temperature target there is a real price to be paid by some poor people who will die and some threatened ecosystems which will inevitably disappear at 2C which would be saved if the temperature target was made 1C.

In other words, the difference between a 2C target and a 1.5C target is in the order or several tens if not hundreds of millions of people in poor counties losing lives and livelihoods and some key ecosystems, including coral reefs, being irreparably damaged or even lost.

Hence even a decision to stick with the 2C global target is to agree to condemn millions of our fellow citizens on the planet to possible loss of lives and some critical ecosystems being lost.

The LDC group, the AOSIS group and the Africa group all strongly urge that the global target be changed from 2C to 1.5C and argue that it is both economically and technologically feasible to achieve but the deficit lies in the lack of political will to act by the polluters.

The report released on Friday by the Climate Vulnerable Forum (CVF) under the leadership of the Philippines, reiterates this point.

Therefore the leaders meeting in Paris in December must be aware of the consequences a decision to stick to the 2C target is a deliberate decision to condemn millions of their fellow citizens of planet Earth to misery and possible death.