Is development the best kind of climate adaptation? 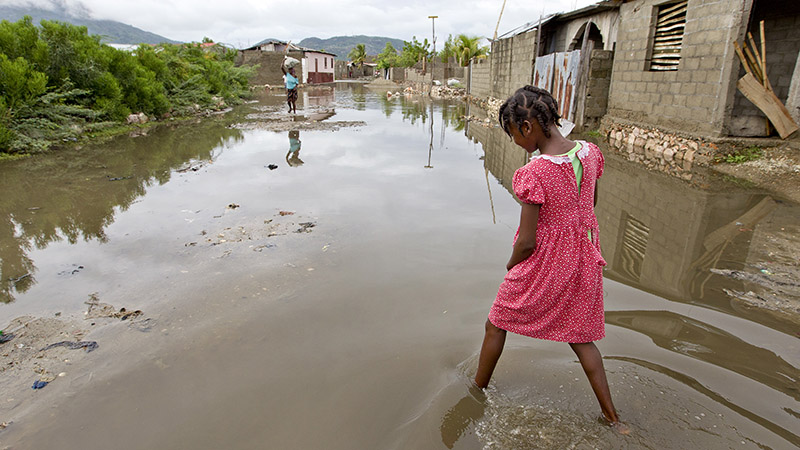 A girl walks throught the flooded streets of her neighbourhood in Haiti’s northern city of Cap Haitian (Pic: UN Photos)

For people living in poor countries, climate change is expected to worsen problems they already face from events like droughts and floods.

The best way of addressing this, according to many experts, is to improve the economic and social development of poor people facing climate change.

It is suggested that, with increased resources, information and better infrastructure they will be better able to cope with extreme weather events.

Some even argue that efforts to stop new investments in coal – cheap, abundant but the leading contributor to global greenhouse gas rises – could hinder progress in developing countries.

So is it a mistake to focus attention on adapting to future changes in the climate, when the priority should be development?

The responses from experts at a conference on climate adaptation organised by the research organisation IIED are mixed.

The world’s major donors provided US$135 billion in official development aid in 2014, a figure that has been rising steadily over the last 15 years.

The Climate Policy Initiative calculated that US$25 billion is spent each year on helping people adapt to threats from climate change.

Poor countries, which receive around half of development aid, are often the most vulnerable to climate change.

Many of these countries are likely to be among the most affected by changes in temperature and rainfall, and are often dependent on agriculture, which is particularly influenced by changes in the climate.

In this context, some experts suggest that the best way of reducing risks from climate change is to promote development for people living in poor countries.

Anderson says, at the moment, “adaptation and development are closely linked”.

The priority, he argues, should be to maintain the current focus on reducing poverty as a way of building poor people’s ability to cope with future changes to the climate.

Anderson points to projects in Ethiopia that were aimed at improving people’s food security, which, he says, have now made them better adapted to climate change.

“There was massive investment in improving terraces and digging wells: the intent was food security and it has improved livelihoods”, he says.

At least in the short term, he says, “dealing with development deficits may be enough in many cases to overcome climate risks”.

In his view, climate adaptation might, over the next few years, involve doing some things that are not responses to changes in the climate and would have been desirable even without climate change.

The suggestion that, in the short term, climate adaptation can sometimes be achieved through development, raises questions about distinctions in international aid between funding for adaptation and other development aid.

The Green Climate Fund aims to channel US$100 billion a year by 2020 to developing countries, of which half will fund climate adaptation.

Some pledges to the Fund, such as that by the UK, have come out of aid budgets, suggesting that some climate adaptation projects may use funding that would otherwise have been spent on development work unrelated to climate change.

However, others say they are seeing climate impacts now and so development projects are not necessarily appropriate means of adapting to climate change, even in the short term.

“In Peru, the glacier retreat is accelerating, there are problems with the water supply and hydro power, there are floods, and pests are moving up the hillsides”, Karen Price Rios, who works for the NGO CARE, tells RTCC.

Price Rios says these changes are already forcing communities to seek help that would not have been necessary without climate change.

“We’re doing a different kind of development project now – the priority for many communities in risk zones is for early-warning systems”, she said.

But she adds that communities often also ask for support with projects that she says would be beneficial even in the absence of climate change: “Women in particular want help with alternative businesses like handicrafts”.

Anderson and Price Rios agree that, in the long term, climate change will need to be central to development.

“We need climate-resilient development now, but in the future, we will need specific adaptation projects that contribute to development”, said Anderson.

According to Anderson, the priority for both development and adaptation projects should be to avoid what he calls “climate-induced poverty tipping points”, where climate change undoes the gains that have been made in lifting people out of poverty.

“The most vulnerable people now are an analogue for where more people will be later along” as a result of climate change, he says.

Anderson argues that these long-term risks require a different approach, which he terms “radical adaptation – climate adaptation that is far-reaching and far-sighted”.

The purpose of this approach, Anderson says, should be to “get everybody ahead of the climate effects curve”, so they are better able to survive future climate-related events when they strike.

He says that “radical adaptation” should use existing large-scale tools, like social protection programmes currently used Pakistan, Kenya and Ethiopia, to pre-emptively identify and reduce the impact of future climate pressures that could push people into poverty.

This approach combines a short-term focus on development to reduce poverty with a long-term emphasis on adapting to the threats posed by climate change.

Anderson acknowledges that there can be tension between these short- and long-term approaches.

He returns to the example of the projects in Ethiopia, where he says economic development increased the local demand for water, which was also coming under growing pressure from climate change.

In cases like these, he says studies are needed to understand where short-term development may conflict with long-term climate pressures.

However, he says that when these conflicts are identified, they can be addressed with technologies like those that improve rainwater harvesting.

She notes that such information is becoming increasingly, although adds “we are all still learning about it”.