Students at the Blavatnik School of Government, Oxford University, role-play the Paris talks. Can they strike a deal? 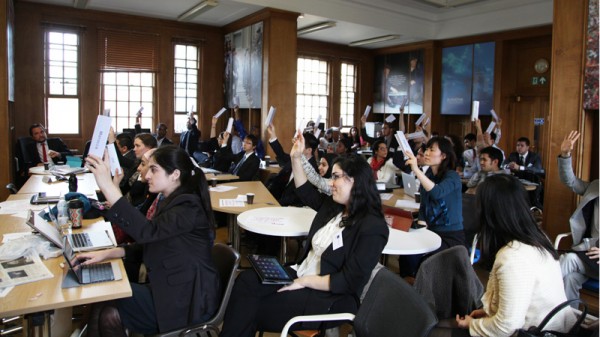 Green groups have teamed up with oil companies and oil-rich states to demand the phase-out of coal worldwide, in an unprecedented partnership.

They urged negotiators to back a “Cut Coal Clause” in the historic climate deal to be struck in Paris this year.

No, eco-campaigners have not sold out to big oil. This logical – if fragile – coalition to eliminate the most polluting fossil fuel is happening at a mock UN summit, with the parts played by students.

Specifically, masters students at the Blavatnik School of Government, Oxford University, are acting out this December’s critical climate talks.

This is no casual role play. The 76 students, hailing from every corner of the globe, are destined for high-flying careers in public service.

They have been briefed by acting and former lead negotiators from the UK, Mexico and Bangladesh. The debrief will come from Sir David King, UK special envoy on climate change. 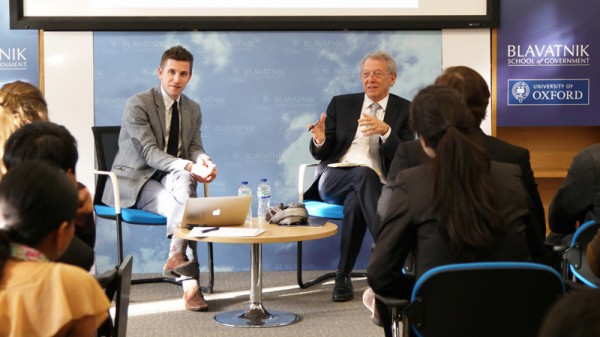 In a session on adaptation to the impacts of climate change, the delegate for Maldives knows her script well.

It is early in the two-day simulation and the students are still feeling their way through the unfamiliar concepts of climate change.

There are diversions into mitigation (cutting greenhouse gas emissions), finance and the role of cities before the co-chairs (both female – unlike in the real UN talks, the gender balance in this class is 50:50) get things back on track.

At the back of the room, a delegate flicks through Facebook on his phone, perhaps posting in the group set up for the mock UN talks: a mix of relevant articles, campaigning messages and in-jokes.

As any veteran of international negotiations knows, coping with tedium is a core skill, with hours of grandstanding, jargon and procedural squabbling for every moment of real progress.

Analysis: From Kalimantan to Lima, where do women stand in climate?

In the coffee break, the students are ready with their personal opinions.

Kazakh student Galymzhan Suleimenov is exercised about the suggestion that gender be included in the climate deal. What has gender got to do with climate change?

It is a rhetorical question: he launches into his next topic – how national governments should be held accountable – without pausing for breath.

Bushra Al-Maskari watches with amusement, points RTCC towards the coffee machine and waits to be asked a question.

For her, the exercise is revealing how many different interests are at play in international talks.

Coming from Oman, she sympathises with the developing country players. “When a country seems not to be cooperating, there is always something behind it,” she observes.

Ade Adenle is playing the politically neutral Intergovernmental Panel on Climate Change, but his comments reflect his Nigerian roots and experience of attending the 2011 Durban climate talks.

“Are they going to be able to convince developed countries to deliver? You have to speak with a common voice.”

Back in the negotiating chamber, Anika Gray is still in character. As oil major Exxon Mobil, she is a trying to get more supporters for the anti-coal campaign.

Is she also fighting any talk of phasing out oil and gas? “Of course,” she answers with a sly grin.

Gray “would love to be a negotiator”. Her interests lie more in health than climate change, although she notes the subjects are linked.

Yannick Spencer, representing the French presidency of the talks, rounds people up for the next session before finding a side room for a quiet interview.

After three years at consultancy McKinsey, “helping rich companies to get richer”, this course is his route to a more socially rewarding career. Ultimately, he aims to go into politics back home in Australia.

Climate policy runs in the family. His brother, Thomas Spencer, directs the climate programme at IDDRI, a Paris-based think-tank.

Yannick says he was told to “figure it out on your own” when it came to this particular assignment.

But he talks authoritatively about everything from the role of the presidency to the dynamics of climate denial. 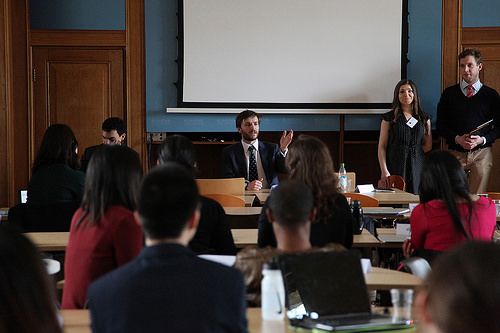 “The chair is in a position where they do not actually have that much power, because you have to be impartial,” he says.

“If you manipulate the agenda in a way people think suits your own interests, you set the whole thing back.

“It is both a powerful and a weak position. I think past negotiations in the EU have failed because of an overly activist and ambitious chair, so I am trying to be hands-off.”

On the chances of success in Paris, Spencer precisely echoes the line from EU negotiators.

He is “relatively confident” Paris will get a deal, although it is “inevitable” it will not go as far as the science demands.

“Whether it is a good outcome will depend on whether or not it is recognised that it is not as good as it should be and whether there is a mechanism to ratchet it up.”

But with an hour to go until the deadline, it becomes clear that the Blavatnik School has not cracked it. The students give up. There is no deal.

The delegates agreed on some points. They decided early on to scrap language that created a firewall between rich and poor countries: references to “Annex 1”.

This is a list dating back to 1992 of OECD and former Soviet countries, which has made them the only parties obliged to cut their greenhouse gas emissions.

With emerging economies like China responsible for substantial and increasing emissions, this is increasingly seen as unsustainable.

Yet developing countries are reluctant to let the richest nations off the hook, in the absence of an alternative way of splitting responsibility they see as fair.

In the role play, as in the real world, it was defining this alternative that proved to be the real challenge.

As Maya Tudor, one of the course leaders, explains, it is a valuable lesson on “critical junctures and path dependence”.

In other words, the historic moments that shape institutions and determine the course of discussions for decades – sometimes unhelpfully.

And the reason countries fight so fiercely over the issues is the huge economic interests at stake, whether oil wealth or heavy industry.

As well as countries, lobbyists and NGOs, the course leaders assigned one student the role of Senator Inhofe.

This snowball-throwing US lawmaker is a byword for a Congress hostile to the idea of a global climate deal.

“Reaching an international accord is a two-tier game,” says Tudor. “In the US, oil is maybe not as important as to the Venezuelan economy, just as important as a veto power is the character of Senator Inhofe…

“One of the most useful things to come out of this for the students was an overall sense of just how important the politics of special interests are.”

With less than nine months to go to Paris, it is a lesson that anyone hoping for a strong outcome cannot afford to ignore.