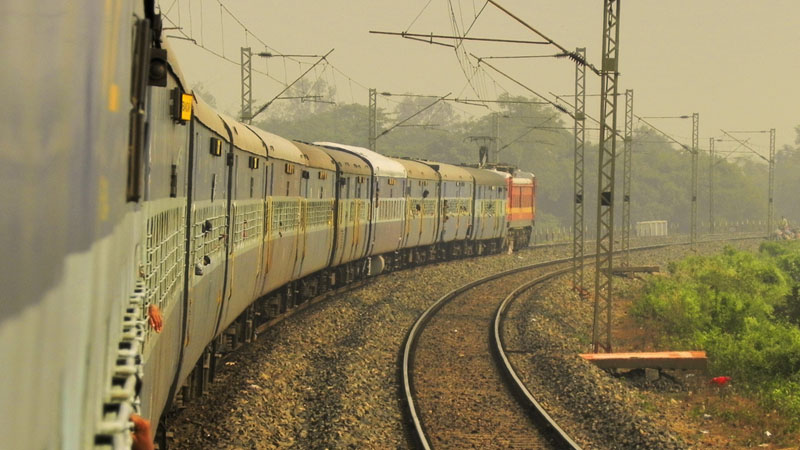 India’s rail network is a significant growth engine for the economy. But it’s not very green.

An estimated 60% of its 65,000 kilometres of railway tracks are still powered by diesel. This makes it India’s largest consumer of diesel at 2.6 billion litres last year.

It is also the largest consumer of electricity at 13.8 billion kWh and its energy consumption is rising by 5% every year.

Electric power in India is largely generated in thermal [coal, gas, nuclear] plants. When the cost of electricity rose by over 45% in the new decade, the government made a decision to source 5% of fuel for the railways from biodiesel.

However, the supply chain did not take off as the government had hoped. The electrification of tracks has also been slow because of the huge investment needed.

A solution that works is badly needed, and solar power could well be the answer.

Last month the Indian minister for railways, Suresh Prabhu, presented a well-balanced and realistic railway budget in the parliament.

His ministry aims to deploy one gigawatt of solar photo voltaic (PV) installations on railway properties across India through subsidies or what he termed ‘Viability Gap Funding’.

The first megawatt-scale solar PV installation on a railway platform shelter will be commissioned soon at Katra, in Jammu & Kashmir.

Sunil Reddy of Gansun Global solutions, who is setting up the Katra solar project, said that “even at a conservative estimate of 30% feasibility, the Indian Railways has a mammoth five Gigawatt solar PV potential on its platform shelters alone.”

Solar power, currently at INR 6–7 per kWh, is already cheaper than, or equivalent to, the cost of grid power in most parts of India.[2]

Even for the projects allocated under the second phase of the government mission, known as the Jawaharlal Nehru National Solar Mission, the cost hovered at about INR 6 per kWh.

This trend heralds very good news. It translates into a huge potential for direct financial savings on sectors with electrified tracks.

So much so, that the viability gap funding with which government intends to support these projects might not be needed at all.

Solar power is best utilised when it is generated at the point of consumption, so that transmission and distribution losses are minimal.

Rooftops are also often located on leased premises where infrastructure investments are risky.

Their consumption points such as trains, stations and other infrastructure are also close at hand.

Excess power can easily be fed into the traction power grid. The logistical hurdles that arise in regular commercial buildings, thus, cease to exist.

Deploying rooftop Solar PV on Indian railway stations will save money and create thousands of jobs. It will also help in climate change mitigation by avoiding millions of tons of carbon emissions.

Switching to solar power can save valuable millions of dollars of foreign exchange reserves, by avoiding diesel imports.

Scaling up its supply will result in economies of scale, and reduce transaction costs. Savings can be used for electrification of new tracks.

The benefits of these savings will trickle down to the millions of people who are dependent on railways.

An interesting phenomenon in the Indian energy field is that a number of oil and oil marketing companies are looking at off-grid renewable energy projects through a consortium led by the ministries of renewable energy and petroleum and natural gas.

They are probably aware that as more and more tracks get electrified, they will lose their largest customer.

On the other hand, equity requirements for the proposed one Gigawatt of solar PV installations on railway properties will be INR 2,000 crores – 10% of what the oil companies intend to spend on expansion this year.

Hence there is a strong case for these oil companies to enter the market and do more solar projects for the railways.

If India can access cheap developmental financing for these projects – an idea that the government should explore – then the market can expand in leaps and bounds.

The total solar PV installations in India are only about 2.5 Gigawatts. The new government in India is targeting 100 gigawatts of solar power by 2020 and 60 Gigawatts of wind power by 2022, across sectors.

This is a big and bold step in the right direction that has already been hailed positively by environmentalists around the world.

Given this excellent policy environment, the time has come for the Indian Railways to seize the day, and scale up its investment in solar power.

Ashok Thanikonda is an associate at the World Resources Institute in India, a research organisation with experts and staff who work closely with leaders to sustain a healthy environment. Follow him on Twitter @Thanikonda