Latin American cities are choking to death, that US-China pact didn’t solve everything and other nuggets from COP20 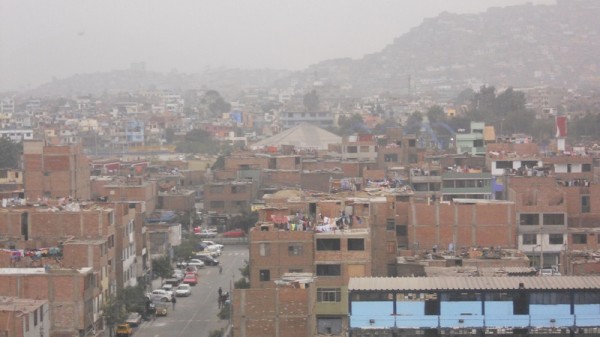 Lima smog: public transport is not just better for the climate, it makes cities more pleasant to live in
(Pic: Flickr/The Advocacy Project)

I could taste the air in Lima most mornings. Gritty, grimy with an aroma of petrol, at times I felt I was wading through pollution on my way to the morning bus.

The city has a new Bus Rapid Transit (BRT) and a metro link, but they are woefully inadequate for a city with an estimated 8.5 million inhabitants. As a result everyone drives, resulting in gridlock and unimaginable levels of air pollution – rated the worst in Latin America by the World Health Organisation earlier this year.

It was a daily reminder than phasing out fossil fuels and investing in better public transport are not just policies to tackle climate change, but also to allow us all to live more pleasant lives.

Which fool said the debate over differentiation between developed and developing countries was over?

In Lima the spectre of Copenhagen and other ancient fights haunted the negotiating chambers. It led to one fiery speech by a Malaysian delegate, raging against the colonialism of western nations and their refusal to offer compensation for years of exploitation.

But look beyond the rhetoric and there was a critical difference. It’s now accepted that the binary divide between the two sides no longer exists. Instead there’s something more subtle – best illustrated by Brazil’s proposal of three concentric circles, with the developed at the centre and the poorest on the outside. The middle piece is filling up as nations develop – that makes the balance of commitments for the Paris deal look far more interesting.

3. The Green Climate Fund is not an answer on its own

Hailed as the panacea for years of slow financial flows, the GCF and its contributors let everyone know just how important it could be in the run up to Lima.

And you can understand why poorer countries feel so aggrieved and suspicious that the $100bn a year by 2020 they were promised won’t turn up.

The GCF has a huge opportunity if it can leverage private sector capital – it has about 6 months to get its act together. The UN process needs to to deliver.

For all the talk of transparency, the Lima Climate Action Plan was developed on the back of a number of private meetings between the Peruvian presidency and major parties such as the US, EU, China and India.

The idea that 195 countries can run through a proposed 2015 Paris climate deal line-by-line and agree on a plan to move forward seems ludicrous, when you see the problems they faced when attempting a similar task on a far smaller document in Lima.

That’s not to say that the first round of negotiations in Geneva next February won’t be critical. But the real players next year will be the French, and their ability to gain the trust of parties by December.

If agreement is reached in Paris it’s likely to come from a similar set of backroom manouevres.

5. The US-China pact didn’t solve everything

Talk that a new rapprochement between Washington and Beijing could change the UN talks was overstated. While their respective climate ministers are friendly on a bilateral basis, the multilateral arena carries baggage – decades of mistrust and ancient divides.

This was illustrated on Saturday morning when China once again reaffirmed its backing for separating the roles of developed and developing countries in the context of a Paris agreement.

On the flip side, China’s decision to adopt climate targets makes it far harder for leading emerging economies like Brazil, Russia and South Africa to argue that they should be exempt. And now the US has revealed its targets, other developed nations like Australia, Canada and Japan have no cover. 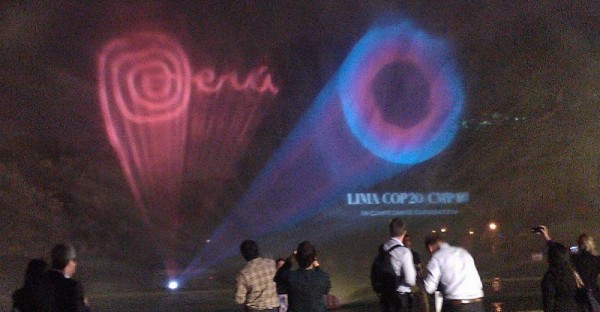 6. If you want to be depressed, speak to negotiators; for optimism, try business

On Friday, I spoke to sustainability executives from Philips and BT, together with the World Bank’s climate envoy Rachel Kyte. All exuded positivity, stressing what they said was a strong and persuasive case for investment in energy efficiency and green technologies.

The World Bank’s Rachel Kyte spoke of her confidence in a  new coalition of “progressive business, indigenous leaders and civil society” pushing for carbon pricing and more investment in the green economy.

It’s a mood the hosts of next year’s Paris climate summit are desperate to capture. “People want to have an agreement, urgent and ambitious. It’s not lip service, it’s real,” said France foreign minister Laurent Fabius.

Deemed radical and impractical by fossil fuel producers, this suggested element of a 2015 global climate deal captured the imagination of observers in Lima.

Civil society groups have long relied on the 2C warming limit as a peg to place their warnings, but a decarbonisation goal is seen by some as offering a more positive narrative.

Added to that, it’s in keeping with the tougher climate mitigation trajectories of the Intergovernmental Panel on Climate Change, the world’s leading authority on global warming.

If adopted by countries it would place the business plans of Shell, Exxon and Chevron under immediate threat, forcing them to rapidly decarbonise, whether by investing heavily in carbon capture and storage or diversifying.

Veteran observers say it’s likely to be axed before a Paris deal is signed, but the fact discussions about the end of oil, gas and coal are now taking place at UN climate talks is new, and significant. 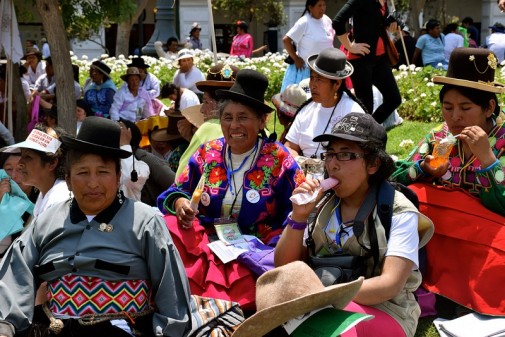 Indigenous people were well represented at a climate march in Lima on Wednesday
(Pic: 350/Jamie Henn)

In Peru we met the people who are dying in defence of their tradition homes. RTCC’s Megan Darby spoke to the widows of four men killed in Peru for standing up to developers – with illegal loggers suspected. Deforestation accounts for 40% of Peru’s greenhouse gas emissions, and of that, the World Bank estimates 80% is down to the illicit timber trade.

The Lima summit offered what I think was a unique podium for the plight of indigenous peoples, allowing them a chance to address delegates and raise their concerns with international media.

In the middle weekend, eight Latin countries pledged to restore a further 20 million hectares of degraded land  – equally important will be how they treat local communities.

The people’s climate march last Wednesday was as much about human rights as the environment.

That’s the latest update from the team at Climate Action Tracker, delivered halfway through the Lima talks. It’s slightly improved on previous projections, thanks to the US and China pledges, but it’s still in the danger zone. The 2015 Paris summit has a lot to deliver.