What are the key issues with which negotiators will be grappling during this round of UN talks in Bonn? 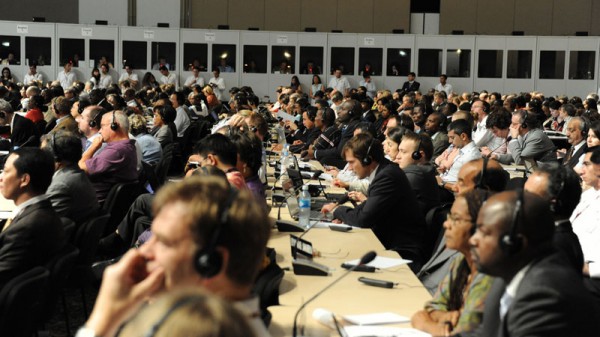 This week’s climate talks in Bonn are an important stepping stone ahead of this December’s UN climate conference in Lima (COP20).

Once that concludes, only 12 months remain before 195+ governments aim to finalise a new legally binding climate agreement at the end of 2015 in Paris.

Many vulnerable developing countries have made it clear that they want to see far more action to address the impacts of growing climate disruption in addition to substantial emissions cuts.

As an organisation working to support vulnerable communities living on the climate change front lines, often in partnership with developing country governments, we couldn’t agree more with these priorities.

So, what do governments need to do in Bonn this week to lay the foundations of a 2015 agreement that really supports vulnerable countries and communities in the face of climate change?

Ensure adaptation is part and parcel of the INDCs

The so-called Intended Nationally Determined Contributions (INDCs) are likely to be a hot topic in Bonn.

Put simply, these are the climate pledges that all countries are expected to deliver early next year for the period after 2020. We want to see governments keep emissions reductions at the very heart of the INDCs, but there is also a pressing need for countries to clarify how and in which ways they can demonstrate their contributions to global adaptation efforts.

The AILAC group of countries from Latin America, for example, has stressed the benefits of covering adaptation, in addition to mitigation, in the INDCs. They rightly see this approach as a way to strengthen adaptation measures in both the international and domestic contexts.

We’ll be watching closely to make sure that this is the case.

Agree to a global adaptation goal

The Cancun Adaptation Framework (CAF) agreed in Mexico in 2010 was an early and commendable attempt to set out key parameters for international cooperation on adaptation in support of vulnerable developing countries. Yet, the CAF actually fails to link the level of adaptation action required with the climate impacts that poor countries can expect to experience in the coming years.

This is a problem because any temperature increase beyond 1.5 or 2C would, in many countries, require vast amounts of adaptation. What is more, such levels of warming may also require tough decisions to be taken, including identifying areas where adaptation measures would fail altogether.

The current 2015 negotiation text mentions a number of these critical issues, including proposals for a global adaptation goal – but it’s not there yet.

What’s missing in particular is a financial commitment (and target) from developed countries to help pay for adaptation in poor countries, as part of a global adaptation goal.

Although we cannot expect to see any progress in Bonn on the scale of the funding, negotiators should not forget that, sooner or later, they’ll need to signal just how much money they’re willing to commit to adaptation – and ensure they have processes in place to allocate it fairly and effectively based on the needs of the most vulnerable communities.

It must also be accessible to civil society. What needs to happen in Bonn is in depth discussion around the key pillars of the 2015 agreement relating to the adaptation goals and how to assess progress made towards achieving these goals, including finance.

If governments can identify the key sticking points that will require further work, this will give them a fighting chance of coming to an agreement by Paris.

Recognise the needs of the most vulnerable

To really serve the needs of the world’s poorest and most vulnerable people, the 2015 agreement must highlight the need for all climate action to be rights-based, gender-equitable and participatory, as set out by CARE, the Mary Robinson Foundation, and others.

Though the 2010 Cancun Adaptation Framework contains a catalogue of ‘guiding principles’ for action on adaptation, and urges “a country-driven gender-sensitive, participatory and fully transparent approach” so far these positive steps are yet to make it into the draft text which will underpin the 2015 climate agreement. The Bonn session is the time to fix this.

In fact, of the three international frameworks currently under discussion on climate, development and disaster risks, the UNFCCC agreement is now the least people-centred and rights-based of all.

In contrast, the proposal for the Sustainable Development Goals (SDGs) highlights that “people are at the centre of sustainable development” and makes clear reference to human rights.

The draft post-2015 Disaster Risk Reduction Framework also states that “managing the risk of disasters should also be aimed at protecting persons, their livelihoods and property, while respecting their human rights.” The UNFCCC has some serious catching up to do here.

Commit to tackling loss and damage

After decades of failure to sufficiently reduce global emissions, loss and damage is becoming a reality for millions of poor and vulnerable people worldwide.

Last year’s decision in Warsaw to establish an international mechanism on loss and damage was a milestone in itself, but much work remains to be done to move this critical issue forward.

The current 2015 draft text highlights the need “to include provisions for loss and damage for cases where mitigation and adaptation will not be sufficient”. Governments must now prepare to come up with some answers.

The poorest nations will be seeking reassurances that those countries that bear the greatest responsibility for past emissions will be held accountable. Making additional money available to pay for climate-related loss and damage that is already occurring must be part of this.

Ultimately, the 2015 agreement must recognise the Warsaw mechanism and seek to increase its impact, in support of the world’s poorest and most vulnerable communities.

CARE will be following progress on these critical areas closely as governments continue their discussions in Bonn and later this year in Lima. Above all, we want to see the needs and voices of the vulnerable front and centre on the road to Paris. Focusing on these critical issues will help governments to do just that.