400,000 people on NY streets trump ‘pledges’ by Cameron and Obama 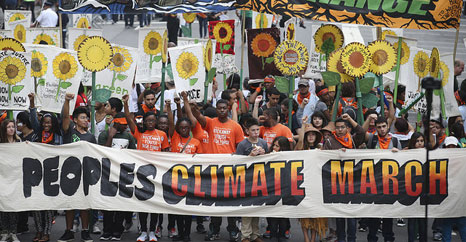 This week’s Climate Summit was a phenomenal success, delivering on UN Secretary General Ban Ki-moon’s goal to create new political will to tackle the climate crisis.

I’m talking of course about the Climate Summit held on Sunday in the streets of New York City: the People’s Climate March. (That whole Tuesday affair with President Obama and Leonardo DiCaprio was really more of a side-show in the end.)

At last count, 400,000 people attended the People’s Climate March, including thousands of leaders. Leaders who may not be as well known as the likes of David Cameron and Mr. Obama, but leaders who are arguably doing quite a bit more, well, leading.

Leaders like Bill Aristovolus, the superintendent of an energy efficient building here in NYC who ferried supplies to all of his occupants for two weeks during Hurricane Sandy. Or Mari Rose Taruc, a Filipina climate justice organizer from California who has been going toe-to-toe with fossil fuel giants like Chevron, and winning.

The attendees at the People’s Climate March also came with firm commitments and pledges, just like the Secretary General asked them to.

Ranchers were there, pledging to stop the Keystone XL pipeline in its tracks. Union workers were there, committed to helping build a clean energy economy. Teachers were there, sharing their plans to educate the next generation about the importance of sustainability.

While many politicians on Tuesday pledged to make pledges sometime in the future, the People’s Climate March delivered immediate results in one key area: demonstrating a tipping point in public demand for climate action. 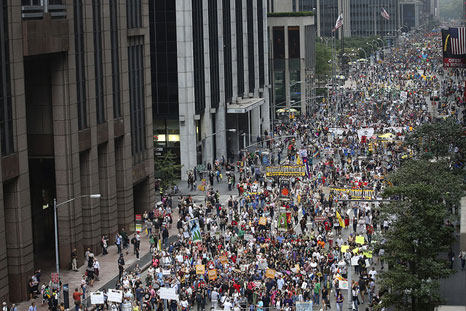 It’s hard to measure such things as public demand, but media coverage is one good way to see if the message is getting through.

The march not only graced the front page of the New York Times, it was featured on nearly every major newscast in the United States and in many countries around the world. The march became a cultural phenomenon overnight with The Daily Show, The Colbert Report, and Jimmy Kimmel talking up the importance of the event.

It even broke through to daytime talk shows like The View, where Whoopi Goldberg and Rosie O’Donnell sounded downright revolutionary chatting about the importance of addressing climate change.

The problem with the UN climate process has never been a lack of policy proposals or reports. Or even really a lack of pledges (how many times have politicians trundled up to the microphone at a climate summit and “pledged” to take urgent action, never to deliver?).

The problem has been one of power. Namely, the fossil fuel industry has all of it and our politicians therefore do their bidding.

The People’s Climate March helped balance the scale. The fossil fuel industry still has all the money. But we’ve got the people. And 400,000 in the streets of New York, and hundreds of thousands more in cities around the world, are a powerful counterweight.

Will we be heavy enough to outweigh Big Oil? Only time will tell. But the Climate Summit that took place in the streets on Sunday was a powerful step in the right direction. Far more powerful than anything that took place inside the UN.

Jamie Henn is co-founder and Communications Director for 350.org