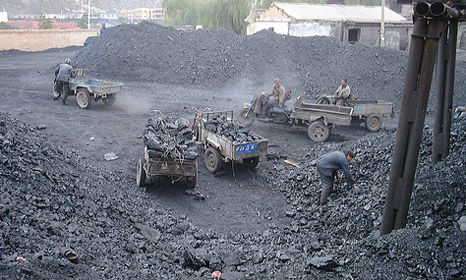 China is poised to announce early next year plans for coal demand and carbon emissions, under its next five-year plan from 2016, and under a UN timetable for policy pledges under global climate negotiations.

The Carbon Tracker Initiative on Monday published a report on the implications of one possible outcome, a global “low-demand scenario” which would see Chinese coal demand peak as early as 2016.

The investor advisory group calculated global coal demand in conjunction with the analyst firm, the Institute for Energy Economics and Financial Analysis (IEEFA).

In the low-demand scenario, IEEFA applied the latest regulatory announcements on coal policy worldwide and the latest technical advances, for example in energy consumption efficiency and renewable energy.

The result was a rapid levelling off in global thermal coal demand, which would peak this decade and then start to fall in the late 2020s. That contrasts with the International Energy Agency’s latest outlook, which foresees continuing growth in global coal demand, albeit at a far slower rate compared with the last decade.

In China, the implication of CTI’s low demand scenario was for a peaking in 2016.

That would put the global traded coal market in reverse, CTI said, by turning China into a net exporter and imposing a structural, long-term decline in seaborne thermal coal prices.

The stakes are high.

Chinese coal demand growth has probably peaked, given this regulatory focus, but the question remains when absolute demand will peak. 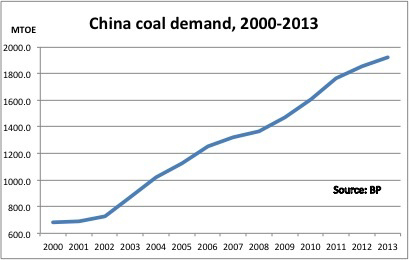 More than 100 leaders will meet at a United Nations General Assembly meeting on Tuesday dedicated to climate change. Given that China’s premier Xi Jinping will be absent, there is clearly no prospect for a Chinese policy announcement.

But the world will not have to wait long to find out China’s plans for coal demand and carbon emissions, with two timetables looming in the country’s economic planning.

First, China will announce next year details of its thirteenth five-year plan from 2016-2020.

Second, all nations have committed to sign a new climate agreement at the end of next year in Paris, setting global climate action beyond 2020.

At a conference in Warsaw at the end of last year, countries agreed to publish their proposals for climate action at least six months in advance of the Paris conference, or by the end of May 2015.

These Intended Nationally Determined Contributions (INDCs) were intended to give countries and external observers time to scrutinise offers in advance of a final deal, and so increase transparency and fairness and raise the prospects for greater engagement and negotiation.

Several countries and regions including the European Union, the United States and China appear to be choreographing climate policy announcements to fit the INDC timetable.

The EU will finalise its contribution at the European Council of leaders next month, and has confirmed that it will publish its plans in the first quarter of next year. The United States is consulting on a Clean Power Plan to cut carbon emissions by a third from the power generation sector, with a final rule due next June.

China’s chief climate negotiator, Xie Zhenhua, said that the country could announce early next year its first carbon cap. In addition, briefings suggest that China will announce the launch of a national carbon market before 2020. However, it appears unready to announce a peaking year for carbon emissions.

The CTI report on Monday painted a risky picture for coal prices and investments, if its low-carbon scenario became reality.

New capacity can be divided between greenfield and brownfield sites, according to whether these are for expanded coal production capacity at new or existing sites.

New greenfield capacity is most vulnerable to a structural decline in coal prices, given that these sites face additional infrastructure costs such as port and rail facilities.

Seaborne coal prices are already weak, below $70 in the seaborne market, which was not enough to cover cash costs for nearly half of production, the report said.

“These numbers suggest that, subject to being able to transport production economically to the demand, expensive new mines would be surplus  to requirements in a low demand scenario,” it said.

“There is a total of $112billion of potential capex excluding China that exceeds the breakeven price of our low-demand scenario. 61% of greenfield mines are over the thresholds of our low demand/price scenario. Greenfield regions are also likely to require investment in infrastructure making them even less economically viable. This suggests that high cost new mines are the most likely to be affected from a low demand/price scenario.”

CTI suggested that investors should scrutinise coal producers for their response to the threat of weak prices, with some diversified miners already focusing on alternative commodities.

CTI found that even its low-demand scenario exceeded coal demand compatible with a safer climate trajectory, staying within a 2C global average warming, which would require even steeper demand reductions.

The coal industry and its investors have much to watch out for in the next nine months.