Why New Zealand did not accept ‘world’s first climate refugees’ 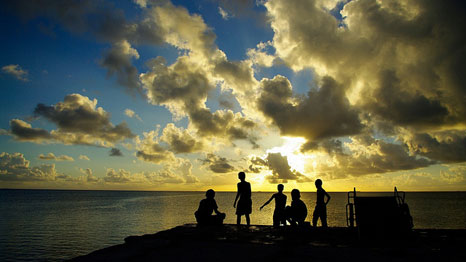 Tuvalu is an idyllic island, but climate change means some want to leave (Pic: Tomoaki INABA/Flickr)

Does this open the door to millions of people who might be displaced by climate change in the future?

In June, New Zealand granted residency to a family from the Pacific island state of Tuvalu.

Last week the Washington Post asked “Has the era of the ‘climate change refugee’ begun?”

I spoke to a number of experts who say the media headlines have misrepresented the case.

The case is far more interesting than the headlines suggest. Zeke Simperingham, an international lawyer with NGO Displacement Solutions puts it bluntly.

“This decision of the New Zealand Immigration and Protection Tribunal does not grant the applicants refugee status under the 1951 Refugee Convention. The applicants are not the world’s first climate change refugees.”

But the case has forced the issue into public debate, argues François Gemene of the Institute of Political Science, Paris.

“The reality is always a bit twisted by the media (but which reality isn’t?), but cases like this signal that the whole issue of climate and migration is not just a matter of environmental politics, but has much wider political implications,” he says.

They claimed climate impacts would endangered their lives, if deported to Tuvalu. The court rejected this argument too.

Finally the family made a claim for residency on humanitarian grounds. They made two arguments for this. First, that the family had close family ties in New Zealand. Second that they would be exposed to the adverse affects of climate change if returned to Tuvalu.

It was the family connections that proved decisive.

“The Tribunal held that the exceptional humanitarian circumstances here were the applicants’ strong family ties and community connections in [New Zealand], and not the climate change-related claims about Tuvalu,”  says Professor Jane MacAdam, director of Centre for Refugee Law at the University of New South Wales.

But that doesn’t mean that the impacts of climate change were irrelevant to the case. Zeke Simperingham again:  “The significance of the decision is that the Tribunal expressly recognized that ‘exposure to the impacts of natural disasters can, in general terms, constitute a circumstance of a humanitarian nature’.”

After the case, the media raised the possibility that there may now be millions of people who could now make residency claims. Perhaps, across the world, there are millions who can now use climate impacts to gain entry to another country.

Yet … “Legally, this has no impact at international level,” says Cosmin Corendea, a legal expert at the United Nations University. “It is not significant for the international arena, as this is an isolated rule … and the decision of the court may not set a precedent, but an example at best.”

Jane MacAdam and Zeke Simperingham both confirm this. But Simperingham adds that this does not mean the case is internationally irrelevent.

Other courts have no obligation to consider this case, but the logic of the arguments made could be convincing, he said.

“Tribunals and courts in other countries looking at similar issues could find the reasoning persuasive. This would be most significant where countries with national legislation preventing deportation on a humanitarian basis also view exposure to natural disasters and the adverse impacts of climate change as a relevant humanitarian consideration.”

Although the legal implications are small François Gemene argues that there may be wider political ramifications.

“I think it is important to look at the political impacts of cases like this – and if an issue doesn’t make headlines, it is unlikely to be addressed by policies. I’m afraid that’s the sad reality of policymaking,” he says.

And the case does raise wider political questions. The international community is debating how best to protect people who move due to climate change.  In the future there may be a group of people who need to cross borders in response to natural disasters and climate change.

Yet the legal status of these people is currently unclear. The governments of Switzerland and Norway established the Nansen Initiative to address this issue.

However, most people who move due to disasters and climate impacts will move within their own country.

They will not cross an international border, and will never be in a position to make any kind of legal claim. Considering how to support and protect internally displaced people will be vital. Creating opportunities for people to migrate safely and legally before they are displaced is also vital.