Youth: The hidden life force behind the UN climate talks?

Activist Chris Wright reflects on the camaraderie, coffee dependency and triumphs of youth at the UN negotiations 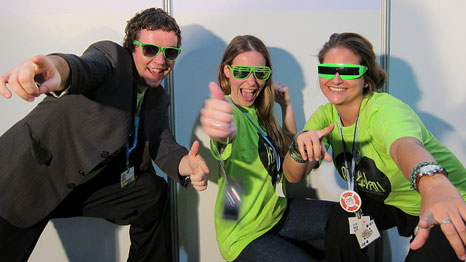 It must have been 10 or 11pm. I can’t remember exactly when, but I know negotiations should have been over by then.

After two weeks in Doha, my fingers bent into the keyboard and caffeine had begun to compete with white blood cells for space in my veins.

For two days I had followed negotiations into the mornings and slept in forgotten soft corners of the food court.

The Youth-based Non-Governmental Organisations (YOUNGO) had just called an emergency meeting. We needed to do something about Loss and Damage.

Developed nations were ready to pull the rug from under developing countries’ feet. More than 70 of us ‘young people’ were still in the conference centre, but we didn’t have much time to talk. We had to act.

We did. At 3am, with stunning visual imagery and heartfelt emotional pleas, our actions spread rapidly and were beamed into living rooms by BBC, CNN, MSNBC and Al Jazeera.

Within 24 hours, rumours that the negotiations were about to break down spun into a story of success. Loss and Damage discussions were saved. Perhaps it had nothing to do with young people.

But perhaps it did. 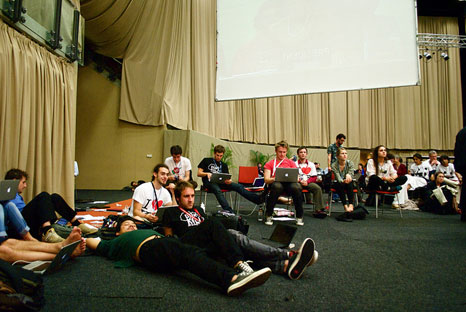 Young people camp out at the final plenary of COP17 (Pic: UKYCC)

As a 22 year old university student, I still remember how naively excited I was when I first arrived at the UN’s annual climate conference.

After brainstorming solutions with 600 other strange but impressive young people during the Conference of Youth, I was suddenly in the epicenter of the most important negotiations on the planet.

Little did I know that the food would be such a let down.  But I was still excited.

I looked shyly upon every pink- and crimson-badged negotiator both with awe and envy. I had passion to burn and a bouncy castle of acronyms jumping round my head. But it was the acrobatics of young people that impressed me the most.

Young people can be seen as the insignificant clowns of the UN climate talks. It’s no secret. We’re not allowed in the big show, and most of the old lobbies don’t have room for growing bodies and inquisitive eyes.

We’re seen as something to smile upon or avoid. Something to laugh at or perhaps even something to remind negotiators of the “real reason why we’re negotiating”.

But let me tell you what young people really do. We engage and we inspire the UN climate negotiators to possibly greater goals.

Every year, new young faces flock to the UN climate talks. Outside of the negotiators, we have close to the most representative delegation in terms of size, geographical spread and gender.

This is pretty amazing when you consider that no-one in YOUNGO receives financial support for their efforts.

Each comes with different passions,  skills and an amazing diversity of organisational perspectives. Many have been working voluntarily on youth policy submissions, working groups and logistical needs throughout the year.

However, many also arrive for the first time at the annual Conference of Youth, days before the negotiations begin, without knowing how the UN or the youth constituency operates.

This would be a tough human resource challenge for any organization. But each year we find a way, through passion, perseverance, and democratic panache. 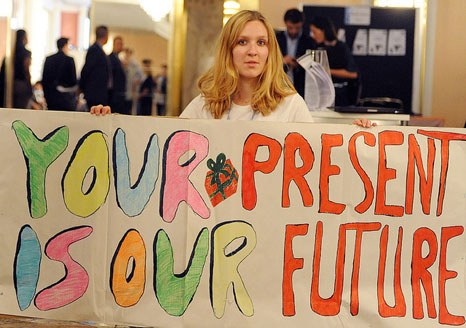 This year, for instance, hundreds of young Latinos have already begun travelling by bus on a Climate Action road trip from Mexico to Lima.

On their travels they are engaging communities, schools and entire cities around climate change. They will come to Lima not just with a plan for the two weeks of climate talks, but with climate actions prepared for the  months and years ahead.

Once again, this year will not only represent an opportunity to lobby national negotiators, but act as a stage for global collaboration and skill sharing between young people who will be working together on climate action for years to come.

For many young people involved in the UN climate talks, no conference is ever a one-off event. It is a stepping stone into building a stronger, life-long commitment to climate action.

When YOUNGO steps inside the negotiations, it is the passion and energy of its young people that connects with negotiators year after year.

While we do represent more than half the world’s population, and the ones who will have to deal with the greatest climate impacts, we do not have thick-pocketed lobbying power that others may enjoy.

What we do have is the energy to inspire. It might not be much, but I have never been at a UN climate conference without talking to a negotiator about how the energy of young people at the conference helped them through a difficult negotiating session.

It’s always tough to measure, but indefatigably present. In every action, lobbying effort, submission paper, corridor chant and hallway theater production, you can always recognize that signature of inspiration from young people.

Take for example our gold star lobbying campaign in Cancun, our “I heart KP” joint-NGO campaign in Durban, our Loss and Damage campaign or some of the radical Civil Society actions in Warsaw at which young people were at the forefront.

Young people also inspire action back home. Young people involved in the UN climate negotiations write blogs, engage national media, and have even started their own NGOs to better inform young people around the world about climate change. 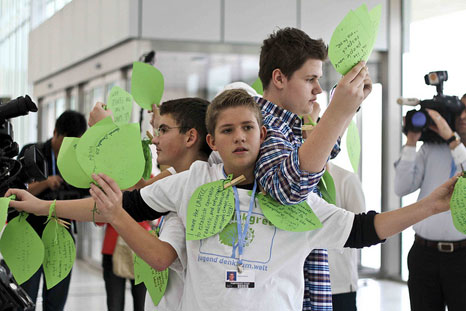 An action taking place at COP18 in Doha (Pic: theverb.org/Flickr)

For instance, during the 2011 climate talks in Durban, South African young people came together with young people around the world to form their first national climate coalition.

At the 2012 talks in Doha, Arab youth from across the region brought an unprecedented amount of pressure on Middle East and North Africa negotiators after forming the Arab Youth Climate Movement.

Again, in Lima, we will see an unprecedented gathering of Latino youth around climate change, seeking to chart a direction for Latino youth collaboration for the years ahead.

Like every constituency, we are heavily involved in strategy meetings and textual analysis that becomes a daily ritual of the UN climate process.

However, it is these unique elements that extend our impact beyond textual submissions, and indeed beyond the UN itself.

When this energy is injected directly into the negotiations, young people can shape the very course of the UN’s climate talks.

Watch out in Lima, we’re about to do it again.

Chris Wright is a young activist at Adopt A Negotiator