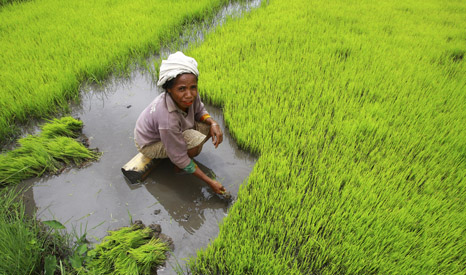 Integrating a gender approach in the new climate agreement will be vital to provide the legal base for promoting gender responsive climate action both at international and national level.

That will be necessary for the improvement of effectiveness of climate policies and its implementation, as both women and men can make considerable contributions to adaptation and mitigation and because climate change impacts women and men differently.

Climate change would actually increase the inequalities if no counter measures will be taken.

In developing countries women are in majority in the agriculture labor force, to name one example. They produce up to 70% of the staple food.

Estimates from the UN’s Food and Agriculture Organisation (FAO) suggest that if women had the same access to productive resources as men, they could increase yields on their farms by 20–30%.

Adaptation to climate change will require strengthening of enabling conditions and practical efforts in agriculture, coastal areas and water management. In most developing countries, women and girls are the primary providers of water for domestic consumption.

Agriculture can, together with sustainable forest management, also provide a considerable mitigation tool, which is readily available with relatively modest investments compared with the energy or transport sector.

In many developed countries household energy consumption is some 30%.

Women manage most of this energy consumption, as well as water consumption and waste management. Women also do 80% of the daily purchasing for households in the OECD countries.

In many developed countries and fast developing economies, women are also in majority in the workforce in many service sectors such as schools, day care centres, elderly homes, hospitals and shops and could take the lead for consuming less energy and material.

These few examples indicate why it will be vital to increase the participation and leadership of women in both adaptation and mitigation and provide equal access to the means of implementation in the new agreement.

The negotiations within the UN’s climate body the UNFCCC have this year been carried out in a slow but positive atmosphere.

Proposals on integrating gender equality have been made in the latest meetings by important regional groups and some countries.

Some of the proposals emphasise gender equality as guiding principle and cross cutting issue. That kind of provision would cover all activities of the new agreement. Some proposals have been addressing adaptation and means of implementation.

The parties and groups of parties making these proposals include the Africa Group, Least Developed Countries, Environment Integrity group and Latin American and Caribbean group as well as Iceland, Mexico and Norway.

The co-chairs of the negotiations have included gender approach as guiding principle and also in capacity building   in their informal paper on elements of the draft treaty, which will be considered in the coming meeting.

The introduction of gender equality as a principle in the new agreement is of the utmost importance, as explained here and also because the convention itself does not include gender provision, unlike the other major Rio conventions on biodiversity and desertification.

However, parties need to consider not just whether, but how, to best ensure gender equality in the new agreement. The traps of victimising women, reinforcing gender stereotypes and categorizing women with minority groups need to be avoided.

Along with the negotiating process concrete decisions have been made during the last five years on the activities within the UNFCCC.

In accordance of a major gender decision in 2012, gender is now a permanent item on the agenda of the main UN climate conferences.

Interested parties are working on a framework decision for Lima to give further guidance and support for concrete action to promote gender equality and active participation of women.

Aira Kalela is senior advisor on sustainable development, climate change and gender equality for the Global Gender and Climate Alliance. Previously she was special representative on climate and gender in Finland’s Ministry for Foreign Affairs.