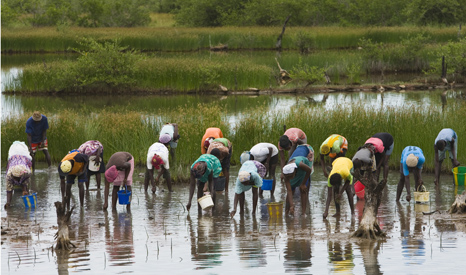 As a means to ensure a positive outcome in Paris next year, where a UN climate deal is set to be agreed, one important element is delivering on the pledges already made by the developed world for financing climate change action in developing countries.

This consists of a promise of US$ 100 billion a year starting from 2020 through the newly set up Green Climate Fund (GCF) with its Secretariat in South Korea.

There are three major sticking points with the financial pledges made so far.

The first is that there are no firm commitments for the period from now until 2020, unlike the period from 2010 to 2012 when there was $30 billion provided over three years as part of the Fast Start Funding (FSF) pledge made in COP16 in Cancun, Mexico in 2010.

Thirdly the developed countries are planning to fulfill their pledge of $100bn a year from 2020 with a large component of private sector funding rather than provide the entire amount from government coffers.

One way to kick-start the process of getting funds to actually start to flow before 2020 is for the developed countries to consider another interim funding pledge just for adaptation finance.

This will almost certainly have to come from governments as the private sector is unlikely to fund adaptation in the poorest developing countries.

This pledge could be made at COP20 in Lima this December rather than wait for COP21 in Paris in December next year.

Such a pledge would go a long way in buying goodwill from the most vulnerable developing countries (who number over a hundred countries) for the successful outcome of the negotiations in Paris next year.

A good start has already been made in this direction by Germany’s Chancellor Angela Merkel who  pledged $1bn towards the GCF a few days ago.

If other heads of government of the developed countries follow her lead and make similar pledges in New York at the Climate Change Summit or at COP20 in Lima in December then the negotiations toward Paris will move forward on a much more positive note and the potential for a positive outcome (unlike the failure of Copenhagen in 2009) will increase significantly.

The issue of providing funding from developed countries for climate actions (both mitigation as well as adaptation) in developing countries has always bedeviled the climate change negotiations in past.

One experience, that we should try to avoid next time, is that the developed countries make their funding pledges at the last minute and as part of a quid pro quo strategy to get something in exchange.

Also, once pledges are made they are actually implemented in anon-transparent way which causes resentment rather than gratitude from the recipients.

Hence a unilateral declaration of funding pledges for adaptation in the poorest and most vulnerable developing countries in Lima (rather than waiting for Paris) would be a significant gesture of goodwill from the developed countries which would help the negotiations move forward in a positive direction.

This means that the Treasuries of the developed countries need to look to making their pledges this year rather than wait for next year.

Even though times are tough this money will have to be found eventually and it would be to the developed countries advantage if they found the money now and made their pledges now as well.