Comment: The EU needs to break its dependence on Russian gas, but seems incapable of formulating a clear strategy 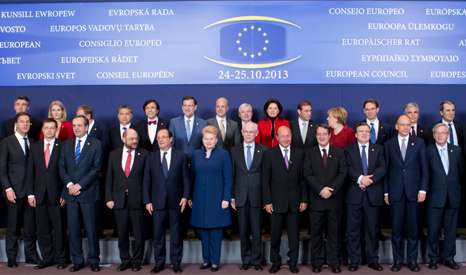 Everybody knows this deep disconnect between cause and consequence is caused by Europe’s entanglement with the Russian fossil fuel economy, and most crucially EU dependence on gas imports.

Europe needs to break this link. We cannot spend the next 30 years tempering our support for sovereignty, democracy, human rights and rule of law in the Eastern neighbourhood because of a fear that the lights will go out, or our populations will freeze.

Geopolitical flexibility is critical for any major power, and Europe needs to invest in regaining its diplomatic freedom; much as the US has freed itself from Middle East oil dependency.

Though there is nothing Europe can do about its gas co-dependency with Russia in the short term, there is much it can do in the medium term.

The practical route to securing greater political independence is for Leaders to agree to strengthen the 2030 energy and climate package which will be discussed at this week’s European Council.

In response to the Ukraine crisis energy sector special interests have been active in the media. Access to US gas exports and more European shale gas are both pushed as solutions to import dependency on Russia.

The problem is neither of these proposals will work. US gas producers are already using Ukraine as a tactical ploy to push for more export licences.

But when they have them why would they sell to Europe for just over half the price they could get in Asia? European shale gas is limited and at a very early stage of exploitation. Even the International Energy Agency estimates it can only supply 2% of European demand by 2030.

Wiser heads have argued for greater gas and electricity interconnection within Europe, which would indeed make a difference to security at the margin.

But the greatest impact would come from action to stop the wasteful use of gas in inefficient homes and factories across Europe, and particularly in Eastern Member States who still lag far behind in efficiency.

An aggressive package of cost-effective energy efficiency – combined with continued roll out of renewables – would reduce European gas demand by over 50% by 2030. It would also save Europe €1-2 trillion in energy costs by 2030.

In theory these policies could remove Europe’s need to import any Russian gas. But that would be neither feasible nor desirable. Europe needs a stable and engaged Russia as its neighbour.

Russia needs the revenue from gas exports from Europe, as China is being extremely cautious in exposing its energy security to Putin’s political volatility.

But radically reducing Europe’s gas demand – and strengthening the internal gas and electricity market – would allow Member States the flexibility to use Russian gas when the price and conditions are right, and give them the market power to switch suppliers when needed.

Despite the compelling energy security logic, strong policies on energy efficiency and interconnection are not on the agenda of the March Council.

Europe has forgotten the lessons of the previous Ukraine energy crisis, which drove energy security to the top of the agenda for the 2020 energy and climate package in 2007.

It is a common misperception that the 2020 package was only designed to address climate change.

Without the driver of energy security it is highly unlikely there would have been Member State agreement on the ambitious European 2020 renewables target or action on energy efficiency.

As memories faded, energy security became perceived as less important and the competitive threat to manufacturing from cheap US shale gas rose to the top of the EU energy agenda; helped again by intensive special interest lobbying from the chemicals industry.

This is despite a mass of evidence suggesting Europe is comfortably maintaining its competitive advantage and growth in chemicals and other energy intensive sectors through better efficiency.

The neglect of security and exaggerated fear of industrial competiveness has led Member States to argue for greater “flexibility” to set their national energy policy. They believe this will make action cheaper than a Brussels-driven framework.

There is also growing distrust with what many see as an attempted “competency creep” over national energy policy by the Commission.

As a result, the only nationally-binding EU-wide policy instrument from 2020-30 will be emissions trading driven by a relatively weak 40% greenhouse gas (GHG) target.

Commission analysis shows this carbon-price driven approach will use more gas than one driven by direct investment in renewables and energy efficiency.

European leaders are acting as if they fear policy prescriptions from Brussels more than geopolitical aggression from Putin. You can be sure that Moscow is acutely aware of this split between the Member States and the Commission.

Luckily there is time to change course, rebalance the objectives of the 2030 package and rebuild trust between the Commission and Member States.

Increasing the Barcelona grid interconnection goal to 20% would drive internal market integration, lowering costs and increasing security. Agreeing a goal that Europe should implement all cost-effective energy efficiency measures by 2025, and tasking the Commission to develop policies to deliver this, would break our unhealthy dependence on Russian gas imports.

Practically these policies would require all countries having a practical plan to cost-effectively retrofit their building stock to high efficiency standards by 2030, and would provide European finance and assistance to help deliver this where necessary.

It would accelerate the liberalisation of EU markets in energy services and construction so that companies can operate at an efficient continental scale.

Mandatory energy efficiency measures would be placed on all companies receiving exemptions from the emission trading system, along with supportive industrial policy and incentives to help deliver new innovative solutions for global markets.

Studies show that with a pro-active policy framework even the EU chemicals industry can be globally competitive into the future.

None of the options above are available from purely national action. All Member States must reduce their dependence on Russian gas if the EU as a whole is to regain its independence of action.

Crises bring into sharp relief who your friends really are. European Leaders must focus this week on how to deliver the benefits of cooperation between European countries, and dwell less on fears of interference from Brussels.

Nick Mabey is Chief Executive and a founder director of E3G (Third Generation Environmentalism). This article first appeared on the E3G website.