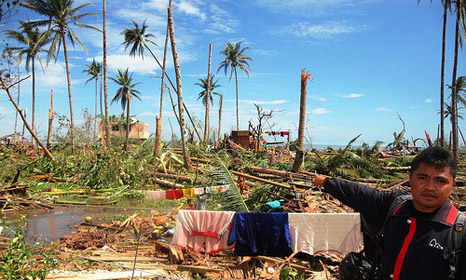 Typhoon Bopha left around 600 dead and thousands homeless on the Philippines in 2012 (Pic: Sonny M/Flickr)

For a particularly vulnerable country like the Philippines, we want to see heightened global cooperation that should be out-of-the-box in order to avert the climate crisis.

Secretary John Kerry’s message is the kind of tone we want to hear from the United States and from every world leader.

It is likewise reassuring to see the US and China working together strongly on climate change and I know this not from these public pronouncements but because we work closely with both these countries.

I think the major challenge is how to translate the rhetoric into genuine political will.

This will necessitate massive reforms in corporate media, which has a lot of influence on how constituencies and the public think about the facts surrounding the science of climate change and the solutions that are necessary to fight climate change.

It will require comprehensive reforms in the electoral system to ensure that politicians around the world listen to the overwhelming majority of scientists and equity experts.

It will require helping countries like the Philippines leapfrog into a cleaner development path. Renewable energy must be shepherded from a pipe dream into actual reality.

There is much to be done to make more efficient use of energy.

It comes as a big shock to me that in the hotel I stayed in in New York, the lights and ventilation were not automatically shut off every time I left the room; in contrast, in my hotel in Riyadh, the rooms had electronic sensors that tells the electric supply to shut off if I am not in the room.

The solutions are out there, and the kind of scale needed to confront climate change and pursue sustainable development for all must be the same kind of scale with which the industrial revolution took place.

What needs to be at the heart of this conversation is also the levels of consumption in the industrialized world and the disparity of levels of welfare between the people living in rich nations and those in struggling economies.

The United States, the largest and most powerful economy in the world, must use its weight to effect a genuine global transformation.

It is apparent that the executive branch of the United States is heeding this call, but the situation demands entire nations to act, not just one-third of governments.

Report: US outlines plans for durable and ambitious UN deal

As I always have articulated, the climate change battle will need global consensus for it to be won, but this battle will really be won or lost at the grassroots.

Every community has a stake, and every individual must be part of the solution.

Those who will bear the burden of the impacts are the most vulnerable living the most challenging lives.

Our national hero, Jose Rizal, once wrote “I die without seeing the dawn brighten over my native land.

You who have it so see, welcome it, but forget not those who have fallen during the night.”

We are at war; a war we cannot afford to lose.