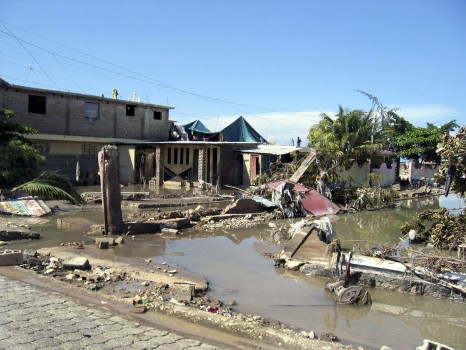 Here we are again. Barely three years after the drought disaster in the Horn of Africa, super-typhoon Yolanda Haiyan in the Phillippines has claimed thousands of lives.

What will it take for decisive action to be taken to set up systems that enable all people, rich or poor, to adapt to and become resilient to climate change?

Two decades after climate change became a global policy priority, the international community is still locked in negotiations about mitigation. It’s time for this to change.

The science and proposed policy actions have sent us clear signals. Emission trends are increasing, but current actions to reduce greenhouse gas emissions are insufficient. At this rate, we cannot avoid a catastrophic temperature rise.

In short, governments must plan for the best – mitigation, but prepare for the worst – adaptation.

In many countries, adaptation to climate change means protecting land productivity because climate change and land degradation fuel each other in a cyclical manner. To adapt is to protect vital natural resources; water, soil and biodiversity. And it is about taking steps to prepare for climate fluctuations and disasters.

But action is mostly being taken after climate impacts are evident. For instance, when prolonged droughts lead to forced migration or repeated crop failures.

Over one billion poor people are living off degrading land that barely supports their needs. Climate change will increase that number and with it, those vulnerable. People on an empty stomach are a tinderbox for social, political and economic chaos.

Sustainable agriculture could make the big difference. It is one of the least costly mitigation strategies with many adaptation co-benefits. It increases food security and improves community and ecosystem resilience. But the adaptation must happen now, if we are to avoid social chaos and international disruptions.

The potential for sustainable land management to foster climate adaptation and resilience is not news, but it is worthy of our attention. We have the tools but we must use them. The failure to act in the face of evidence is to play a dangerous political game with our future.

Whether the recent disasters are climate change-related is debatable. What is not, is the unprecedented frequency of extreme climatic events in the last Century – especially after the 1970s. What is also not in question is the impact these events are having on livelihoods.

It is time we engaged in a serious conversation about how to manage the land because it has a bearing on the vulnerability of communities to climatic events, variations and change.

Smart leaders are those whom can rise above the politics to climate-proof their lands. I stand ready to work with such leaders. Preventive measures are more cost effective than disaster response, but time is of the essence.

Monique Barbut is the Executive Secretary of the UN Convention to Combat Desertification.