Published on 29/10/2013, 9:33am
A summary of today’s top climate and clean energy stories.
Email the team on [email protected] or get in touch via Twitter. 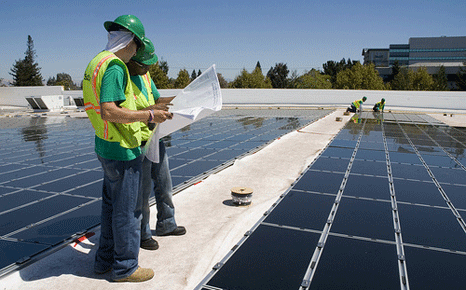 US: Oregon, Washington and California and the Canadian province of British Columbia agreed on Monday to align carbon-cutting policies in the coastal region, which together is equivalent to the world’s fifth-largest economy. (Reuters)

Brazil: Nearly 17,000 kilometres of road were built in the Brazilian Amazon rainforest every year between 2004 and 2007, according to a new study. The researchers from, from Imperial College London, say studies like this will help combat future deforestation by allowing for more accurate predictions of where it might occur. Even though roads often occupy less than 2% of a country’s land surface, they may have an ecological impact on an area up to ten times as large. (Science Daily)

UK: Pressure is being put on Britain’s big six energy companies to explain why bills have been going up when their wholesale electricity costs have fallen over the last three years. Last week, Prime Minister David Cameron said he wants to “roll back” green energy taxes, saying they have helped push up household bills to “unacceptable” levels. In the House of Lords last night, Lord Jenkin condemned the energy “oligopoly” and tabled an amendment calling for greater competition. Another amendment in favour of decarbonising all of Britain’s electricity by 2030, tabled by Lord Oxburgh, a former chairman of Shell, narrowly failed to pass. (Guardian)

Germany: In the southwest German city of Karlsruhe, researchers have found that heat generated by urban areas and their buildings, factories, sewers, and transportation systems could generate enough power to heat 18,000 households. (Environment 360)

Germany: German Chancellor Angela Merkel’s conservatives will argue for a new push in support of backloading of CO2 emissions certificates in coalition talks with the Social Democrats (SPD), according to a document prepared for the negotiations. (Planet Ark)

US: Walmart has more solar capacity than 38 US states thanks to rapidly dropping price of solar power spurring many big companies to put panels on the roofs of their buildings, according to the US-based Solar Energy Industry Association. (SEIA)

UK: Walmart, Tescos and Morrisons are driving the destruction of some of the world’s most precious habitats, according to a study by Rainforest Foundation UK. (RTCC)

UK: The BBC has come under fire from Andrew Miller, chair of the science and technology committee for favouring climate change sceptics in its coverage. The BBC said replied by saying that putting forward opinions not backed by science is part of its role. It is the second time in less than a month that the BBC has been slammed by a senior figure for giving too much credence to climate sceptics. (Guardian)

US: NASA is preparing its first spacecraft to provide “unprecedented details” about Mars. It is scheduled for lift off on 18 November from the Cape Canaveral Air Force Station in Florida. Analysis of data collected during the mission will help planetary scientists to better understand the history of climate change on Mars. (International Business Times)

Research: A third China-Brazil satellite will be launched from China at the end of this year to collect data for disaster prevention and environmental protection. The images will be used for a variety of purposes, including measuring deforestation and urban planning. More internationally backed, high-resolution satellites for disaster mitigation are on the way, according to Li Guoping, deputy director of the China National Space Administration. (Terra Daily)

UK: Pension funds worth £3 trillion are being placed at risk because managers refuse to acknowledge the risks their assets face from climate change and natural resource scarcity, warns a report by the charity ShareAction. (RTCC)

Japan: Toyota Motor Corporation was honoured this month for its ongoing efforts to promote a sustainable society by reducing, reusing and recycling resources by Japan’s Ministry of Economy, Trade, and Industry. (Toyota)

Research: According to a new report, climate change is not harming the Canadian grizzly bear, rather they are benefitting from warming temperatures say researchers at the University of Alberta. (French Tribune)