Obama and Nordic leaders agree to climate cooperation at G20 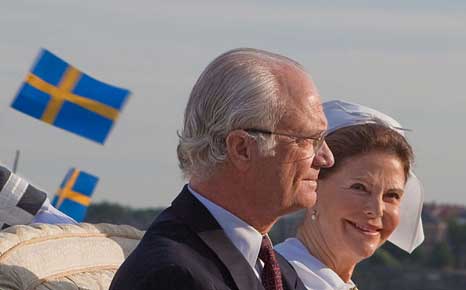 The king and queen of Sweden met with President Obama to cooperate in international climate negotiations and clean energy. (Pic: Bengt Nyman)

Sweden: President Obama met with the King Carl XVI Gustaf and Queen Silvia of Sweden before flying to St. Petersburg for the G-20 Summit and agreed with Nordic leaders to cooperate on international climate negotiations and clean energy. (Environment News Service)

UN: Emissions traders want United Nations climate talks in November to set rules on a trial system of globally linked carbon markets, according to their Geneva-based lobby group. Market-based measures to protect the climate are still attractive for nations because they offer the cheapest option. (Bloomberg)

IPCC: International scientists and some governments are calling for an overhaul of the United Nations’ “blockbuster” climate reports ahead of the delivery of the next big assessment. The governing body of the IPCC will discuss its future at a meeting in October. (Guardian)

Puerto Rico: Experts are sounding a new alarm about the effects of climate change for parts of the Caribbean, where rising sea levels could contaminate supplies of fresh water, and changing climate patterns could result in less rain to supply reservoirs in the coming decades, scientists and officials have warned. (Washington Post)

Research: Ice in Antarctica and Greenland is disappearing faster and may drive sea levels higher than predicted this century, according to leaked United Nations documents. (Bloomberg)

Research: Kim Maeng-ki, professor in the Atmospheric Science Department of the College of Natural Science at Kongju National University, has discovered that black carbon and dirt aerosol accelerate glacier and snow melting in the Himalayas and on the Tibetan Plateau. (Business Korea)

Ghana: Conservationists believe that a record number of whales have been washed ashore in western Ghana in recent days, and claim they have been affected by oil exploration activities in deep waters off the Ghanaian coast. (Guardian)

Australia: Sydney-based Climate Institute warns that if opposition leader Tony Abbot is elected tomorrow his climate laws would lead to an increase of carbon emissions by 9% by 2020. (RTCC)

Italy: Ferrari chairman Luca di Montezemolo says that more hybrids are on the way after the successful launch of the $1.34 million LaFerrari, which has already sold out. (RTCC)