Pathways to 1.5 or 2°C remain close for next two decades, but governments need to boost efficiency and biomass investment 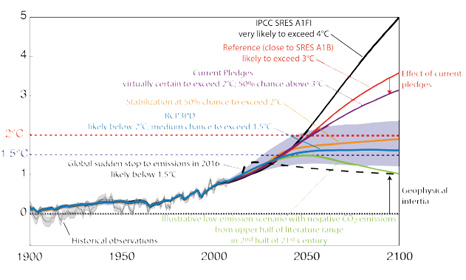 The Climate Action Network and Climate Analytics study is designed to offer policymakers and campaigners a guide of what levels of warming can still be avoided.

The authors warn that even with the implementation of radical policies temperatures are likely to break the 1.5°C ‘ceiling’ due to greenhouse gases already released into the atmosphere.

But they say a scenario where emissions peak in 2020 could see the earth cool from the middle of the century, avoiding dangerous levels of sea level rise and reducing extreme weather events.

“The 1.5-2°C pathways are close together for the next 20 years, and they diverge after that quite strongly. If you can get onto the 2°C pathway it means that 1.5°C is still within reach, provided new technologies are brought in during the 2020s and 2030s,” Bill Hare from Climate Analytics told RTCC.

“What the paper shows is that physically both goals are within reach and there are a number of studies showing there are technically and economically feasible pathways to get there.”

The study highlights the importance of biomass energy with carbon capture and storage (BECCS) as a means of quickly sequestering high levels of carbon dioxide.

Power stations burning biomass would need to be fitted with CCS technology, which could then store large quantities of carbon dioxide underground, completing its removal from the atmosphere.

In common with most other analysis of climate policies, it also says high levels of energy efficiency improvements will also be required.

International emission reduction pledges are currently deemed inadequate to put the world on a pathway to avoid warming of 1.5-2°C.

The 2012 UN Emissions Gap report estimated that by 2020 countries could be 6-11 gigatonnes of greenhouse gas reductions short of achieving that aim.

Business as usual scenarios outlined by the UN suggest the world could instead be on a trajectory for a 3-4°C warming.

Huge levels of greenhouse gas emissions are projected to come from developing parts of the world, and Hare stresses that action from all countries is essential.

“It’s not a new message, we’ve known it for 20 years, but it’s a message that often gets overlooked. We have to get everyone involved to solve this problem,” Hare said.

“All the major emitters have to be involved whether you’re aiming for 1.5 or 2°C.”

Countries will gather in Warsaw this November for UN climate talks. Developing a framework for a global emissions deal, to be agreed in 2015, is set to be one of the meeting’s priorities.