UK: Climate change could threaten UK food supplies sourced from overseas. The country could feel the effects of climate change in foreign countries before domestic impacts take hold. A report by the consultancy PricewaterhouseCoopers (PwC) said businesses must start thinking about the effects of climate change globally when considering how they would prepare to face the challenge. “We can’t afford to think of ourselves as an island when it comes to risks in investment, supply chains and trading,” said Richard Gledhill, partner PwC, sustainability and climate change. 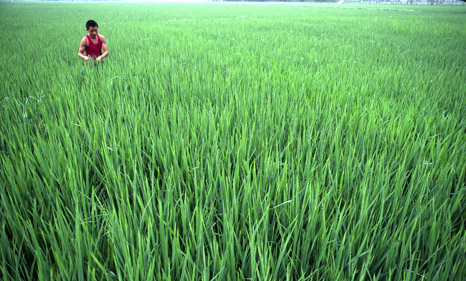 The impact of climate change on overseas food production could be felt in the UK before domestic effects take hold (Source: UN/John Isaac)

Australia: The debate over climate science has wasted time that could have been used to reduce emissions an expert from the Australian Climate Commission has said. Professor Will Steffen from the commissions, said: “I think we’ve lost valuable time with an infantile debate over the science, which has delayed the inevitable work of getting to the solution. There have been attempts to undermine the science. The science has been attacked and scrutinised and it’s stood up.” (The Guardian)

USA: Former US Vice President Al Gore has called on Barack Obama to block the Keystone XL pipeline calling it an “atrocity”. (The Guardian)

China: The Chinese government has approved a series of new measures designed to curb the country’s air pollution problems. One new regulation will force the biggest emitters, including coal power plants, to publicly release details on the make-up of their emissions. (New York Times)

USA: President Obama is holding back on using a potentially powerful tool to combat climate change according to Reuters. A Nixon-era statute allows any new project from oil drilling to road building to undergo an assessment of its damage to the environment. The administration was thought to be considering adding greenhouse gas emissions to the National Environmental Policy Act (NEPA) but it now appears enthusiasm for that strategy is waning. (Reuters)