The government ignored warnings that building large hydropower projects in the Himalayas was unsafe. Now Josimath town is falling apart 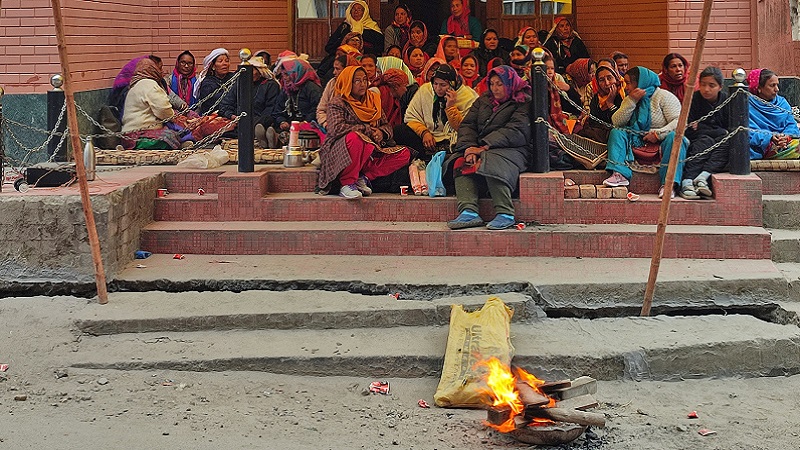 Residents take part in a sit-in protest to halt the demolition of two hotels deemed unsafe by authorities, demanding that they be first compensated for cracks that have developed in their houses in Joshimath (Reuters/Stringer)

When hairline cracks appeared on the walls and floors of his ancestral home in picturesque Joshimath, a small Himalayan town in the Indian state of Uttarakhand, Rohit Parmar thought the time had arrived to renovate his house. But, two days later, those cracks widened, and his residence today can collapse at any moment.

“That’s how the new year began for more than 25,000 residents of the locality and me,” Parmar told Climate Home.

The Chamoli District Administration has declared 723 houses have cracks in them.

Fearing the sudden collapse of residential buildings and hotels, the government has declared the area a landslide subsidence zone. Families are being shifted to hotels, guest houses and government facilities.

Hydropower in the Himalayas

Joshimath was a disaster waiting to happen, says Anjal Prakash, a research director at the Indian School of Business who worked on a Intergovernmental Panel on Climate Change report on the earth’s water and ice .

He said there are a number of reasons for the sinking, including the building of the Tapovan Vishnugad Hydropower Plant and the location of Joshimath on unstable glacier debris.

“The hydropower project’s tunnelling process that involved blasts punctured one of the underground reservoirs of water, known as aquifers, and gushing water destabilised houses,” said Prakash.

He said locals had complained over the last few months about water sources, especially spring water sources, drying up whenever hydropower construction began in the area.

“Since tunnelling work disturbed aquifers, it also affected the water sources connected to it above the ground. It’s a simple logic,” Prakash said.

Going by residents’ complaints, aquifers must have started getting damaged three to four months before the houses started developing cracks, he estimated.

Building work on the same hydropower plant punctured an aquifer in 2009, leading to groundwater loss.

The government has stopped the construction work of the hydropower project. But the state-owned National Thermal Power Corporation, which is constructing the plant, denied that its project is sinking houses in Joshimath.

“No tunnels pass underneath Joshimath, and no blasts were carried out recently,” the power company said in a brief press statement released on January 5.

The company has so far ignored calls for an independent probe or a study to ascertain the possibility of its hydropower tunnelling work causing cracks.

Scientists and engineers have long warned against development in this region.

In 1976, the Mishra Committee set up to probe the sinking of Joshimath town recommended a ban on heavy construction work in the area.

In 2010, two academics wrote an article headlined “disaster looms large over Joshimath”. They warned that “sudden outpouring of water from an aquifer will have multifarious impacts”.

In 2021, the hydropower plant itself was damaged when a glacier broke off, sending a wall of water and rocks down a mountain and  killing more than 200 people. 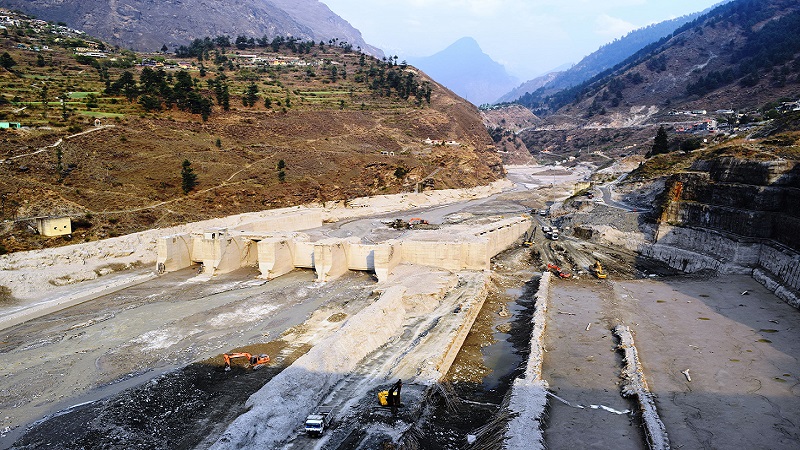 The Tapovan Visnugad hydroelectric power plant after it was damaged in 2021 (Photo: Irfan Rashid, Department of Geoinformatics, University of Kashmir)

In April 2022, a multi-agency report on this disaster recommended that there should be mandatory disaster impact assesments for hydropower projects, which are checked periodically.

Prakash said the government should develop other zero-carbon electricity sources like solar power or small-scale hydropower.

Hydropower plants (blue) are common in the Indian Himalayan states of Uttarkhand and Himachal Pradesh and in the neighbouring nation of Nepal. Coal is in black. (Photo: ResourceWatch)

Facing bitter cold and fearing the collapse of their homes, residents continuously protest against the government’s failure to announce short-term and long-term plans for the sinking town.

“[The government] have shifted us to a tiny hotel room, which is inadequate for my family of four, which includes two teenagers,” laments Parmar, a farmer by profession. “My two-floor home measures around 6,000 sq ft.”

Activists in Joshimath are urging the local administration to formulate a compensation package for people whose houses would be demolished.

People are getting restless as the district administration has failed to come up with a detailed plan to relocate affected families, says Atul Sati, a local activist.

“They are disrupting traffic, protesting and not letting disaster management teams demolish infrastructures that can collapse anytime,” he said. The government should provide monetary compensation and a plan for settlement before the situation becomes explosive.”

He added: “There should be an investigation into the role of NTPC’s project in the Joshimath tragedy. And policy makers and engineers who have put people’s lives in danger should be held accountable for their actions.”