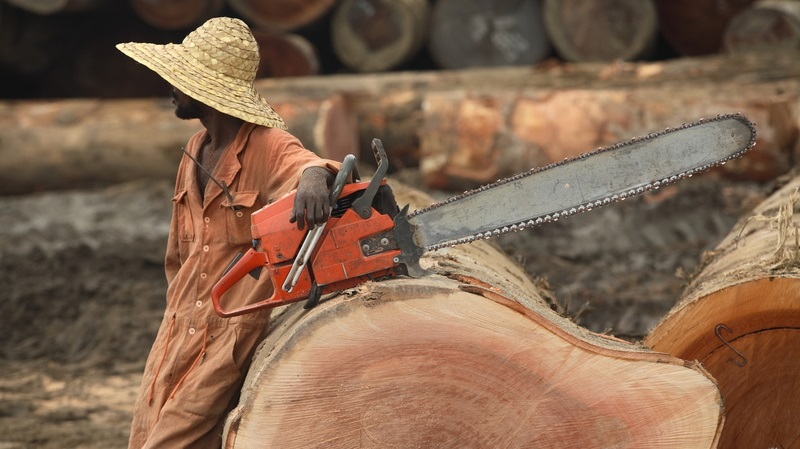 A man stands next to a cut log in DRC. No wrongdoing is implied (Photo: Greenpeace/Kate Davison)

European Union legislators reached an agreement in the early hours of Tuesday to pass a new law guaranteeing that products sold in the EU are not linked to the destruction or degradation of forests.

Between 1990 and 2020, an area larger than the EU was lost to deforestation, according to the UN Food and Agriculture Organisation. EU consumption is a big driver of this, causing around 10% of the losses, according to the FAO.

“The EU is a large consumer and trader of commodities that play a substantial part in deforestation – like beef, cocoa, soy and timber,” said Marian Jurečka the environment minister from the Czech Republic, which negotiated on behalf of the 27 EU countries.

“Protecting the environment around the world, including forests and rainforests, is a common goal for all countries and the EU is ready to take its responsibility,” he added.

The new EU deforestation law will require all companies to issue a due diligence statement in order to sell products like coffee, cocoa and wood on the EU market. Those linked to deforestation will be banned from import and export into the EU.

“It is a text that has a real impact on our daily lives. We’re talking about very concrete items – your morning coffee or your morning chocolate,” said Pascal Canfin, the chairman of the European Parliament’s environment committee.

“The great specificity of this law – and this is a world first for palm oil, cocoa, coffee, beef, and rubber – is the obligation to have a certificate based on satellite images and GPS coordinates to know exactly where the commodity comes from,” Canfin explained.

“When you arrive on the EU’s internal market – at the port of Amsterdam or Le Havre – you must show this certificate. And if you don’t have it, you can’t go in”.

The amount of inspections carried out will depend on the country of production, with the most high-risk countries seeing 9% of operators and traders trading products checked.

The new EU deforestation law was hailed as “groundbreaking” by green campaigners.

“We have made history with this world-first law against deforestation,” said Anke Schulmeister-Oldenhove, Senior Forest Policy Officer at WWF European Policy Office.

“The EU will not only change the rules of the game for consumption within its borders, but will also create a big incentive for other countries fueling deforestation to change their policies,” she said in a statement.

Greenpeace hailed “a major breakthrough for forests,” adding that the new EU law “will make some chainsaws fall silent and stop companies profiting from deforestation.” It regretted, however, that the regulation offers only “flimsy protection for the rights of Indigenous People who pay with their blood to defend nature”.

After just over nine hours, the negotiators agreed that the law will cover a range of commodities, including cattle, cocoa, coffee, palm-oil, soya and wood as well as products that contain, have been fed with or are made using these commodities, such as leather, chocolate and furniture.

The European Parliament successfully widened the scope from the initial proposal, adding rubber, charcoal, printed paper products and certain palm oil derivatives to the list of commodities that require due diligence.

While biodiesel and maize are not included, the European Commission will review whether to add them in the future.

Another win for the European Parliament was to secure a wider definition of forest degradation, which now covers the conversion of primary forests or naturally generating ones to plantation forests.

This definition could also impact EU countries and was a “very bitter pill for the EU Council to swallow,” a parliamentary source told Euractiv following the agreement.

Alongside this, no later than one year after the law comes into force, the European Commission will need to evaluate whether to extend the scope to other wooded land.

And, no later than two years after the directive comes into force, the EU executive will need to look at extending the law to land with high carbon storage and biodiversity value, as well as other commodities.

The European Parliament had been pushing for areas, such as scrublands and savannahs to be covered, but the Council “vehemently opposed” this, said Delara Burkhardt, a German MEP who was in the Parliament’s negotiating team.

“There is thus a danger that agricultural activities will simply switch from now protected forests to still unprotected savannah landscapes, as can already be observed in the South American Cerrado savannah,” warned Burkhardt, who is from the Socialists and Democrats (S&D) political group.

MEPs also succeeded in adding human rights protections. Companies will have to verify compliance with the country of production’s laws, including human rights and the rights of Indigenous Peoples.

However, this relies on the law of the country of production, which can vary in stringency.

One concession from the European Parliament was over the inclusion of financial institutions, which will not be directly obliged to analyse their investments for deforestation risks.

Instead, the European Commission will have to present an assessment two years after the law comes into force, looking at whether existing EU legislation is sufficient to tackle the role of financial institutions, like banks, insurance companies and pension funds, in global deforestation, explained Burkhardt.

Despite the concessions, she told Euractiv that the law sets “a global gold standard for due diligence requirements for deforestation-free supply chains”.

“Against the will of the Council of Ministers and the European forestry lobby, we managed to cover larger forest areas by improving the definition of forest damage. Against the tyre manufacturers’ lobby, we were able to include rubber, a major driver of deforestation, in the regulation. And we were able to strengthen the role of indigenous communities,” she added.

“This important new tool will protect forests globally and cover more commodities and products such as rubber, printed paper and charcoal. Moreover, we ensured that the rights of indigenous people, our first allies in fighting deforestation, are effectively protected,” he said.

The law will enter into force 20 days after its formal adoption by the European Parliament and EU countries, expected next year, but will not apply to big and medium sized companies until 18 months and micro and small companies for 24 months.