Nearly two months on from devastating floods, only $51 million of aid has been delivered, forcing humanitarian groups to make tough decisions 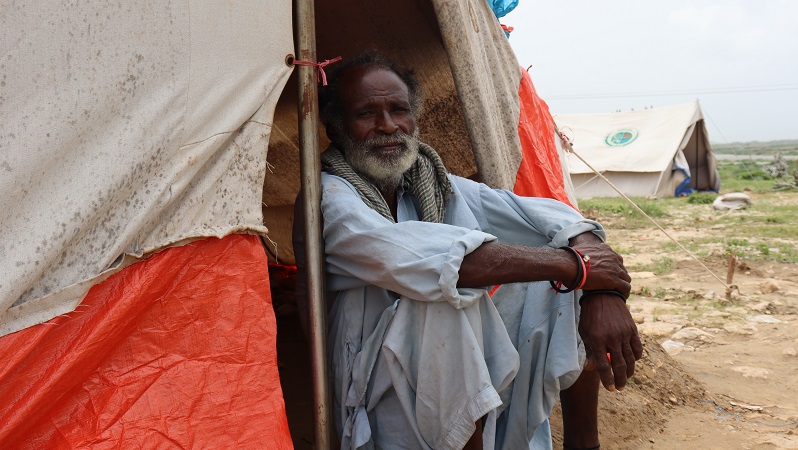 A man whose home has been destroyed shelters in a tent (Photo: Action Against Hunger)

Two months on from devastating, climate change induced floods, millions of Pakistanis are still living on roadsides and struggling for food, shelter and clean drinking water.

But the wealthy nations who bear most responsibility for causing climate change have yet to deliver all the funds they have promised, let alone enough funds to cover the damage done.

Immediately after the floods, Pakistan’s planning minister Ahsan Iqbal said a conservative estimate of the damage done was $10bn. “It is a preliminary estimate likely to be far greater,” he said.

Despite this, Pakistan and the United Nations (UN) put out an appeal on 30 August for just $160m, a figure roughly 60 times smaller than Iqbal’s estimate for damages.

Oxfam's humanitarian lead Magnus Corfixen told Climate Home this figure was low because the UN's assesment "didn't include some of the worst affected districts as they were not hit by the first floods".

Last week, the UN upped its appeal to $816m. “We need all of these funds, and we need them quickly,” said the UN's humanitarian coordinator for Pakistan Julien Harneis.

UN data analysed by Climate Home shows that rich countries have so far failed to deliver even enough aid to meet the UN's original appeal. This data relies on donor countries to report to it so is not comprehensive but it is used by the UN and updated daily.

A UN spokesperson told Climate Home that governments have pledged more than $160m, but the data shows they have only actually delivered $51m. They have signed contracts for a further $39m.

Of this, only $28m comes directly from governments, with $26m of that from the US government.

A further $16m comes from a group of British charities called the Disasters Emergency Committee (DEC), whose funding comes from the government and from ordinary citizens.

The UN's Central Emergency Response Fund (CERF) donated a further $7m. They are funded by governments, mainly in northern Europe, and distribute funds to humanitarian relief as they see fit.

This lack of funding is having an impact on the ground. Gul Wali Khan leads the Catholic Relief Service's response in Pakistan. "It's a couple of months now," he said, "and assistance is not coming to the speed or to the level which is required."

After a recent visit to an affected area, Khan said: "There are 7.9 million people displaced, mostly standing on the road side. On one side it's a sea and the other side it's the sea and the vehicles cross in the middle, so there's not much privacy, not even a latrine available."

Khan said his NGO is prioritising handing out cash, trucking in clean drinking water, building latrines and providing shelter with funds part-provided by the US government. 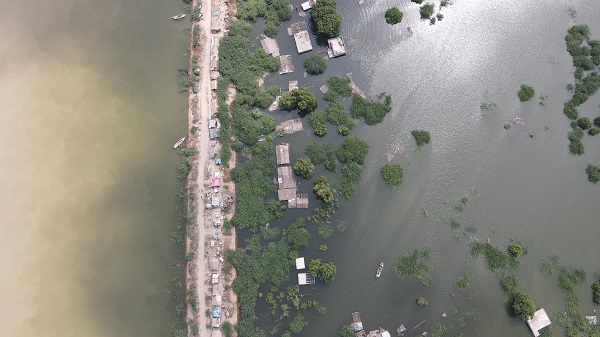 Displaced people take refuge on the roadside in the village of Thatta (Photo: Islamic Relief)

If he had more money, he said he would expand this help to more areas of Pakistan and would try to enable more children to return to school, by fixing the sanitation in flood-damaged schools and by building temporary schools. UN data says no money has been donated for education.

Khan is not the only one making tough choices. A UN report found that "enormous needs" and "extremely limited resources" meant NGOs were having to hand out just one tarpaulin for households to shelter from the sun and rain under rather than two.

The World Food Programme's James Belgrave told Climate Home that the WFP, government and NGOs had assessed hunger across the whole of Pakistan, based on measures like how many people are skipping meals.

They prioritise the areas where hunger is most severe and, he said, "based on how much funding is forthcoming, we'd be able to scale up and provide more food to more people". 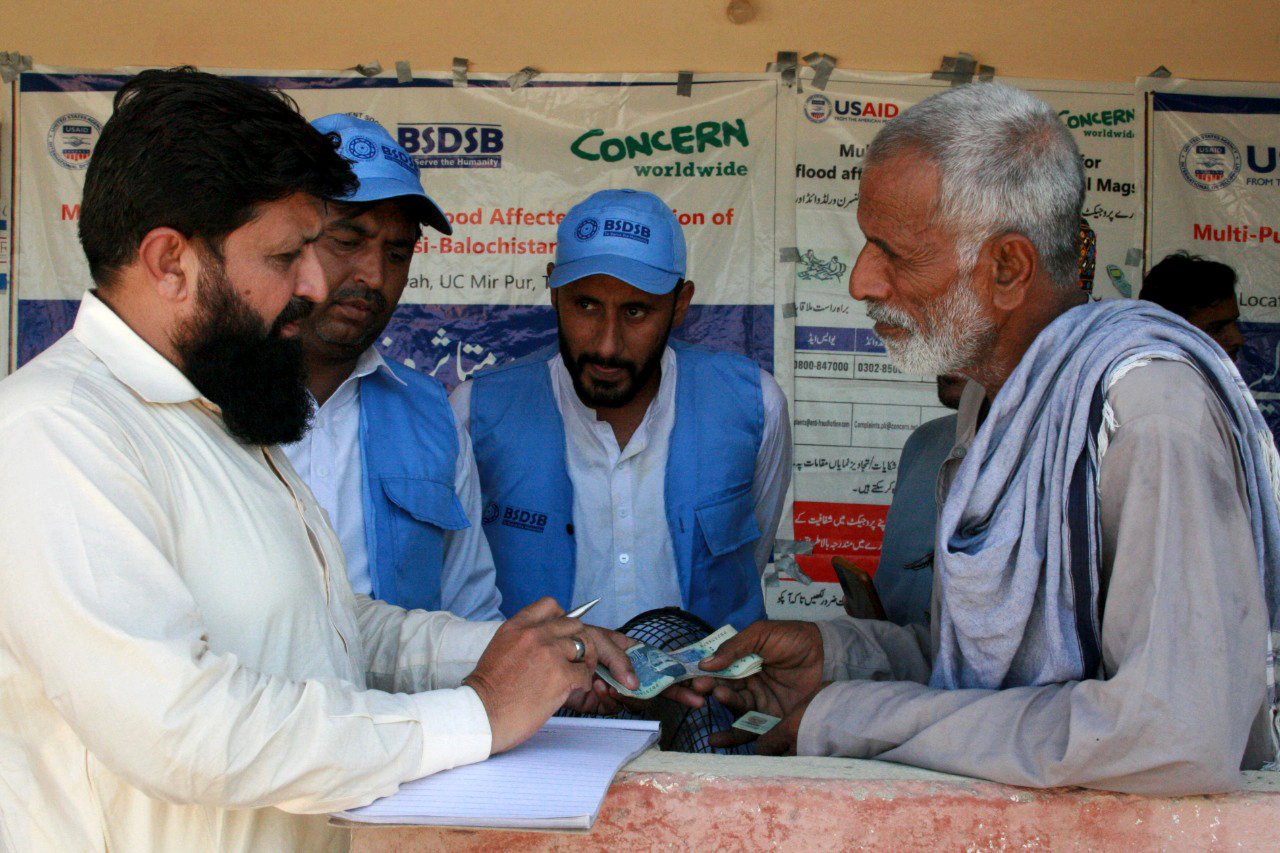 Sherzada Khan is Concern's Pakistan country director. He said his NGO has also had to do some "very unfortunate prioritisation" because the money is "insufficient".

He said the response has focused on giving out cash and, while this kind of "flexible assistance is very welcomed", people need more long-term help.

The floods wrecked many crops which were about to be harvested. If the next harvest is to be a success, farmers need seeds and fertilisers to plant crops in the next few weeks, he said.

With Pakistan being the world's fourth-biggest rice exporter, failure will bump up already high prices globally. 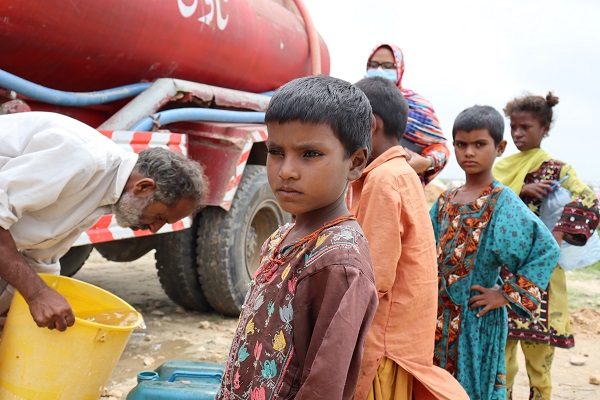 Children fill up water from a truck. (Photo: Action against hunger)

Needs on the ground have grown and changed over the last two months, Khan said.

Water-borne diseases have spread among displaced people and now, with winter coming, respiratory illnesses are likely to rise.

"Winterisation kits", like warm clothes for children, are also now needed as the country cools.

"We understand that [donor governments] will have their own mechanisms and bureaucratic procedures and administrative hurdles...but if you translate the impact of [relief] not hitting the ground timely and efficiently, it’s going to cost a lot more,” said Khan.

None of the humanitarian groups Climate Home spoke to said the slow pace of the donor response was unusual. "Funding for these things can often come fairly slow, it takes a while to trickle in", said Belgrave.

One solution, according to the International Institute for Environment and Development's Clare Shakya, is to scale up the CERF. While the damage caused by disasters has soared, its funding has flat-lined.

Donations to the CERF (Photo: CERF/Screenshot)

"Countries suffering loss and damage as a result of climate impacts that they can’t adapt to, should receive finance ideally in advance of a forecast emergency or at least within days of it happening," she said.

Shakya added that countries should be able to access sovereign insurance for disasters which are likely to happen once in every ten years or so and that Pakistan's lenders should suspend its debt repayments.

Pakistan has pled for debt relief with prime minister Shehbaz Sharif warning "all hell will break loose" without it. But his government dropped this call after credit rating agency Moody's cut its rating, meaning it will have to pay more to borrow.

Climate Action Network's Harjeet Singh said: "The response to Pakistan floods is a clear example of how impacted communities are now at the mercy of individual pledges that may or may not be delivered".

He called for a loss and damage financing facility to be set up, a key demand of many developing nations in climate talks which is set to dominate Cop27 next month.

This would assess the needs after a climate-caused catastrophe and request specific amounts of money from governments based on factors like their contribution to climate change.

A spokesperson for Canada's development minister Harjit Sajjan said that the government was "ensuring that those funds are delivered in a timely manner to enable partners to respond to urgent needs" and "we remain in close contact with our humanitarian partners and continue to look at ways to provide support to the people of Pakistan.”

A spokesperson for the UK's foreign, commonwealth and development office said: “We have committed over £16m ($17.7m) of funding to deliver life-saving aid to those most affected by these devastating floods.” Asked if this includes DEC funding, the spokesperson had not responded at the time of publication.

This article was updated on 14 October to include a table showing pledges made against pledges delivered.