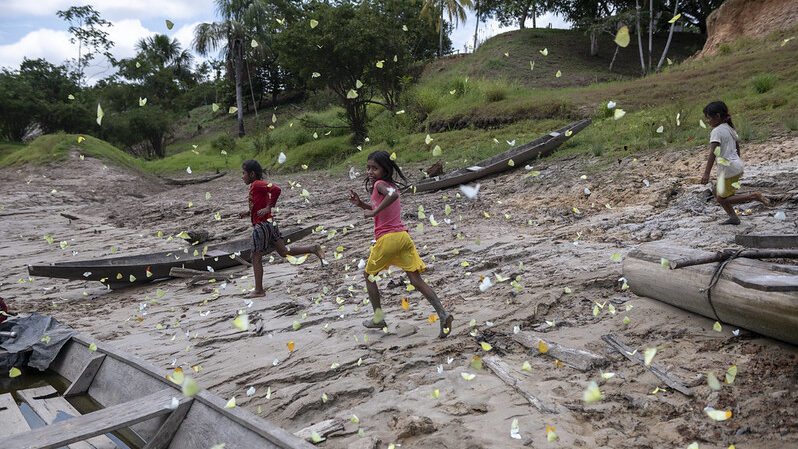 Jair Bolsonaro’s reign as Brazil’s president has seen the greatest reversal of social and environmental protections in our nation’s history.

Since coming to power January 2019, Bolsonaro has led an onslaught against the government agencies and legal frameworks designed to protect forests and Indigenous Peoples’ rights, dragging Brazil back to the wild west days we thought we’d left behind more than two decades ago.

The cost can be measured in environmental destruction and human suffering.

Deforestation in the Amazon has risen more than 50% during his presidency. Violent land conflicts and illegal invasions of Indigenous territories and other protected areas have surged. And a record number of Indigenous People have been murdered.

It’s no exaggeration then, to say that the Amazon’s fate rests on the outcome of our election on 2 October. If Bolsonaro wins another term in office the world’s biggest rainforest could pass its tipping point.

If he loses, we have the chance to bring it – and Brazil – back from the brink.

Bolsonaro lags in the polls behind his main rival, former president Luiz Inácio Lula da Silva. If – as looks likely – Lula is declared president, his government will face a flood of challenges.

Reviving the trade deal that the European Union (EU) struck with the Mercosur bloc of nations – Brazil, Argentina, Paraguay and Uruguay – in 2019, is among them. The deal has potentially negative consequences for Indigenous Peoples’ rights, as well as deforestation in the Amazon, the Cerrado and our other precious biomes.

The trade deal that the EU agreed after 20 years of negotiations would cut tariffs worth billions of euros a year on goods imported into the EU from Brazil and other Mercosur nations. It stalled in 2020 however, partly over concerns it would intensify land seizures and environmental damage from producing more soy and beef. The EU proposed a side letter to the agreement with environmental guarantees, but hasn’t drafted it yet.

Lula has indicated that he wants to reopen talks on the deal, building in more climate, environmental and human rights protections. He also wants concessions from the EU on promoting the development of Brazilian industry. This could appease the industrial workers who are his historical support base. Along with many civil society groups, they have long opposed the EU-Mercosur trade deal.

The new administration must consult Brazil’s grassroots movements and civil society on the deal. Until now, the EU has paid these groups insufficient attention, despite them proving to be such an important pillar of democracy – and a bulwark against its erosion – over the past few years. Their well-founded environmental and social concerns about the deal must be addressed through concrete actions.

The most pressing issue for us is to combat the illegal activity that Bolsonaro allowed to flourish. Under his watch, criminal gangs had a free rein to maraud the Amazon: for mining, fishing, drug trafficking and other nefarious activities.

Those perceived as obstacles to their activities – including Bruno Pereira, Dom Phillips and numerous Indigenous People, such as the forest protector Paulo Paulino Guajajara – paid the ultimate price.

Criminals operate largely with the support of corrupt local authorities. There are now 10,000 kilometres of illegal roads in the Amazon, and guns and violence have proliferated.

Those whose criminal activities have thrived under Bolsonaro are not going to simply stop because there’s a new government in place. What’s more, even if Bolsonaro accepts defeat, he will still have two or three months in office before he hands over power – enough time to wreak more havoc. This could include pushing through a number of damaging bills – including one related to using Indigenous territories for mining, one weakening the environmental licensing regulation and a land grabbing bill – all of which will increase the threat of deforestation in the Amazon, and turn currently illegal activities into legal ones.

In short, the current regime will still have a lot of power, both with their guns on the ground and in Congress.

Despite all this, in Brazilian civil society there is a feeling of hope and pride.

Hope for the democratic future of our country. Pride because Bolsonaro wasn’t able to achieve half of what he wanted, largely due to the resistance and strength of civil society activists and others.

Adriana Ramos coordinates the policy and law program of the Instituto Socioambiental (ISA). She is an NGO representative on the guidance committee of the Amazon Fund and coordinates the Brazilian NGO Forum working group on forests.