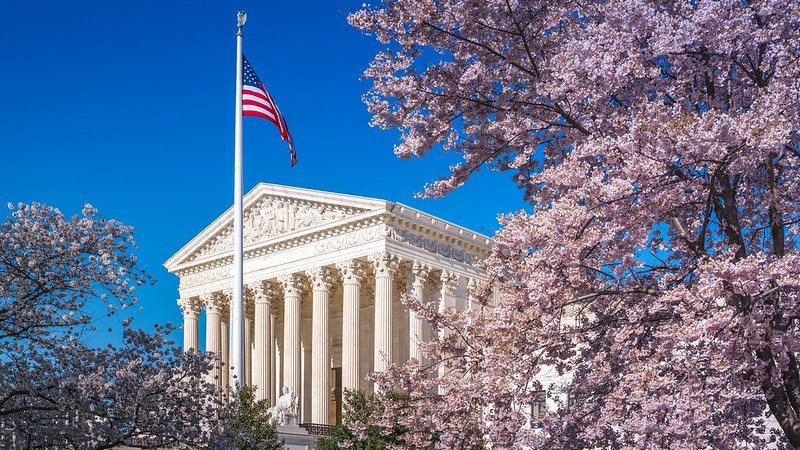 On Thursday, under pressure from climate deniers and the fossil fuel industry, the US Supreme Court limited the government’s ability to reduce greenhouse gas emissions from power plants.

In a case known as West Virginia vs. the Environmental Protection Agency (EPA), the Republican-dominated court said that the EPA, the body tasked with protecting America’s water, air and land, can regulate individual power plant emissions but can’t set emissions standards to shift power generation away from fossil fuels to cleaner sources.

The ruling kills off the Clean Power Plan, a policy proposed by former president Barack Obama to assign each US state a goal to reduce carbon emissions and make them submit a plan for how to it.

The plan was scrapped before it got started by president Donald Trump but a group of climate denier-funded Republican attorneys general, working with fossil fuel companies, challenged it anyway in the hope of preventing similar policies in future.

The Supreme Court, dominated by the ideological right, ruled in the Republicans’ favour, hamstringing the EPA’s powers to drive a nationwide transition away from fossil fuels to generate electricity. Climate analysts agree this will make it much harder for the Biden administration to meet a goal to generate 100% carbon-free electricity by 2035.

While US environmentalists have described the ruling as “a setback” and “a blow”, analysts argue it is not as bad as it could have been and doesn’t change the EPA’s authority to regulate greenhouse gases.

It’s not surprising that with a decision this important, there have been some inaccurate takes floating around. This post from @amyturner about what the Court *didn’t* say is worth keeping in mind. 4/42 https://t.co/ygJnJFElWI

“It does not take EPA out of the game,” responded EPA administrator Michael Regan. President Joe Biden said the ruling “risks damaging our nation’s ability to keep our air clean and combat climate change” but “our fight against climate change must carry forward, and it will”.

Around the world, climate negotiators and observers told Climate Home News of being “disappointed” and saw the ruling as further weakening the US’ credibility on climate action — already damaged by former Republican presidents’ record of backsliding – from George W Bush’s refusal to endorse the Kyoto Protocol to Trump’s withdrawal from the Paris Agreement.

Meanwhile under Biden, a paralyzed legislation process in Congress is not delivering the climate policies needed to meet its goal of at least halving its emissions by 2030, from 2005 levels. Biden has still not managed to pass his Build Back Better act because of opposition from Republicans and fossil-fuel friendly Democratic Senators.

“This shocking decision is unfortunately a reflection of the decades-long influence of the fossil fuel industry on US politics,” said Bill Hare, CEO of Climate Analytics. “This is nothing new to the rest of the world: over the past 30 years there’s been blow after blow delivered, either in terms of failure on the part of Congress to take action, or legal challenges to climate policies.”

“The world is getting tired of this,” added Alden Meyer, senior associate at E3G.

Quamrul Chowdhury, a veteran climate negotiator from Bangladesh, described the ruling as “a negative driving force on president Joe Biden and his climate team”. “Biden needs to do a lot to show his global leadership especially by taking some bold decisions domestically,” he told Climate Home.

Johan Kuylenstierna, chair of the Swedish climate policy council, agreed: “It will most likely have a negative impact on ‘US leadership’ internationally if the the country cannot deliver on set targets at home,” noting the renewed importance of action from sub-national actors including states, cities and corporations.

“Just when the rest of the world thought that the US is ‘back’ on climate leadership, the [Supreme Court] decides otherwise. America is now back [to] the drawing board,” said Esther Tamara, a researcher at the Foreign Policy Community of Indonesia.

Others emphasised that the US’ moral authority and ability to pressure other governments to take bolder climate action has once again been damaged.

“It puts the [Biden] administration in a very weak negotiating position as their attempts to get everyone to increase their ambition will be met with scepticism,” said Carlos Fuller, Belize’s ambassador to the UN and a lead climate negotiator for the Alliance of Small Island States (Aosis).

From China, Greenpeace East Asia advisor Li Shuo, said the ruling “will no doubt be noticed by Beijing and feed into its long-standing perception that significant US federal action is not possible”. That “will further limit the potential of US-China bilateral climate talks, and it only highlights the importance of both countries getting their own house in order,” he said.

Some further fear the ruling will make it harder to argue the case for climate action if the world’s largest historic emitter is unable to embrace policies that accelerate the clean energy transition.

“It weakens our hands in terms of convincing our own authorities throughout the world that they need to remain committed,” said Giza Gaspar Martins, climate negotiator for Angola.

Chia-Wei Chao, chair of Taiwan Environment & Planning Association, said he feared that anti-climate forces in Taiwan, like industry associations, would seize on and exaggerate the ruling to argue against climate action. “We are co-writing an op-ed to explain this decision doesn’t mean the US has dropped out of the climate game again and emphasising the necessity of passing a comprehensive climate law this September,” he said.