Comment: Europe needs low-carbon hydrogen and the Middle-East and North Africa can produce it 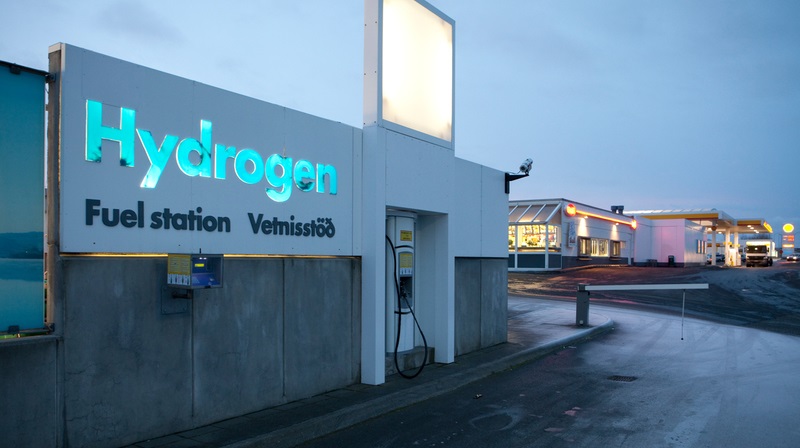 By Magnolia Tovar and Olivia Azadegan

In the past year, the European Commission has laid out its ten year plan for cutting 55% of emissions from the European economy. It has three major pillars.

First, electrification and renewable energy for most consumer needs. Second, a big ramp up of the hydrogen economy to replace fuels used by industry. Third, mechanisms surrounding a high carbon price designed to lessen the economic impacts of the transition for countries and communities that will be most impacted.

None of these pillars are simple to achieve, but the hydrogen segment is the most shaky. The EU has achieved 24% emissions reductions by 2019 compared to 1990 levels, but heavy transport emissions actually increased during that period and industrial decarbonisation efforts have largely plateaued since 2009.

Studies projecting European hydrogen demand vary, but all show massive increases. Even at the low end, there is more than 700% projected growth by 2050. Europe will need as much hydrogen as it can get its hands on. A sizeable amount will be imported as domestic production is unlikely to scale fast enough to meet this rapid increase in demand. 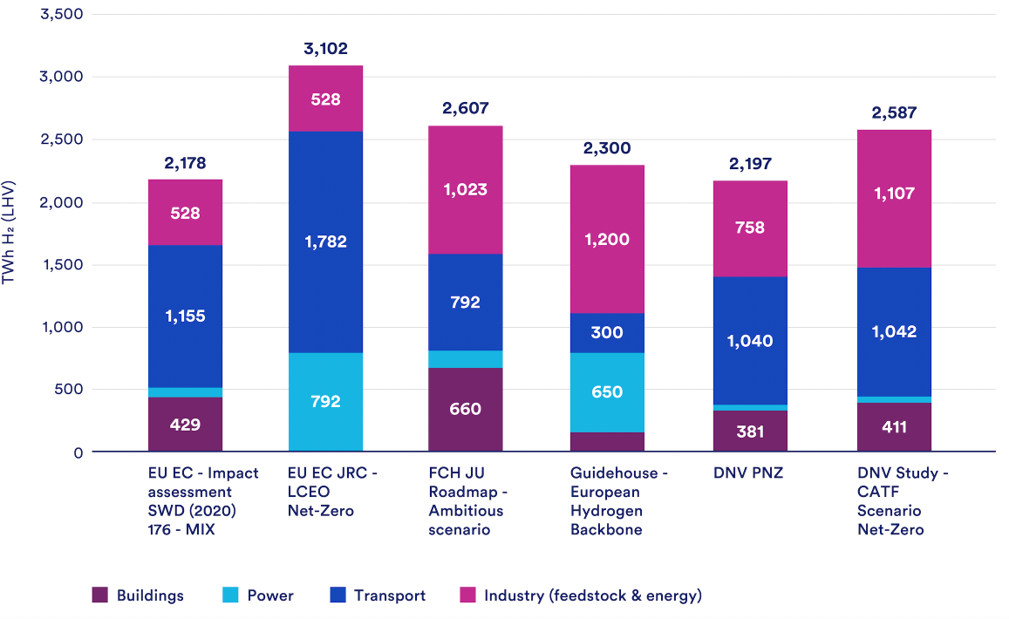 Europe has only seven and a half years to leap from 24% to 55% emissions reductions, so there is absolutely no time to lose.

Fundamentally, difficult-to-electrify sectors – such as heavy industry and heavy transport – will require a new set of  low-carbon fuels like hydrogen and ammonia to replace the fossil fuels in use today, as well as carbon capture and storage (CCS) to eliminate leftover emissions. Hydrogen and ammonia are relatively simple to swap into fuel-focused processes. They contain no carbon molecules, so are considered ‘zero-carbon’ at the point of use.

The major climate challenges come with the production of these fuels.

Upstream emissions and the risks of carbon capture

Within the EU, hydrogen produced by electrolysers powered with renewable energy remains the primary focus. This is a laudable strategy that deserves enthusiastic backing, but it isn’t a quick fix.

Europe is in a race to build renewables fast enough to decarbonise the electricity grid, so may not have the additional renewable electricity needed to produce meaningful volumes of ‘green hydrogen’ in the near term. Europe’s largest port estimates it will be importing 20Mt per year in 2050, more than double Europe’s current total consumption.

There are many challenges associated with the alternative option: producing hydrogen from fossil gas with carbon capture and storage, often referred to as ‘blue hydrogen’.

First and foremost, there is the potential for a significant amount of upstream emissions in the form of methane. Scientists estimate that methane can dominate the emissions associated with blue hydrogen, even at high carbon capture rates, as you can see from the chart below. 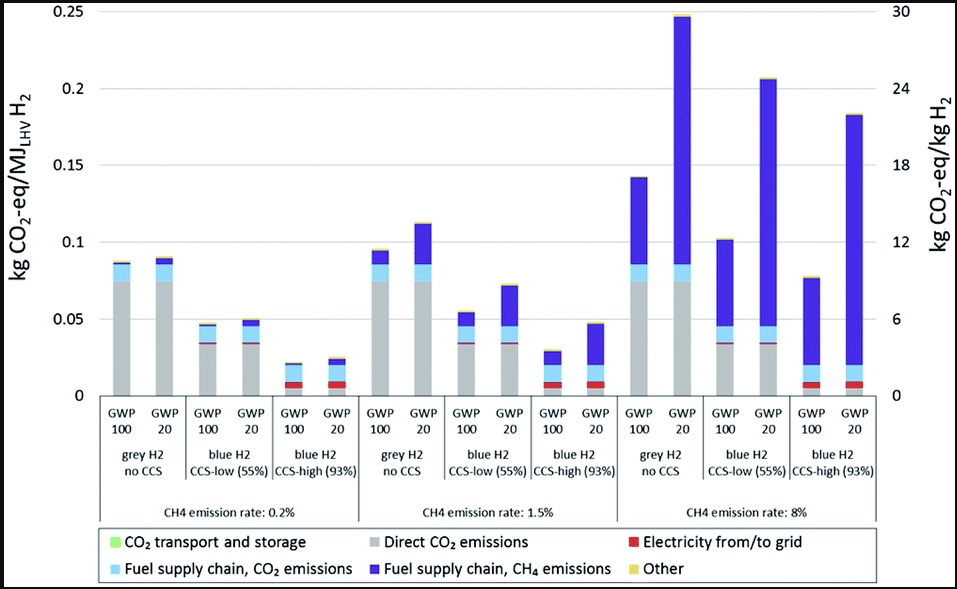 Impacts on climate change associated with the production of natural gas based hydrogen (Photo: Bauer et al/Sustainable Energy and Fuels)

Methane is 80 times more potent than CO2 and is leaked and vented throughout the fossil gas network, as our colleagues at CATF have shown. Cleaning up methane emissions is perhaps the single most pressing climate action of this decade. Happily, leading research shows that significant reductions are attainable with technologies that are already available, at low or negative costs. This has to happen whether or not fossil gas is being used to produce blue hydrogen.

Second, there are inevitable CO2 emissions involved when extracting hydrogen from fossil gas which must be accounted for. To solve this, blue hydrogen plants need to adopt technology that prevents CO2 from entering the atmosphere and then permanently store it in geologic formations.

With much lower methane leak rates and advancing carbon capture units with high capture rates, it is possible to produce hydrogen that results in about an 80% reduction in greenhouse gas emissions compared to directly using fossil fuels.

However, such capture rates have yet to be proven on a large scale. As with any other new climate technology, there are risks that the promised emissions reductions will not materialize, and many groups have resisted attempts to bring CCS into the technology mix because of said risks.

This links to a major reason we are yet to see such capture rates at scale: we haven’t really tried it yet.

Just 0.6% of the fossil fuel derived hydrogen produced today is done using carbon capture technology. Without policy pressure to increase the production of low-carbon hydrogen, producers have no reason to cut the emissions for the ‘grey’ hydrogen produced from fossil fuels which we overwhelmingly use today.

Where the European Union needs to take action

Getting to scale is a huge concern when it comes to the low-carbon hydrogen economy.

The EU’s climate chief Frans Timmermans recently stated that “Europe is never going to be capable of producing its own hydrogen in sufficient quantities” in a speech aimed at potential low-carbon fuel producers in neighbourhood countries.

A combination of blue and green hydrogen is likely necessary to meet European and global hydrogen demand at least up until mid-century – the IEA’s flagship Net Zero by 2050 report shows a 62/38 percent split between the two even in 2050.

However, hydrogen can only be considered a viable option for Europe with appropriate climate controls such as strong methane management and significant carbon capture and storage.

To an extent, this is already reflected in European policy. The term ‘low-carbon hydrogen’ is included in the EU’s Hydrogen Strategy and the Gas Package, but the details are lacking. It’s crucial that the Gas Package, in particular, lays out the terms to ensure that hydrogen imports will be climate beneficial.

There is currently no certification system in place for low-carbon hydrogen and the Commission is only planning to introduce one in 2024. That’s far too late. Many member states have already secured import deals and are in the process of adopting their own schemes, which will inevitably lead to confusion among producers. Furthermore, these certification schemes fail to take into account adequate life-cycle analyses, ignoring upstream and transport-related emissions which must be addressed. The EU must step in.

The lack of clarity has delayed investment from potential hydrogen producers in the Middle East and North Africa. These are countries that have long been energy partners with Europe and possess knowhow and resources to ramp up much needed hydrogen production, but they are under the impression that only green hydrogen will be accepted by importers in Europe. Producing blue hydrogen means significant infrastructure investments – these will not happen overnight.

The longer Europe takes to lay out its vision for hydrogen imports, the longer it will take for both regions to transition away from the status quo of continued extraction, transport and consumption of unabated fossil fuels.

As the EU builds new energy relationships around the world, it must seek win-win solutions that address the scale and speed needed to hit climate goals, while also addressing energy security challenges.