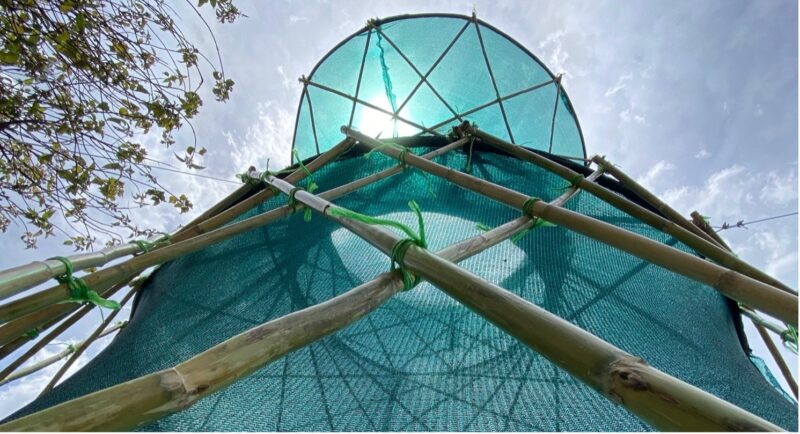 A Mexican climate resilience project is adopting the traditional practice of fog catching to address the impacts of water scarcity.

Using fine mesh that has a high capacity for moisture absorption, the structure retains water particles during foggy nights which, when condensed, falls into a central trough connected to a reservoir container.

Driven by the indigenous community, the technique is just one of a number of ancestral methods the project is harnessing to combat climate change vulnerability in the state of Oaxaca.

The region, located between the Pacific Ocean and the Gulf of Mexico, sits between two tropical cyclone basins, and 83% of its 570 municipalities are at high risk of extreme hydrometeorological events, namely drought and frost.

Capacity to deal with these impacts is exacerbated by a significant rate of marginalised and scattered communities, many with their own native languages, making it difficult for the population to access information related to the increasing weather anomalies.

The fog catching technique aims to help relieve some of the burdens caused by water stress.

Originally established in Peru, the structures can capture three to five litres of water per square metre a night, depending on the humidity of the area. The water’s main function is to feed into canals and reservoirs for wildlife during droughts, and ladder-like net structures have been put in place to avoid the likelihood of animals falling into the waterways.

Another ancestral technique, known as Waru Waru, is being revived across the region to protect crops from freezing during frost events.

The system works by surrounding raised agricultural beds with a network of embankments and watercourses which, as a result of enhanced moisture levels, retains thermal energy and protects the soils from frost.

“We are the only organisation in Oaxaca that is rescuing the Waru Waru technique and using fog catchers,” said Tzinnia Carranza, the project’s lead who works at executing entity Espacio de Encuentro de las Culturas Originarias. “Until now there were no viable alternatives to counteract the loss of crops due to frost, so this mixed technology is an innovative, viable, replicable and low-cost alternative.”

The practices date back to pre-Hispanic times and are used to this day by indigenous communities that have preserved and disseminated their solutions.

The project has been made possible by the Adaptation Fund Climate Innovation Accelerator (AFCIA), which is a $20 million partnership first launched a few years ago by the Fund, the United Nations Development Programme (UNDP), UN Environment Programme, Climate Technology Centre and Network and the European Union. This April AFCIA announced the awarding of the first round of $2.2 million in grants funded by the Adaptation Fund and implemented by UNDP for 22 local innovation in adaptation projects across 19 countries. The Oaxaca project is one of them.

Other awardee projects include the establishment of dry season gardens across rural villages in Ghana and the introduction of locally appropriate food and food processing techniques in Micronesia.

“Innovation is critical to accelerating adaptation and obtaining better solutions and, in turn, is the way to have more impact with the extremely limited public finance dedicated to adaptation to climate change,” said Saliha Dobardzic, senior climate change specialist who coordinates the Adaptation Fund’s Innovation programme.

“Innovation is a way to approach an enormous challenge, and to look at societal challenges as opportunities – to make a big change, for the better,” she added.

One of the unique aspects of AFCIA is that grants are open to a wide range of implementers operating in developing countries, from NGOs, young entrepreneurs, the private sector and local governments, to name a few, which is hoped further increases the potential for innovative approaches to adaptation. Identifying the local adaptation need before innovating an appropriate solution is crucial.

“The Adaptation Fund has always been an innovative fund by its nature, in piloting often the first adaptation projects on the ground in many places that are also scalable, to pioneering Direct Access to empower countries and vulnerable groups to build their own capacities to adapt to climate change,” said Mikko Ollikainen, Head of the Adaptation Fund.

“AFCIA takes innovation another step forward, by opening the door to more risk-taking and localised solutions to develop an even broader knowledge base of what works effectively in adaptation and help further respond to the urgency of the climate crisis.”

“To build true resilience and foster innovation and scalable transformative approaches from the ground up, we need to connect the dots between land-use, agriculture, livelihoods; natural resources, economic growth and social development; and between disaster risk reduction, climate services and adaptation,” said Charles Chongguang Yu, a climate finance and investment specialist at UNDP.

“First and foremost, we need to ensure these actions protect our people and our planet from the existential risks of the climate crisis and foster resilience from the ground up.”