Arshak Makichyan has been a vocal climate and anti-war activist in Moscow. Russian authorities are accusing him of having illegally obtained his citizenship 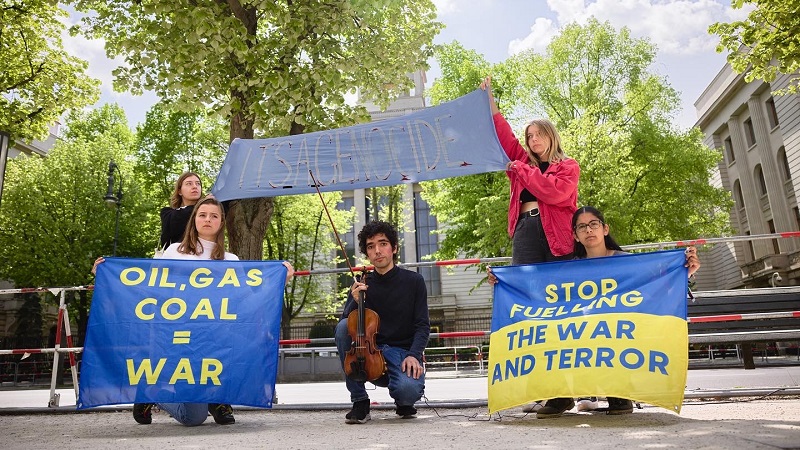 Arshak Makichyan, center, during a protest in Berlin, Germany, calling for an embargo on Russian fossil fuels (Photo: Lukas Startmann)

A Russian climate activist and anti-war protester is at risk of losing his citizenship after prosecutors filed a case against him which lawyers have described as “absurd” and “politically motivated”.

Arshak Makichyan, 28, became Russia’s most visible climate activist after he embarked on solo protests in Moscow’s Pushkin Square with a sign that read “Strike for climate”, inspired by Swedish youth activist Greta Thunberg.

But the risks Makichyan was taking were far greater than youth activists in Europe.

At the end of 2019, he was arrested and sentenced to six days in prison for taking part in a demonstration without permission. Individual protests are lawful in Russia but anything bigger requires police permission.

After Vladimir Putin ordered the invasion of Ukraine in February, Makichyan turned his energy into calling out Russia’s brutal war. As the crackdown against Kremlin critics intensified, he left Russia for Berlin in Germany.

Now, prosecutors in the Moscow region are accusing him of illegally becoming a Russian citizen  and are seeking to remove his sole citizenship in a case which opened on Thursday.

“They want to cancel my citizenship because of my activism,” he said in a video posted on social media, describing the case as “impossible”. “But they can’t silence me,” he added.

My name is Arshak.
I am 28 in years old. For 27 of those years, I have lived in Russia. I graduated from school, and then from the Moscow Conservatory. My wife is Russian. 1/8 pic.twitter.com/tQQ3Lv66co

Makichyan was born in Armenia, a former republic of the Soviet Union, and moved to Russia with his family in the mid-1990s when he was one year old.

At the time, people who arrived in Russia from former Soviet Union countries were granted a residency permit. He became a Russian citizen in 2004.

“I thought it was impossible to cancel my citizenship because I don’t have any other,” he told Climate Home.

The case against him could leave him stateless and make it much more difficult for him to return to Russia.

In a letter outlining the charges, seen by Climate Home News, prosecutors in the city of Shatura, east of Moscow, claim that the migration services lost some of his files and therefore cannot prove his citizenship application was done according to the law.

In a second charge, they claim his request for citizenship in 2004 was made using “false” documents, namely that he allegedly did not live at the address mentioned on his application.

The letter states that an inspection of the house carried out at the start of May deemed it to be “unsuitable for living” and that no-one had ever lived there.

“These arguments are insane,” lawyer Olga Podoplelova who is representing Makichyan in court on behalf of the Russian human rights project The First Department, told Climate Home.

Podoplelova said the accusations were “unfounded” and that all due process was followed in Makichyan’s application for citizenship.

“This is such an absurd case that in a normal jurisdiction we would not face such accusations. There are indications that this case is being politically motivated,” she told Climate Home.

A music graduate from Moscow’s Conservatory, Makichyan has dedicated his life to his activism.

His efforts to build a climate movement in Russia despite the country’s prohibitive anti-demonstration laws have led to him being detained several times.

“We were the first climate movement in Russia and we built this climate awareness from almost nothing,” he told Climate Home.

On 24 February, the day Russia launched its invasion of Ukraine, Makichyan married fellow Russian activist Polina Oleinikova “for political reasons”. If one of them was arrested and sent to prison, the other would be allowed to visit, he explained. “Fuck the war” was written in red ink on the back of his white shirt.

“If you are doing activism in Russia you should be prepared to go to prison,” he said, adding: “We couldn’t even celebrate because we went straight to an anti-war protest.” 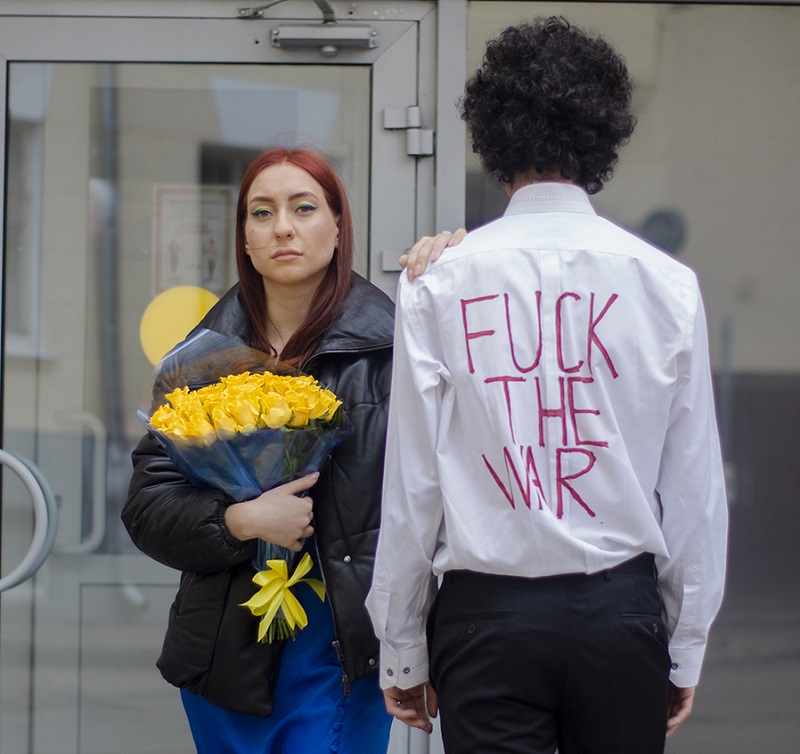 The next day, Oleinikova was arrested and detained for preparing an anti-war action.

In the weeks that followed, Makichyan continued to organise anti-war protests and spread information about Russian atrocities in Ukraine.

“I was trying to be useful for the country and for everyone,” he said.

He called for an embargo on all Russian fossil fuels, describing European sanctions on Russian coal and oil as “far from nearly enough” for failing to cover gas. Since the war started, the EU has paid Russia an estimated €60bn ($64bn) for fossil fuel imports.

“They are continuing to finance this terrible regime and have been doing so for years while Russia’s civil society is oppressed,” he said.

In the face of growing oppression against those daring to speak out, the couple decided to leave the country for some time and travelled to Germany.

In Berlin, Makichyan doesn’t know what the future holds. The next hearing in his case is scheduled for 27 June. His visa to Germany expires at the end of the month.

In Europe, “I don’t think I am a danger [to Putin]. I am not Navalny,” he said in reference to the Russian opposition leader who was poisoned in August 2020.

Makichyan said he believes his case is being used to “scare” and “intimidate” other non-Russian-born Russians and prevent them speaking against Putin’s war on Ukraine.

“I am very grateful to everyone who is not silent in these difficult days,” he said.