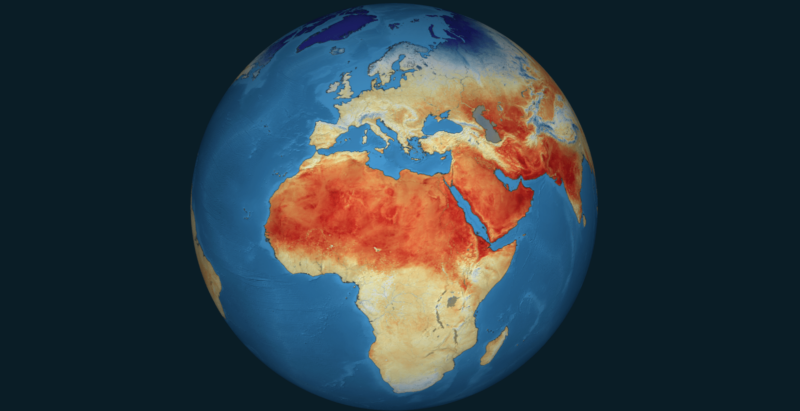 The records, developed by the Climate Change Initiative at the European Space Agency, are the most up-to-date observations of such variables and will be used to gain a more comprehensive understanding of environmental change.

“LST is integral to a radiative energy budget of the surface, and it provides the best approximation to the thermodynamic temperature that drives the surface energy,” says Dr Darren Ghent, who leads the research.

Although satellite-derived temperature analysis is well established, the new datasets provide the first climate record of LST for both infrared and microwave sensors at a global scale.

This greatly increases our ability to monitor climate change as satellites observe the whole Earth every day, whereas the coverage of temperature records from ground-based meteorological stations is very patchy in comparison, particularly in polar regions where climate change is happening very quickly and in developing countries where the vulnerability of local populations can be relatively high.

Spanning the last 25 years, the records show a stable increase in land surface temperature (LST) of 0.2C per decade, although there is a considerable regional variability within this.

The datasets are accompanied by an an objective assessment of their accuracy and have been fully validated for consistency and stability to ensure they are suitable for climate trend analysis.

“The records can be applied to our understanding of urban heat islands and urban planning to map and henceforth mitigate heat stress,” says Ghent, “and we can distribute these findings to decision makers at the national and local level to address issues like vulnerability, urbanisation, and green space designation.”

Other applications for the LST data include agricultural and water management, tracking geothermal anomalies, and monitoring changes in the cryosphere.

Researchers found an overall increase in total column water vapour – the amount of water in a vertical column – between 2002-2017, over oceans and land.  As the climate warms, more evaporation leads to higher concentrations of water vapour in the atmosphere.  But water vapour is a strong greenhouse gas, so this in turn amplifies the original warming, resulting in an important positive feedback.

“Water vapour is a key component of the water cycle of the Earth and strongly impacts our climate directly through absorption and with this bringing mean temperatures into a more comfortable level for humans and indirectly through strong feedback mechanisms,” says Marc Schröder, the project’s scientific lead.

Changes over the ocean, the researchers say, are close to what is expected and in line with sea surface temperature, but the observed increase in water vapour over land would need further analysis in a future effort to understand the implications to overall climate changes.

“Intended user groups include climate analysis, climate services, model evaluation and assimilation, process studies, and others,” Schröder explains, adding that “in particular the high spatial resolution is a unique feature and of relevance for these applications.”

ESA points to climate variability such as the El Niño-Southern Oscillation to explain increased trends observed in both variables.

The data is available on the CCI Open Data Portal.