Sponsored content: The project aims to improve and promote the adoption of climate-smart agriculture in the African island nation 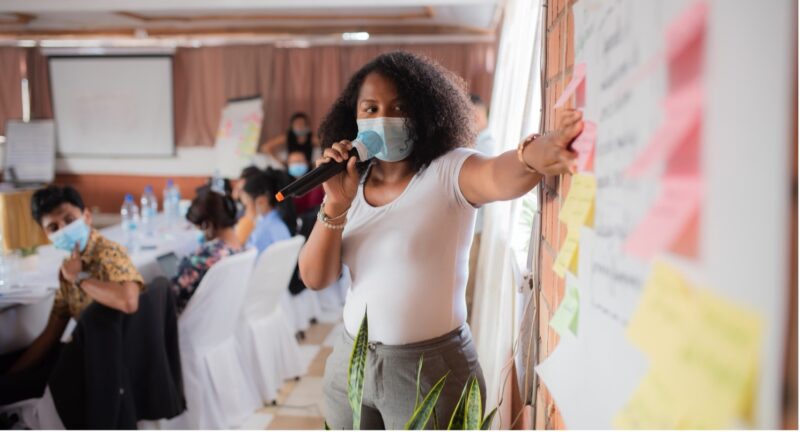 A workshop on the status of Madagascar’s climate-smart agriculture (Photo: ESSA-Forêts)

A global adaptation micro-grant initiative is supporting a project which aims to transform climate-smart agricultural techniques in Madagascar.

As part of its goal to empower those at the frontlines of climate change, the Adaptation Research Alliance (ARA) funding programme has awarded a total of 25 grants to projects at the intersection of adaptation research and action in developing countries of Africa, Asia and the Pacific, and Latin America and the Caribbean.

The Madagascar project is a collaborative effort between Ecole Supérieure des Sciences Agronomiques (ESSA-Forêts) and the University of Antananarivo. Since March, its members have been consulting with stakeholders and collecting local knowledge which they plan to collate and ultimately use as key policy advice for the national strategy in scaling up the adoption of climate-smart agriculture (CSA) practices.

The country is increasingly vulnerable to the impacts of climate change putting intense pressures on the agricultural system, causing chronic food insecurity and poverty. This, as well as high rates of deforestation, exemplifies Madagascar’s need for transformative approaches in its agricultural system – which CSA can offer.

“Such scaling up is of critical importance for achieving real impacts beyond the site level and improving food security, climate resilience, and sustainable management of forests and natural resources in Madagascar, especially among small-scale farmers at the forest frontier,” she added.

The project has relied on local and expert testimony, holding hundreds of interviews and focus groups with farmers living in remote villages, and consulting researchers, practitioners, and government officials.

Data collection culminated in a one-day national workshop in Antananarivo, Madagascar’s capital, which provided a platform for exchanging experiences and reflections on policy instruments to support the agroecological transition of rural communities.

“These activities will provide critical reflections and key policy recommendations on the most effective policy instruments to support the agroecological transition of rural communities around protected areas and will ultimately pave the way for more resilient farming communities, improved food security and welfare, and the mitigation of greenhouse gas emission,” said Rakotonarivo.

Projects across ARA’s micro-grant award pool have provided the alliance with similar insights.

“From a knowledge perspective, we wanted to use the micro-grants to gain a greater understanding of the knowledge needs for action,” said Julio Araujo, manager of the micro-grant initiative.

“We also wanted to understand the role of collaboration between knowledge and action and how this greater collaboration can lead to co-developed solutions,” he added.

The grants ultimately act as a vehicle for the ARA to draw closer to its overarching goals and themes; action-oriented research, increased funding in developing countries, capacity building, strengthened collaboration, and empowering local knowledge.

“We expect the micro-grants to deliver new and more relevant knowledge on the local issues, and to generate potential solutions,” Araujo said.

“This knowledge can also be used to support local decision-making around adaptation and can be used to influence the direction or emergence of new adaptation projects. This is particularly valuable because the issues and solutions that are identified are truly local: they emerged from the people where the issues are actually being felt and where the solutions will be implemented.”