No red alert was issued ahead of deadly South African floods

Experts say a communication breakdown, poor housing and inadequate infrastructure contributed to a death toll from extreme rainfall of 300 and rising 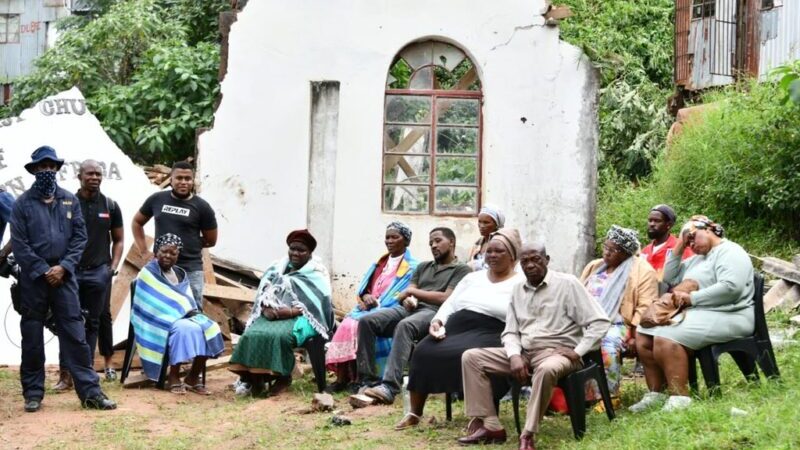 By Isabelle Gerretsen and Chloé Farand

A communication breakdown, inadequate infrastructure and housing in informal settlements contributed to a high death toll from devastating floods around the South African port city of Durban, experts say.

The heaviest rains in decades pummeled the KwaZulu-Natal province, killing more than 300 people and causing billions of rand worth of damages to properties and infrastructure.

Torrential rainfall caused mudslides which trapped people under buildings, with officials describing the event as “one of the worst weather storms in the history of our country.” President Cyril Ramaphosa said the flooding was “a catastrophe of enormous proportions”.

“First indications are that about one month of average rainfall occurred over one or two days,” Mark New, director of the African Climate and Development Initiative (ACDI) at the University of Cape Town (UCT), told Climate Home News.

“After detailed analysis, I wouldn’t be surprised if this turned out to be a one-in-a-hundred-year event, or even rarer,” New said.

But the authorities have questions to answer over the province’s preparedness for such an extreme event.

The South African Weather Service forecast the flooding over 24 hours in advance, but did not issue a red alert. On Monday evening they raised an orange warning, indicating a medium likelihood of severe impacts, including loss of life.

“The impact is likely an order of magnitude higher than it should have been had sufficient effort and resources been effectively directed towards upgrading informal settlements and improving management of rivers,” Jack said. “Improved disaster risk management doesn’t have to cost a lot, it just requires better coordination.”

“It’s the poor and disadvantaged that are carrying the heaviest load in terms of climate impacts,” Roberts told scientists and policymakers at the Royal Society London on Monday by video link from Durban.

Insurance is one way for communities to recover from severe flooding, but Roberts said people living in informal settlements do not have access to this. “They literally lost everything. They will experience a loss in living standards. Many have lost absolutely all the material goods that they have in this world including their house today,” she said.

IPCC: US seeks to remove ‘losses and damages’ from scientific report on climate impacts

Gina Ziervogel, associate professor in the department of environmental science at the University of Cape Town, said high levels of poverty in South Africa undermine the country’s ability to withstand climate shocks.

“Adapting to climate does require improving early warning systems and infrastructure to withstand extreme events. But it also requires addressing inequality and capacity more broadly to deal better with multiple shocks,” she said.

Francois Engelbrecht, director and professor of climatology at the University of the Witwatersrand, told Climate Home News that a very similar flooding event occurred three years ago, causing severe mudslides which killed 70 people in the province.

“The 2019 event should have been a clear warning to the provincial and national governments, about how vulnerable communities in the province are to flash floods and mudslides,” he said.  “As long as we have communities in South Africa living in areas below the flood line, or along steep hillsides where mudslides occur, the hard reality is that we will see more lives being lost during extreme rainfall events.”

The IPCC’s sixth assessment report warned that rising temperatures will increase the frequency and the intensity of heavy rainfall and flooding in southeastern Africa, as well as the wind speeds of tropical storms and the proportion of category 4-5 cyclones.

Climate change made extreme rainfall during a series of major storms in Madagascar, Malawi and Mozambique this year heavier and more frequent, according to analysis from World Weather Attribution. The region was hit by three cyclones and two tropical storms in six weeks.

“The rainfall associated with such storms has become more likely and more intense,” Dr Friederike Otto from Imperial College London said. “What we can say for sure is, the damages of such storms have become worse.”

The South African Weather Service and provincial government did not respond to Climate Home’s request for comment.