Sponsored content: Doc Society and Aywaa Storyhouse amplify the voices of people on the front line of climate impacts 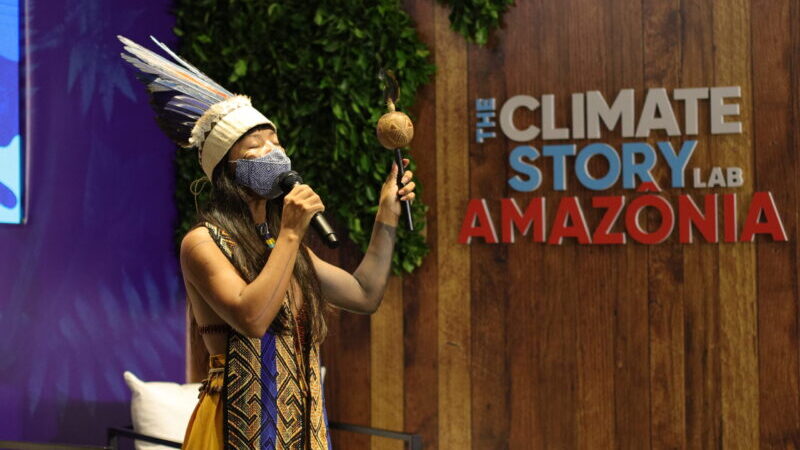 “Indigenous storytellers have the lived experiences, they have the stories, and they also have their own way of telling these stories and offering solutions,” said Vanessa Cuervo Forero.

Cuervo Forero is the director of Latin American programs for Doc Society, an organisation that partners with filmmakers to support the creation and distribution of documentary films to global audiences. According to the nonprofit, Indigenous storytellers face issues related to production, distribution, and lack of access to financial and technical resources when attempting to share their stories and add to the larger conversation around climate action. In the inaugural year of the Climate Story Unit, Doc Society granted over $1 million to storytellers working on climate themed stories and impact campaigns around the globe.

Part of their work means advancing a climate-just future through transformative storytelling. As a result, Doc Society, through their Climate Story Unit, centres the narratives of Indigenous Peoples with a goal for those stories to shape actions and policies.

“Indigenous voices have been on the front lines of climate justice for decades. Their fight goes beyond when climate justice became more mainstream,” said Cuervo Forero.

Some of Doc Society’s efforts to inspire transformational change is done through their Climate Story Labs (CSL) program. CSL seeks to move past the monoculture of traditional climate narratives by fostering the creation of great stories in order to shift narratives and generate change. Part of CSL’s efforts involves bringing together members of civil society and government agencies, including policymakers, academia, and scientists to learn from frontline climate filmmakers.

CSL is particularly interested in elevating Indigenous storytellers and knowledge. The CSL workshops, also known as labs, are designed to support and catalyse climate-based media projects to drive impact. These labs offer media project leads the chance to showcase their films, podcasts, and other media projects, and receive impact-driven feedback from other creative professionals in the room. The labs have been based in different locations across the globe, including Mexico, Amazonia, Africa, and the US South.

“We’re inspired by the need to create biodiversity in storytelling,” says Emily Wanja, global community manager of the Climate Story Unit for Doc Society. “Our stories should represent all people who are being affected, especially communities at the front lines of climate change.”

An online platform, called the Aywaa Storyhouse, also points to the transformative power of Indigenous oratory, dialogue, and expression. Launched in 2020 as a project of the Alaska Venture Fund (AVF), Aywaa (which is the root word for north wind in the Yupik language), shares the cultural narrative of Alaska’s Indigenous Peoples. Jonella Larson White, a partner at AVF, led the creation and launch of Aywaa. She said the project also aims to increase attention to existing and emergent opportunities for philanthropic entities to learn from.

“There’s an important role in continuing to educate people,” said Larson White. “The message is really that Indigenous Peoples of the North have responsibility to help shape the climate story and agenda and the rest of humanity not only has a responsibility but an incredible opportunity to listen and learn from us.”

Supporting storytelling is a crucial part of supporting Indigenous solutions and knowledge. As Doc Society and AVF illustrate, the rest of the world has much to learn from Indigenous peoples of examples of living in relationship with the land and environment for millennia, stories, and perspectives as many communities tap a deep well of cultural knowledge to adapt to climate change.

Moreover, by providing support for AVF and Doc Society’s Indigenous storytelling efforts, CJRF is helping to amplify how communities are tackling complex local and global vulnerabilities. Both AVF and Doc Society are elevating climate-related stories that can inform solutions to this crisis.

“Doc Society is communicating climate change so that it results in climate action,” Wanja shared. “We want to inspire different groups around the world to do their best to act on these issues.”

“Aywaa recognises that the people who have the answers and the people who really can address these challenges – whether it’s related to climate or food security – are the ones in the Indigenous community,” said Larson White.