‘They put a gun to my head’: Colombian anti-fracking activist tells of ordeal

In an exclusive interview with Climate Home, 21-year-old Yuvelis Natalia Morales speaks out on the activism that nearly cost her her life 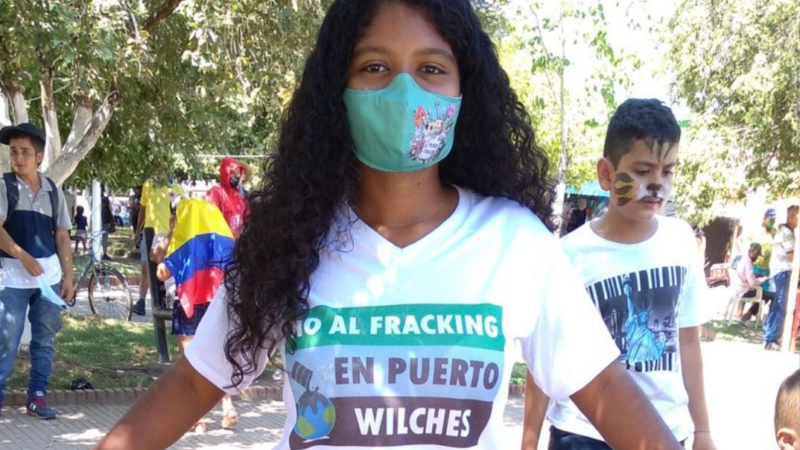 By Patrick Galey and Julia Marques

When Yuvelis Natalia Morales decided to found a youth activist group protesting fracking projects in Colombia, she had little idea she was joining a war between preservation and profit that threatens to tear her homeland apart.

From Puerto Wilches, a town on the Magdalena River in Colombia’s northern Santander province, Morales grew up on the doorstep of one of the most pristine natural habitats on Earth.

“This area is possibly the most biodiverse in Colombia, where there’s the most water, most animals, and most green zones,” she said. “And it’s also the area with the most armed militias.”

Despite relatively small reserves, Colombia is heavily reliant on oil revenue. Although fracking was outlawed nationally in 2018, the ban does not cover pilot projects.

When, in 2020, a legal bid to block those projects failed, Colombia’s National Hydrocarbon Agency (ANH) assured environmental groups that the pilots would only be allowed in two regions: the Cesar-Ranchería Basins in the country’s extreme north and the Middle Magdalena Valley, where Puerto Wilches sits.

Local energy company Ecopetrol began its pilot in the Magdalena Valley in late 2020. “They started doing this like they were running a race,” says Morales, now 21.

“They started approving things day after day. There wasn’t time for anyone, for the community, to do anything. Everything started happening very fast.”

“This committee is quite special and is very important in Colombia as it’s a youth committee. We are all between 18 and 25 years old,” Morales tells Climate Home.

“Once we started organizing, they started to threaten us.”

Morales says that she was first threatened publicly by local officials during a debate in Puerto Wilches. But she persisted, helping in December 2020 to organise a carnival march where at least 3,000 people protested against the projects.

“This was a milestone because normally this doesn’t happen as people are very afraid,” she says.

“However, we did it and people went into the streets to say we don’t want fracking in our territories, that this is bad politics.”

After the march, the threats began to come more frequently.

“They would call our phones, come to our houses, threaten our parents, saying they would take away their jobs,” Morales says. “They started to persecute them, calling them ‘guerrillas’.  In Colombia, when they label you a guerrilla, this means death.”

Colombia: Fishers are fighting for their rights and protection of vital wetlands

Morales says she had a member of the army contact her with a warning: “Why are you getting involved with this fucking fracking? They are only going to kill you.”

Morales fled her home, first to the capital Bogota, then out of the country.

According to Global Witness, Colombia is the world’s most dangerous country for environmental activists, with 65 killings of land defenders recorded in 2020. In April 2021, Peace Brigades International Colombia said that members of Aguawil and other environmental groups had been subject “to death threats, assassination attempts, forced displacements, and gender violence”.

Morales stresses that she did not know which organisation the people who threatened her were acting on behalf of, but says her attempts to report the intimidation to the authorities fell on deaf ears.

“They never tell you anything,” she says. “I wanted them to investigate but they never did.”

Once she reached safety, Morales connected with other national and international anti-fracking organisations. She says doing so made her realise that her case was far from isolated.

“This is very serious because at the time I was 20 and there were others who were only 17,” she says.

“We learnt that there are many children from certain areas who are against fracking, who they are threatening with death and labeling as guerrillas and who, like me, are having to flee their homes and countries because with the threat of fracking comes the threat of death.

“Protesting fracking in Colombia is like putting a bullet in your head, at any moment they could kill you, just like what almost happened to me,” says Morales. “It’s really bad there.”

“And this is why there are many others who have also had to flee. We have two options: flee Colombia or shut up,” says Morales.

“We can’t say anything because it’s also not a safe place to report anything, because the more we say the faster they will kill us. They’ll accuse us, disappear us or put us in prison.”

Despite her harrowing experience, Morales says she will continue to fight fracking and keep trying to raise international awareness on the plight of her fellow land defenders.

“I want my home to be in peace and that we can live in peace, so that the children of Colombia can raise their voices without them ever being extinguished,” she says.

“I want there to be no more fracking in Colombia. And I want them not to kill us for being activists.”