How can climate finance reach war zones and help to build peace?

Sponsored content: Researchers share how smarter climate finance can support some of the most vulnerable people living with the impacts of both climate and insecurity 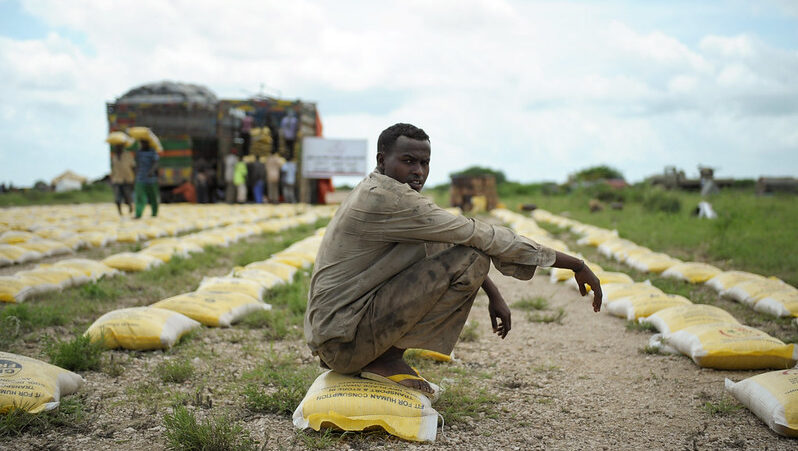 A man sits on a bag of rice for people displaced by flooding and conflict in Somalia, 2013 (Pic: UN Photo/Tobin Jones)

By Catherine Wong and Yue Cao

Climate change often hits the poor hardest and is felt most profoundly in fragile and conflict-affected settings, which suffer high vulnerability and low investments in coping capacity and adaptation.

The first line in addressing climate-related security risks must be ambitious, inclusive mitigation and a just transition to low-carbon pathways.

A recent study Climate Finance for Sustaining Peace: Making Climate Finance Work for Conflict-Affected and Fragile Contexts by the United Nations Development Programme (UNDP) and the Climate Security Mechanism increases understanding in access to climate finance in conflict-affected and fragile contexts. The report looks at ways to leverage the co-benefits of climate action for peace and security, strategies for mainstreaming climate-related security risks into climate finance and makes recommendations on how to make climate finance work more effectively in fragile and conflict-affected settings.

Supporting Pastoralism and Agriculture in Recurrent and Protracted Crisis (SPARC) carried out complementary research Exploring the conflict blind spots in climate finance adaptation on access to climate finance in fragile and conflict-affected settings. This research focused on the Sahel and Horn of Africa, with a high concentration of fragile and conflict-affected countries.

For many vulnerable countries on the front lines – including conflict-affected and fragile contexts – adaptation remains the imperative of today and tomorrow. Both mitigation and adaptation in these regions are delimited by the degree of climate finance ambition, and it is clear that conflict and fragility are key factors in accessing climate finance and in how implementation interacts with drivers of fragility and insecurity.

While additional mechanisms are in place to support the least developed countries (LDCs), around 70 percent of fragile states are LDCs and around half of LDCs are also included in the World Bank’s Harmonised List of Fragile Situations. There is an important element in countries affected by conflict and fragility that is not as clear-cut as income levels: violent and armed conflict can lead to the destruction – sometimes willful – of energy, water and productive assets and capacities needed to deliver climate action.

Conflict-affected and fragile regions often suffer the loss or lack of climate and environmental data-related capacities and hydro-meteorological services, which means they can have inadequate early warning systems. Sanctions may also curtail their access to sources of international financing and clean technologies.

SPARC findings highlight that between 2010 and 2018, more than half of the countries in the Sahel and Horn of Africa received less adaptation finance per person than the average for LDCs, at US$2–13 per person in fragile and conflict-affected states versus US$18 per person in LDCs. This was despite fragile and conflict-affected states sharing similar levels of socioeconomic development with LDCs, but ranking at the top of climate vulnerability indexes.

Both the UNDP-Climate Security Mechanism and the SPARC research show that the more fragile a country is, the less climate finance it received, supporting the idea that climate finance is risk adverse and often not reaching the most vulnerable.  Areas within countries also face similar challenges. The SPARC research highlighted how climate adaptation programmes in Mali, Somalia and Sudan have tended to avoid areas affected by conflict and fragility. This means highly vulnerable populations are being ‘left behind’.

The pattern of underfunding of climate adaptation in fragile and conflict-affected settings is due to risk perception and management processes. These, in turn, are limited by a lack of climate change strategies and policies specifically addressing conflict and fragility, and insufficient investment in cultivating human resources to address the challenges at this nexus.

To avoid maladaptation and increase co-benefits in fragile and conflict-affected settings where resources are shared and risks are indivisible, locally led design of programming initiatives and more cross-border and regional approaches are needed. Exercising greater conflict sensitivity, including a broader understanding of the impacts of climate and non-climate induced conflict and security risks on climate action, can improve risk management. Equally, qualification of co-benefits or peace dividends can incentivise much-needed investments in fragile and conflict-affected contexts, the most severely affected of which are among those that have the least access to climate finance.

More can be done to mainstream climate-related security risks into climate finance architecture, starting with greater intentionality in the design process. This could include the use of special vehicles or pathways and requests for proposals to kickstart pipelines of projects with dual climate and security benefits.

The convening power of funds that already bring together diverse stakeholders could be leveraged to include peacebuilding actors and the creation of platforms to engage peace and security actors. These could be similar to platforms already established to address other challenges such as the Global Environment Facility’s Global Wildlife Program and the United Nations Climate Technology Centre and Network. These could support exchange, innovation and mainstreaming priorities in the funds’ country-level programmes to help set goalposts for project development.

But technical changes alone will not suffice. We also need political solutions to conflict and policy solutions where the specific requirements of fragile and conflict-affected settings are elevated in global policy discussions and climate negotiations, like those of the Small Island Developing States and the LDCs.

In contexts affected by the dual burden of climate change and insecurity, insufficient climate finance investments can exacerbate vulnerability to climate-related security risks, while the cost of adaptation will also continue to increase over time without ambitious mitigation. In this regard, in the years since COP 15 in Copenhagen in 2009, the international community has struggled to get over the US$100 billion a year mark in climate finance. All the while, the Africa Group of Negotiators on Climate Change underlines that the level of financing for climate change is actually in the realm of  US$1.3 trillion a year from 2025.

Beyond this, fragility and conflict impact climate finance access and outcomes. So success will not only be measured by delivering on much-needed financial commitments but also by making sure climate finance traverses the last mile to support climate-vulnerable countries suffering conflict and instability. In fragile and conflict-affected settings, we have to make sure that climate finance is also an investment in sustaining peace, security and stability.

This post was originally published on SPARC Knowledge, and was sponsored by Supporting Pastoralism and Agriculture in Recurrent and Protracted Crises (SPARC). See our editorial guidelines for what this means.