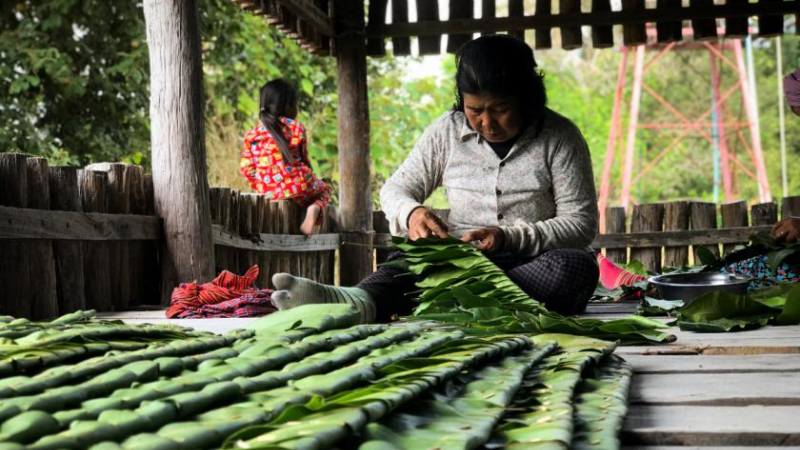 A community member makes roof fronds out of leaves from the surrounding forest. (Photo: UNEP)

Locally led adaptation is fighting rainfall variability and unsustainable practices across a number of community protected areas in Cambodia.

Through reforestation, the planting of drought-tolerant rice varieties, and the use of effective irrigation systems like pumps and tanks, villagers have been able to adapt and mitigate against the worst impacts of climate change and the influence of anthropogenic activity.

Cambodia sees increasingly erratic rainfall patterns which drastically affect the crops of communities: 80% of which are reliant on agriculture for their livelihoods. Illegal logging further exacerbates the problem by destabilising land and reducing its ability to regulate natural irrigation and maintain cultivable soil.

“The big trees that used to be here attracted the rain, but when they went, we found we had no water and our area was drying up,” said Yuth Thy, a local farmer.

A United Nations Environment Programme project, financed by the Adaptation Fund and executed by Cambodia’s Ministry of Environment, is fighting against these impacts and has trained thousands of people to adapt and, more importantly, lead on such efforts in the future.

“Locally led adaptation is when the community or stakeholders affected are in the driving seat when it comes to identifying their issues, being a part of the process to decide on the interventions and then playing an active role in implementing the interventions,” said Atifa Manji, programme officer at UNEP. “This is important as it builds the capacity of local groups to take action and sustain the interventions in the long run.”

Training on a number of skills has been carried out in households and schools across the regions, including the construction of home-garden vegetable patches to diversify the agricultural produce of families, as well as improve health and wellness among younger children.

“I have learned about accounts and savings, chicken raising, and tree nurseries,” said Touch Lay Heak, a member of Chiork Boeungprey community protected area who benefits from the project, adding that her work life is easier now as she is able to “do more farming activities and grow more.”

Thuch Ron, head of a Community Protected Area in the region added: “I’ve seen how when this nursery produces seedlings and restores forest cover, we get more rain and a better rice harvest.”

So far almost 950,000 indigenous trees have been planted, nearly 2,000 families have benefitted from increased agricultural yield, and a total of 1,875 hectares of community forests have been improved and restored. Just over 1,500 households across the project sites also reported an improvement in water access after rainwater harvesting techniques were implemented.

“Introduction of new income-generating activities are in and of themselves innovative for these communities,” said Saliha Dobardzic, senior climate change specialist at the Adaptation Fund, “but the mixture and balance  of these which allows communities to hedge their bets during years of extreme weather events, and new community processes that support this, is what is truly innovative.”

“In addition, these communities have established community funds, which allow them to perpetuate these practices so that more members of the community as well as communities beyond this one will be able to benefit from the practices that turn out to be especially successful,” she continued.

The Adaptation Fund is financing a number of other locally led adaptation projects including in South Africa, Costa Rica, Micronesia, Colombia and Uganda and has found that putting local people in the driving seat builds adaptive capacity and resilience to climate impacts.

Last year, the Fund produced a report on locally led adaptation which showcased the power of community-driven efforts and the harnessing of traditional knowledge.

“The study is an excellent example of the valuable knowledge we can delve into and share from the Adaptation Fund’s 14 years of pioneering work on the ground, and represents one of our three strategic pillars – Learning and Sharing, together with Action and Innovation,” said the head of the Adaptation Fund, Mikko Ollikainen, noting that the Fund was one of the first of many international organisations to endorse a set of LLA principles launched in 2021, which also gained attention during Cop26.

“We are very pleased to share this experience with the global adaptation community, to inform the design of local activities and implementation of local decision-making in adaptation projects.”