Comment: The proposed reform to the EU’s farming subsidy programme continues a business-as-usual approach to farming that we cannot afford in a climate emergency 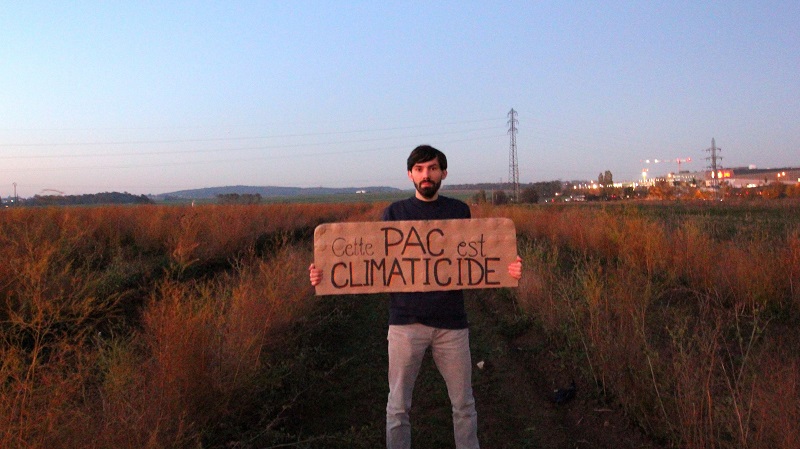 Robin Ehl, 24, protests against the reform of the EU's Common Agricultural Policy in a field in Meaux, France (Photo: Guillaume Bouchain)

It was a Saturday and, at first glance, a climate march like many others: hundreds of thousands of people took to the streets of Paris demanding the climate emergency be taken seriously.

I was among them. Once again, I was urging politicians to implement these abstract and far-away goals of “emission reductions” and “carbon neutrality”.

Since I first took to the streets, plenty of climate promises have been made. But until they are followed through with concrete policies, those promises will remain empty words.

On my way home from the protest, I experienced this gap between promises and action when stopping to buy food for dinner.

In the fruit and vegetable section of my local store, I have the choice between regional produce, and fruit and vegetables that are available all year around and have been cultivated in large greenhouses in Spain, Italy, or Greece before they were wrapped in plastic and transported thousands of kilometers by truck.

While I am conscious of the carbon footprint of those tomatoes and peppers and the poor working conditions of the employees producing, picking and packaging them, one criteria matters most in my decision of what to buy: they are a lot cheaper.

As a student, I have no choice but to opt for the cheapest option. The same reasoning applies when I decide to eat at the canteen of my university, where cheap food is served regardless of its origin, quality or the seasonality of products.

Like me, millions of EU citizens have to make this decision every day: to buy the cheapest available food or to prefer regional and organic produce that are much more expensive.

The number of people who struggle to make ends meet at the end of the month has increased during the coronavirus pandemic and the situation is compounded by rising energy prices. Most people certainly cannot afford to spend more money on food.

But a reform of the European Union’s farming subsidy programme, the Common Agricultural Policy (CAP), could increase support for small-scale farmers, organic agriculture, and low-emission agricultural techniques that preserve biodiversity.

The CAP was originally designed in the 1960s to increase agricultural production in Europe, where memories of food rationing and malnutrition caused by the Second World War were still very present.

In this regard, the CAP certainly did a good job, but the context has changed significantly since then. With agriculture responsible for 13% of the EU’s greenhouse gas emissions, the sector has to significantly cut its emissions if the block is to reach its 2050 net-zero target.

The EU’s own auditors found that the CAP is failing to cut the agriculture sector’s emissions despite billions of euros worth of subsidies under the programme being labelled as climate spending.

But change is possible: CAP funding could be shifted away from farming techniques that harm the environment to support climate-friendly farming, namely organic and small and medium-sized farms.

Subsidies for large-scale industrial farming could be capped and financial support could be made conditional on increasing sustainable production methods.

European lawmakers will vote on new rules for the CAP on Tuesday. This vote is the chance to put the EU’s promises into action.

While Brussels says the reform to the CAP aims to make it greener, the current proposal is far from a holistic shift towards a just and climate-friendly agriculture. Instead, it continues a business-as-usual approach to farming.

Small amendments and tweaks to the CAP are no longer sufficient to respond to the scale of the climate emergency. A profound reform is needed.

As such, I call on members of the European Parliament to vote against the proposed reform and return to the negotiation table. Many promises have been made – now it is time to deliver on them with concrete policy changes.

Robin Ehl is a climate justice activist and the international secretary of the French youth movement, Jeunes Écologistes. He is studying for a master’s degree in European Studies in Paris.