Sponsored content: A coalition of indigenous organisations is helping communities advocate for their land rights and empowering women to manage natural resources 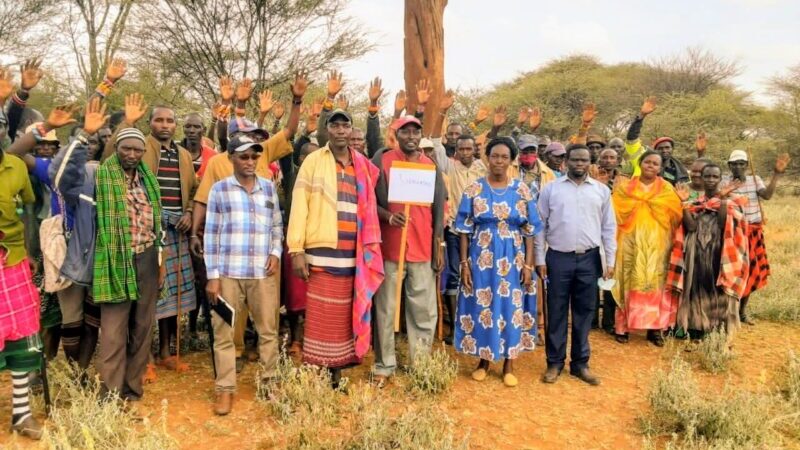 Historically, discriminatory land reforms and disregard of the customary tenure system have denied Indigenous Peoples and rural community members in Kenya the legal right to own and manage their lands.

These practices, combined with long-standing systems of oppression and marginalisation, threaten their livelihoods and render them vulnerable to exploitation by major infrastructure projects and extractive activities.

In late 2016, under pressure from land rights activists and organisations, the government of Kenya passed the historic Community Land Act, enabling communities to secure legal title to their traditional lands. The Act included a measure to ensure women, youth, and ethnic minorities have a role in managing the land. But getting a progressive law on the books is one thing; implementation is another story.

Fortunately, Indigenous Movement for Peace Advancement and Conflict Transformation (IMPACT) and its partner organisations are taking the lead to bring the Act to life, by supporting communities to manage their lands sustainably and to demand their rights under the new law.

In recent years, mega-infrastructure projects and large-scale investments have placed unprecedented pressure on land historically managed by pastoralists in northern Kenya. These pressures affect their rights as Indigenous Peoples, and by extension, their food and livelihood sovereignty.

Mali Ole Kaunga is the director of IMPACT, which works in Kenya’s arid North and supports communities to secure land rights through the Community Land Act. IMPACT also has a three-year strategy to strengthen Indigenous women’s leadership, as they recognise women are powerful change agents in their communities. The organisation believes secure land leads to a secure future for pastoralist communities, despite the increasing impacts of climate change in Kenya’s arid and semi-arid regions.

“If we can secure community land, then communities will have the agency to organise and manage the resources in ways that are most effective for their way of life,” Kaunga said.

To create sustainable and community-led climate resilience solutions, IMPACT launched an alliance of Indigenous organisations. This coalition, known as the Pastoralists Alliance for Resilience and Adaption in Northern Rangelands (PARAN), organises pastoralist communities to advocate for their rights, builds capacity to manage natural resources, fosters Indigenous leadership, and preserves traditional cultures and livelihoods. PARAN started as a coalition of seven organisations and in three years has grown to more than 25 members.

IMPACT has received support from The Christensen Fund and the Climate Justice Resilience Fund (CJRF), among others, to support their efforts to secure land and build voice and power within pastoralist communities. Since 2018, CJRF has awarded IMPACT several grants for a total of $455,000 in support. IMPACT used this funding to form the PARAN Alliance and empower communities to know and assert their rights under the Community Land Act.

Through PARAN, IMPACT and its partners are supporting communities to advocate for the national government to accelerate the implementation of the Community Land Act. In 2019, the coalition worked with Namati to support more than 50 representatives from 11 communities as they marched to Nairobi – twice. The outcome was significant – the Ministry of Lands committed to register the marchers’ land as required in the law, and promised to create a national stakeholder consultation body on community lands. In 2020, the Ministry began making good on this commitment.

Jaron Vogelsang, the Program Director for Namati’s Community Land Protection Program, noted the progress made since land rights activists organised and demanded implementation of the law.

“One of the communities that IMPACT works with, Musul, actually got issued its title deed,” Vogelsang said. “Another major impact is that the government formed a working group focused specifically on this law. So, for the first time, civil society and government came together to think about how to implement the law.”

Legal empowerment has played a crucial role in scaling the implementation of the law. For example, “barefoot lawyers,” or community paralegals, work with communities to meet all the requirements of the Community Land Act, such as mapping the land, creating boundary agreements, and establishing rules for land governance. They also support communities to submit their registration applications to the national government, one of the final steps in registering the land. CJRF contributed $225,000 to Namati’s efforts to train its grassroots group of paralegals. IMPACT and other partners then deploy trained paralegals to empower communities to use the law to claim their rights.

Since the march on Nairobi, four communities have successfully obtained title to their traditional lands, and many more are on their way, having established Community Land Management Committees and bylaws.

Paralegals also guide communities on how to include marginalised people, like women, youth, and ethnic minorities, who, by law, must have a role in managing the land. While the language of the law gives incentive for inclusion, Vogelsang says that without intention the requirement often yields little participation from overlooked groups.

“There’s a quota for the number of women, ethnic minorities, people with disabilities, and youth that should be on community land management committees, which is a great start,” Vogelsang explained. “However, just requiring that in a law can lead to tokenism.”

Namati, IMPACT, and other Kenyan organisations have partnered together to ensure marginalised groups have the voice and power to demand their rights. For example, while working with Samburu Women’s Trust, paralegals ensure that women participate in registration and writing bylaws; this ensures women can voice their concerns during Community Land Management Committee meetings.

Matito Leriso has seen the change firsthand. Working to secure land rights in her community of Lengurma in Isiolo County, she says the Samburu tradition denies women the right to voice their issues. But since her community has worked with paralegals, attitudes have shifted.