Sponsored content: Scientists and musicians come together in a new experimental project using ‘data sonification’ to understand the sound of climate change 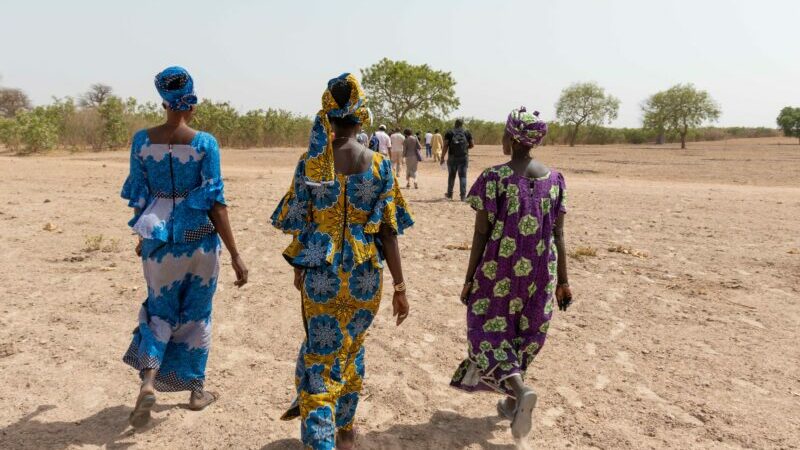 Community members from the Daga-Birame climate-smart village in the Kaffrine region of Senegal during a fieldtrip as part of the AMMA-2050 annual meeting in 2019 (Photo: Future Climate for Africa)

If you could take a year’s worth of rain gauge readings from a city in Ghana, and transform the information into a musical track, what would it sound like?

What would the tune sound like if the data were to show the rainfall that the same city might expect a century later, based on computer-generated climate projections of a warmer world?

A group of scientists and musicians have teamed up to use the process of ‘data sonification’ to do just that, using climate model data from cities in the West African countries of Niger and Ghana to create tracks that demonstrate musically how the climate will shift away from the historic norm within the next century.

The aim is to mix musical tracks based on climate-related data that will raise awareness amongst audiences about West Africa’s changing climate, while still having the emotionally evocative pull of a groovy tune.

One of the first experimental tracks to be produced by a collaboration of Ghanaian and UK meteorologists from Future Climate for Africa and musicians draws on climate model calculations of present-day temperature and rainfall and projected data for the Ghanaian city of Kumasi, which is about 250 km north of the capital Accra.

The musical track, which is a little over three minutes in length, starts with the guitar chords and an accompanying drum beat. As the track progresses, the notes of a synthesizer appear, with an additional bassline and vocals of team member Freddie Gadrie who works for the Ghana Meteorological Agency (GMet), in Accra, Ghana, and who moonlights as a singer and musician.

The ‘sonification’ technique takes the historic temperature data from Kumasi for the year 1997, and translates these into the keyboard synthesizer sounds. As the track progresses, the mix introduces vocals and an added bassline to show the arrival of the rainy season, explains Martin Parker, a maths student and musician at St Catherine’s College at the University of Oxford who worked on the project with his father, Douglas Parker, who is a Professor of meteorology at the University of Leeds and part of the FCFA collaboration.

The first two-thirds of the track represents the historic and ‘normal’ weather data for the city. As the track reaches just over two minutes in, the sound quality begins to distort and become ‘noisy’. This is where the track begins to reflect how the projected temperature and rainfall for the year 2097 has shifted away from the historic norm, as projected by climate models.

An attentive ear will hear the uncomfortable discordance, this a sonic way of demonstrating how the climate here will shift outside of today’s lived experience of weather.

As the track progresses, the voice of Ghanaian meteorology Professor Benjamin Lamptey is overlaid onto the music, giving a recorded message about the importance of fostering resilience within communities so that they can better cope with climate shocks.

Data sonification is a legitimate way to represent data, explains Prof Douglas Parker, who gives the example of a heart rate monitor as a demonstration of sonic data.

The idea behind this experiment is not just to produce a scientific exercise, though, says Parker, but to merge the climate data with the aesthetics of music in a way that can elicit an emotional response in the listener.

An exercise like this can have different purposes, he says. It can sell an educational story and can also activate people in the way that protest music like that of Bob Dylan and others did in the United States during the Vietnam War. It can also be an artistic activity that people can listen to and enjoy.

Prof Benjamin Lamptey’s time as the Acting Director-General of the African Centre of Meteorological Applications for Development (ACMAD) in Niamey, Niger, contributed to initiating the team’s first experimental track.

With this one, the team took four climatic variables for Niamey from the year 1997 — temperature, relative humidity, wind speed, and rainfall levels — and used the sonification process to rework this data as music.

Where the Ghana track has more of a West African musical style, the Niamey track is in the electronic dance music genre. In this composition, two keyboard instrumentals represent the temperature and humidity information for the Niger capital, while the percussion represents the rainfall and the bass delivers the wind data. The first half of the track is the musical rendition of the 1997 weather data, while the second half slips across to reflect the kind of shifts to these weather parameters that the city may experience a hundred years from then, and where the music becomes clashing and discordant.

The track also has a recording of Lamptey, this time reflecting on the importance of collaboration and research in order to boost climate resilience.