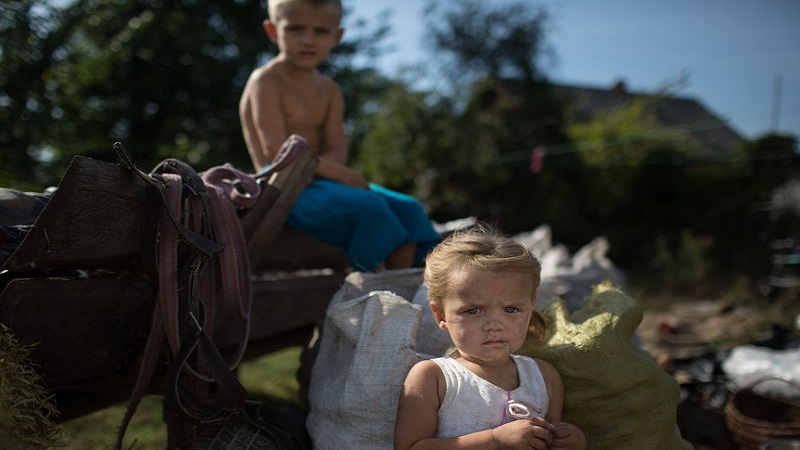 Children in the village of Vezhytsia in Ukraine (Photo: Denis Sinyakov/Greenpeace)

Ukraine plans to reduce its emissions slightly while growing its economy, reducing poverty and fighting a war with Russia, according to its latest climate plan.

Environment and natural resources minister Roman Abramovsky told Climate Home News through a translator the target was only possible with “huge decarbonisation based on unit of GDP”. The government’s recent national economic growth strategy projects annual economic growth of up to 7% a year and industrial development.

It is the “first ever real ambition from Ukraine”, according to government adviser Oleksei Riabchyn, who has represented his country at several UN climate negotiations.

As with many ex-Soviet countries, a 1990 baseline makes Ukraine’s emissions reductions look impressive. But they largely result from the economic collapse which followed the Soviet Union’s disintegration, rather than climate policies.

Ukraine’s previous nationally determined contribution (NDC) to the Paris Agreement, submitted in 2016, had a 2030 target of just 40% below 1990 levels. This would have allowed a large rise in emissions from today and was judged “critically insufficient” by Climate Action Tracker, aligning with more than 4C of global warming, not the “well below 2C” goal of the Paris Agreement.

“Under all approaches consistent with limiting warming below 2C, [Ukraine’s] emissions should be steadily decreasing,” said Climate Action Tracker.

Acknowledging the criticism, Abramovsky said “we are almost sure that, hopefully, the current NDC will be much closer to the 2C scenario”.

Anna Ackermann, a campaigner from Kiev-based Eco Action said the target was “much better than the previous one… but of course it’s also not over-ambitious… To keep the world at 1.5C, the emissions should be halved by 2030 globally and every country has to contribute. So the 2% reduction promised by Ukraine does not correspond to this global need.”

She added: “Taking into consideration the existing huge potential to decrease emissions by introducing energy efficiency measures and developing further energy generation from renewables, the 2030 target is, from my perspective, quite easily achievable.” Ukraine has lots of big, draughty old blocks of flats.

Abramovsky said the target was “quite ambitious” compared to other developed countries on the basis of emissions intensity.

Who is most ambitious?

Depends on the baseline…

“Another aspect is that we have to achieve all that in the context of Russian aggression,” Abramovsky said, “we have to spend unfortunately a lot of state resources to protect our territory and in peaceful conditions these resources could go for energy efficiency and other social problems in Ukraine”.

A Russian occupation of parts of Eastern Ukraine makes it difficult to determine the country’s total emissions levels and impossible for Kiev to implement climate policies in regions it does not control.

“When the territories come back, we have to review and reassess the action plans and greenhouse gas emissions for those territories. Of course, there’s a question in what kind of condition they will come back and what will have to be done in terms of redevelopment, reconstruction and revitalisation. We don’t see any other way of development of these territories other than new technologies,” he said.

Ukraine’s emissions reduction target is conditional on access to €102bn ($120bn) of finance. Abramovsky said the government was reforming investors’ rights and integrity to encourage private investment, including in green projects. It will bid for funding from the EU, US, World Bank and European Bank for Reconstruction and Development. As its classified by the UN as a developed country, it is not eligible for funding from the Green Climate Fund.

The climate plan is also conditional on “stable and predictable trade policy and the absence of restrictions and barriers” from developed countries, a coded reference to the EU’s proposed carbon tariff on imports of certain products.

Abramovsky said: “Such kind of external mechanism would create more difficult conditions for modernisation and it would complicate achievement of the goals.”

Ukraine is trying to negotiate special treatment with the EU, as a member of the “energy community”. Ukraine is one of the biggest exporters of cement, steel and electricity to the EU and these commodities are all covered by the carbon border tax.

On energy, Abramovsky said Ukraine plans to ramp up renewable energy, keep nuclear generation at more than 50% while gradually phasing out coal in a way that doesn’t devastate mining communities.