Flooding in the central province of Henan can be linked to human influence on the climate, but Chinese media is not making the connection 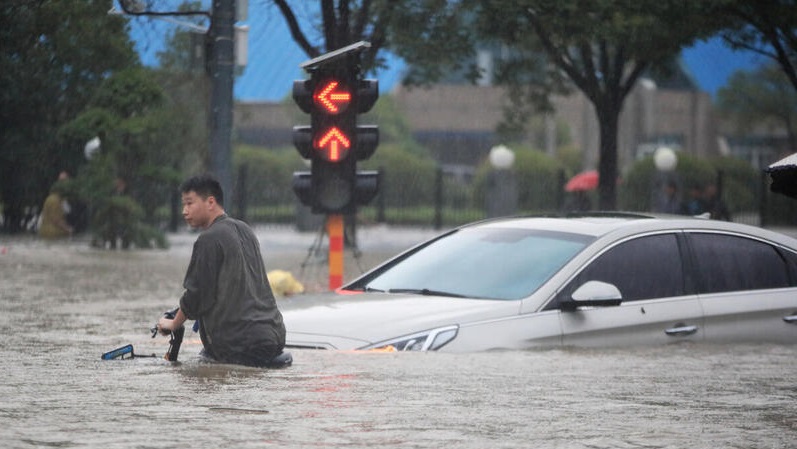 Record-breaking rainfall has killed at least 25 people in the Henan province of central China, with more people missing and further casualties expected.

Henan’s capital Zhengzhou was hit by 201.3mm of rain in a single hour on Tuesday, exceeding the Chinese record set in 1975, according to the provincial met office. Some weather stations recorded more rain over four days than they typically get in an entire year.

Twelve passengers died as rainwater filled up Line 5 of Zhengzhou’s subway system. Footage shot by survivors shows commuters waist-deep in water holding tight to their carriages’ handrails and perching on low walls at the edge of the subway as water gushes through the tunnel.

BREAKING – Heavy rain pounded the central Chinese province of Henan, bursting the banks of major rivers, flooding the streets of a dozen cities including Zhengzhou and trapping subway passengers waist-high in floodwaters pic.twitter.com/JSxYhz1k5a

Above ground, several videos show people swept away by water being rescued and cars being washed away. Crops and buildings were destroyed, food ruined and residents evacuated.

5. video thread of Henan flood
A drowning women secured by other residents from flood pic.twitter.com/2yxFWhdYQm

According to a tunnel engineer who spoke to privately owned Chinese magazine Caixin, tunnels are usually designed to withstand what were judged to be once-in-fifty-year rain events at the time of construction. Making them able to withstand rarer rainfall events is more expensive.

Caixin reported that the storm’s path was unpredictable and station staff may not have been able to deploy sandbags and steel gates to keep the rainwater from the steps of the subway stations.

Once it has entered the subway through stairs, lifts and ventilation grates, the engineer said it can only be removed through drainage and electric pumps. This is particularly true for circular subway lines like Zhengzhou’s Line 5, where water can’t exit at the end of the line.

Water in subways presents a risk of electrocution – but losing electric power turns off the subway’s ventilation system and drainage pumps, Caixin reported.

The carnage comes nine years to the day after 79 people were killed in a rainstorm in Beijing, collapsing roofs and downing power lines.

Climate change has made flooding more common and more severe. As the air heats up, it can hold more water vapour, which is released as rain.

2/3: A woman rescued in flood waters in Zhengzhou, Henan (video from WeChat). pic.twitter.com/6fOblgl5OL

This trend is particularly pronounced in the mid-northern latitudes, including most of China and Europe, where flooding killed almost 200 people last week.

As the Arctic warms faster than the rest of the world, the temperature difference has decreased, weakening the typical air movement from west to east. This means weather hangs around for longer, explained Stefan Rahmstorf, chair of earth system analysis at the Potsdam Institute for Climate Impact Research. One day of heavy rain can become two or three, overwhelming a city.

Chinese politicians, state and social media have largely ignored the link between climate change and the flooding. Greenpeace East Asia’s Li Shuo told Climate Home News that coverage had focussed on the severity of the flooding and how to deal with the aftermath.

“But,” he said, “there is a general sense that something very unusual is happening. This, together with Germany and North America[n heatwaves] will wake people up.”

He said China’s climate action has been traditionally been based on economic and diplomatic considerations. “I don’t think these will change,” he said, but in time “impact and risk have the potential to become a new one”.

A 2020 academic study said that, despite the increasing popularity of subways and the increasing risks to them of climate change, not enough research had been done into the risk of flooding to subways.

The study suggested that hydraulic barriers could help prevent flooding, as could raising the height of pedestrian access points to the subway.

This story was changed after publication to remove an incorrect conversion from mm to metres.