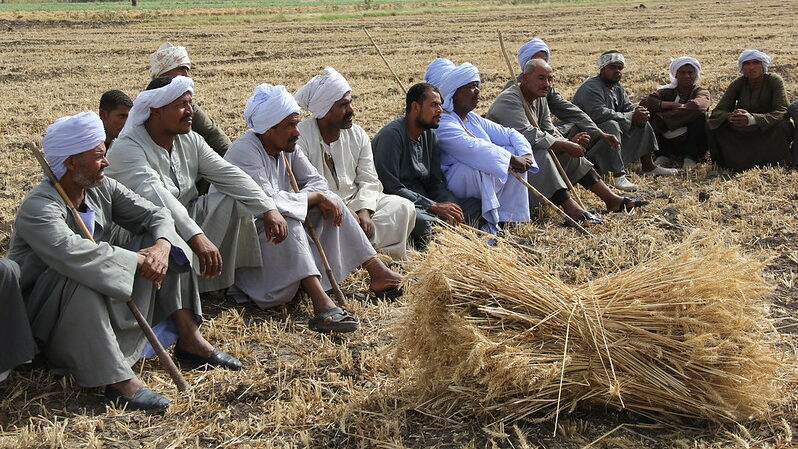 A climate adaptation project, which promotes transformative farming techniques and enhances resilience through early warnings for extreme weather on the banks of the River Nile, is being replicated and extended.

The programmes, “Building Resilient Food Security Systems to Benefit the Southern Egypt Region” and phase 2 by the same name, are financed by the Adaptation Fund (AF) and aim to support the livelihoods of smallholder farmers in the face of climate change.

Egypt faces significant socioeconomic challenges and is vulnerable to the impacts of climate change. This is particularly the case for Assiut, Sohag, Qena, Luxor, and Aswan; the five Southern governates at the heart of the two projects.

According to a report by the World Food Programme’s Egypt Country Office, the Southern region alone stands to lose up to 30% of its food production by 2050 as a result of reduced crop and livestock productivity, drought, and pest infestation, all of which are rooted in rising temperatures and unpredictable weather.

Implemented by the United Nations World Food Programme, the projects target these issues.

“Phase 1 of the project aimed to introduce adaptation solutions to support vulnerable smallholder communities of Southern Egypt to face the effects of climate change and has successfully built climate resilience for about 49 communities,” said Ithar Khalil, Programme Manager at the World Food Programme.

The Adaptation Fund visited the project in 2017, and its implementation was completed last year. It was a successful project, as the project finalisation documents showed that the implementers were able to overachieve on most of its set targets and metrics.

“Building on this success, Phase 2 which will start later in 2021 aims to further extend climate resilience to 15 new communities within the region,” Khalil added.

The main focus of the first phase, which ran between 2013 and 2020, was developing adaptive technologies in agricultural production and water saving irrigation.

For the former, heat and drought tolerant varieties of wheat and sorghum, largely in the Lake Nasser region, were used to combat desertification, and this saw a proven reduction in climate-induced productivity loss and a 25-30% drop in the need for fertiliser or excessive water use. This was accompanied with changes in sowing timeframes and intercropping, as well as the promotion of growing high value medical and aromatic plants that consume less water.

The process was made more efficient through rehabilitating canals and lining them with concrete to smooth flow and cut down on water seepage, allowing farmers to irrigate land more easily and at a lower cost due to the reduced need for pumping. “I have been working for fifty years as a wheat harvester and have not seen production of this high quality and quantity,” said Fathi Al-Hagag, a beneficiary living in Aswan, speaking of the 30-35% boost in farmer’s income seen under the programme.

The project also included the development of post-harvest practices such as using sun-bed drying units for tomatoes and the deseeding of pomegranates, both which have a much higher sell price than without such interventions.

“My life differed a lot from the past since I started working on tomato drying,” said Aisha Abdelfattah, a Luxor-based farmer, adding, “the project helped me and many other people of the region to work in different fields to help them increase their income.”

The adoption of early warning systems also played an important role in the application of technology, helping to reduce losses from extreme weather events. Units were established in 49 villages across the region and provide 5 days of forecasting with dissemination through installed loudspeakers, mobile tricycles, and an android app, as well as through the use of mosque and church microphones.

Phase 2 aims to expand on the previous work in new regions to widen access and raise awareness of developed technological practices. Additional practices are being introduced such as laser levelling of the soil, raised bed cultivation, and the planting of other heat tolerant crops.

Over the last couple of years, the Adaptation Fund has funded several projects that promote technology to help communities become more resilient. In Uruguay, for example, a project included training and technology transfer to help small farmers use appropriate technology options for sustainable use of natural resources, including integrated livestock management, better water and shadow infrastructure, improved pasture management and biodiversity conservation. In Uzbekistan, an AF financed programme is training locals to build self-sustaining greenhouses, while another project through the Fund’s innovation grants is improving food and water security with new market technologies in Antigua and Barbuda’s agricultural sector that utilise self-generating renewable power to facilitate availability of ground or surface water.

“Very often Adaptation Fund projects are the first climate projects on the ground in many vulnerable places throughout the world and these projects contribute significantly to building long term resilience to climate change with concrete actions,” said Mr. Mikko Ollikainen, Head of the Adaptation Fund, adding, “they foster localised solutions that can involve the introduction of technologies that are most appropriate for those communities and have transformative impact.”

“Sometimes it can be a tried and true technology like rooftop water harvesting or drip irrigation that hasn’t been applied there before, while other times it can mean a newer technology that is breaking further ground in adaptation.”